The Globe just reported Tuesday California State Senator Melissa Melendez (R -Lake Elsinore) introduced an Anti-Discrimination bill package aimed to protect against cancel culture discrimination. Concerned about the growing climate of intolerance, her two bills protect Californians from discrimination because of political affiliation,” and “affirms Californians are supported in their right to open dialogue and diversity of thought” in education.

Shortly after the article published, we noticed that Assemblywoman Lorena Gonzalez (D-San Diego) posted a scorched-earth screed on Twitter clearly directed at Melendez’s bills to fight the growing ‘cancel culture’ movement in the state.

Gonzalez said: “I don’t know who needs to hear this today, but: Your racist, pro-domestic terrorism, xenophobic, misogynistic views do not warrant protection “from discrimination.” Your choice to hate & actively pursue hate does not make you part of a protected class.”

I don’t know who needs to hear this today, but: Your racist, pro-domestic terrorism, xenophobic, misogynistic views do not warrant protection “from discrimination.” Your choice to hate & actively pursue hate does not make you part of a protected class.

Shutting down voices that you don’t like is not how free speech works in America, and even in the People’s Republic of California, because the 1st Amendment grants absolute protection for even vile speech that offends, as long as it does not incite violence.

Gonzalez calling Republican Senator Melendez and all right-of-center voters “racist, pro-domestic terrorism, xenophobic, misogynistic” is foul and rather disgraceful for an elected state lawmaker, but it is protected speech.

Assemblywoman Lorena Gonzalez obviously considers right-of-center and conservative speech offensive, but she doesn’t get to be the arbiter of who decides when it should be shut down – even as a lawmaker in California.

At some time in our lives, we’ve all witnessed ugly bigotry, and wish the ignorant bigots would just shut up. But most good people turn and walk away. However, the left, and far too many Democrat politicians, of late, try to use public bigotry as an opportunity to encapsulate all of the right, to silence any opposition. This is the reason for Sen. Melendez’s bills.

For the same reason Assemblywoman Gonzalez has the “freedom” to make her hateful screed on social media, we have the right to push back and and call her words “hateful.” Thinking differently doesn’t make some speech wrong. But as an elected lawmaker screeching it shows her authoritarianism. And Californians have every right to be wary of her intentions.

A Twitter follower asked: Who is the unbiased arbiter; who decides what constitutes “racist, pro-domestic terrorism, xenophobic, misogynistic views.” The “racist” term especially gets thrown around in nearly every argument by some, even against those who actively oppose discrimination.”

Assemblywoman Gonzalez, the author of the freelance job-killing Assembly Bill 5, also told Tesla founder Elon Musk to “Go f*ck yourself” on Twitter when he threatened to move his company and 10,000 jobs out of state over lockdown restrictions. 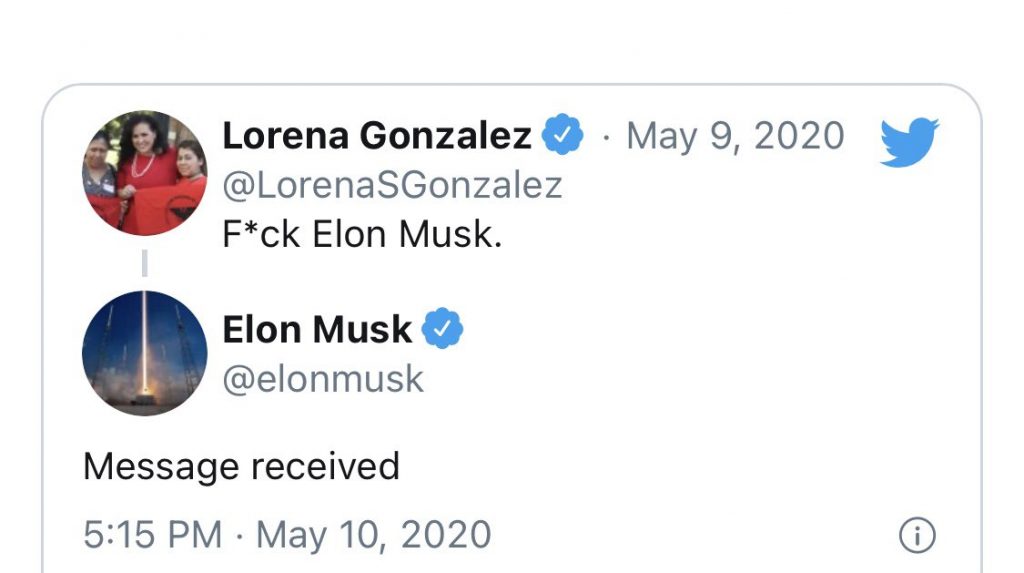 Assemblywoman Lorena Gonzalez’s noxious Tweet is perhaps the clearest example of why Senator Melendez’s bill is called for.

Supreme Court Justice Samuel Alito explained in a 2017 Supreme Court decision, “Speech may not be banned on the ground that it expresses ideas that offend. Speech that demeans on the basis of race, ethnicity, gender, religion, age, disability, or any other similar ground is hateful, but the proudest boast of our free speech jurisprudence is that we protect the freedom to express ‘the thought that we hate.”

Perhaps one of the most powerful Twitter responses was this: “Your entire political identity is based on the advancement of racism deeply entrenched in your dark Marxist political views and the public policy you advocate.”

Your entire political identity is based on the advancement of racism deeply entrenched in your dark Marxist political views and the public policy you advocate.

Fools are everywhere in society, and we even find them in our family, friends, co-workers, and elected officials.

“Cancel culture and the efforts to silence differing opinions and voices should be a growing concern for all of us,” said Sen. Melendez. “A climate of intolerance has been established and has stifled healthy and normal debate. Anyone who values their own freedom of speech should be concerned. This cannot and should not be allowed to continue.”

“This is the most transparent example of her politics,” said another Twitter responder.

This is the most transparent example of her politics.

“Ridicule is the first and last argument of a fool,” a British politician said many years ago.