Home>Articles>California Borrowed $20.5 Billion From Feds For State Unemployment Payments
28 May 2021 2:40 am

Not many Californians know that California borrowed $20,501,188,129 billion from the federal government to pay unemployment claims. This loan will be repaid by the state and California employers.

The California Legislative Analyst’s Office issued a report Wednesday about this loan which shows that California’s loan was 40% of the total $51,568,130,856 billion in loans 17 states borrowed. The next closest state, New York, borrowed $9 billion – less than half of California’s loan. 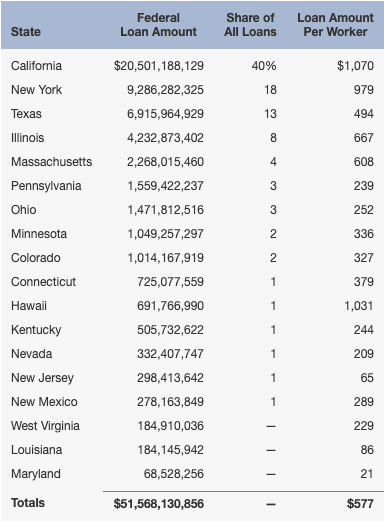 In November, District Attorneys from across California exposed the massive unemployment benefits fraud in jails and prisons in California, calling it “the biggest fraud on taxpayers in California history.” Millions and quite possibly billions of dollars in unemployment claims was sent to inmates in California’s county jails, and state and federal prisons, while legitimate claimants have been stiffed for months.

The Globe spoke with several California unemployment claimants who reported that for months they didn’t received their benefits, and were continually put off for additional weeks by EDD employees. One said he was told by the EDD he had to provide his 2019 Federal tax return before his claims could be processed.

By January, the Globe reported as much as $31 billion may have been stolen by fraudsters, identity thieves and foreign criminals in unemployment benefits from California.

How will California pay this back?

The LAO explains how this $20.5 billion loan will be paid back:

To illustrate state and employer costs to repay the federal UI loans, our office produced a low-cost and a high-cost forecast of the state’s UI system based on different underlying economic scenarios. Under the low-cost scenario, employment quickly returns to pre-pandemic levels and interest rates remain historically low for the entire period. In this scenario, the state’s unemployment rate settles at a low 4.5 percent and the federal interest rates on UI loans averages 2.5 percent for the repayment period. Under the high-cost scenario, the state’s economic recovery is delayed several years, with unemployment remaining above 6 percent until 2025, and interest rates paid on the UI loans increase gradually to 4.5 percent after the recovery has taken hold.

Why did California borrow $20.5 billion from the federal government? The LAO explains:

Under Both Scenarios, Federal UI Loans Would Take Many Years to Repay, the LAO reports.

The LAO also says “under current federal law, the federal UI payroll tax rate on employers will increase by 0.3 percent for tax year 2022. However, employers will not pay this higher rate until 2023 when employers remit their 2022 payroll taxes to EDD.”

The Governor’s 2021‑22 May Revision budget proposes $36 million General Fund to pay the first, partial payment on the state’s outstanding federal Unemployment Insurance (UI) loan and proposes to direct $1.1 billion in federal American Rescue Plan (ARP) Act funds to pay down a portion of the outstanding loan.

However, employers would not benefit from these lower costs for many years.

Obviously the amount of this federal loan the LAO is addressing is a staggering amount, together with the number of years that employers will be pay this back.

$1.1 Billion Repayment Would Lower State Interest Costs and Employer Costs… But Provide No Near-Term Economic Relief to Employers or Workers. Due to how federal law sets out the employer tax repayment structure, the Governor’s proposed $1.1 billion deposit would not benefit employers or their employees until well after the pandemic has ended. As discussed above, under our main projection, the earliest that the $1.1 billion deposit could provide business payroll tax relief would be in 2030.

Not only isn’t Gov. Gavin Newsom committing to help annually, but he’s using the one-time federal funds – the $1.1 billion in federal American Rescue Plan Act funds – to pay the federal government. The LAO even noted this: ” (Technically, the $1.1 billion payment will be made from the state’s Coronavirus State Fiscal Recovery Fund,)” the LAO said.

Meanwhile he is proposing to spend a billion dollars more annually on MediCal for illegal immigrants, rather than the state’s still-suffering small businesses.