On September 8, Sacramento’s District 4 Council Member Katie Valenzuela and Mayor Darrell Steinberg published a letter online condemning the murder of 61-year-old Land Park resident Kate Tibbits by a homeless man named Troy Davis.  Davis is also accused of raping Tibbits, killing her two dogs, and setting her house on fire, as the Globe reported.  He has a long history of criminal charges, including being charged on June 22 with vehicle theft for which he was arrested, but then released without bail which he subsequently failed to appear for in court.

In the letter, Ms. Valenzuela and the Mayor expressed their frustration and anger and said:

“The suspect in this crime had been incarcerated as recently as June 2021, with a known addiction to methamphetamine and a history of violent offenses. We cannot simply release people from state prisons and county jails onto the streets without working harder to ensure that they are getting the treatment and services they desperately need to prevent them from harming themselves or others.  Further, based on his criminal history, we have serious concerns about how this individual was released from custody in the first place. He should not have been on the street.”

They ended the letter by saying, “Our system is broken. We’re committed to continuing to work together to make this better for everyone.”

Certainly, all residents of Sacramento should be frustrated and angry about this horrifying crime, and the details of Davis’s release need to be fully determined and reported.  But to the extent the system is broken and needs to be fixed, Ms. Valenzuela’s actions in her brief public career make it clear she is the wrong person to be involved in that process.

In April 2020, three homeless people were arrested for breaking into and living in an unoccupied Land Park home that was being renovated and had a “For Sale” sign in the front yard.  Homeless activists, including at least one from an organization called the “Anti-Police Terror Project,” somehow were present when the officers removed the trespassers from the home and arrested them.

Sacramento attorney Mark Merin, who may be associated with Ms. Valenzuela on homeless issues, was quoted by the Sacramento Bee saying, “These people will probably be going right back there and this time it’s gonna be a community activity event and a political statement and not just an act of a few desperate people.  I think what we’re gonna see here is an escalation of a move to take over abandoned dwellings, especially those that are corporate-owned as this one was.”

So, this attorney advocates for and justifies homeless people breaking the law?

But did Ms. Valenzuela disagree with the actions of the homeless people or with Mr. Merin?  No. Apparently supporting the three homeless trespassers, she was quoted in the same Bee article saying, “This isn’t me moving into your house when you’re on vacation or me taking over the home you’re living in, this is a campaign against corporate-owned properties, which is a very different conversation than someone who just has a rental and is having trouble finding someone to rent it to right now.”  So, from her point of view it was fine for them to break the law because the victim was a corporation.

In June of this year, Ms. Valenzuela hired Skyler Henry, whose real name is Skyler Michel-Evleth, to be her Council Representative, a paid City position.  He was a podcaster who before Ms. Valenzuela hired him had made threatening comments in his podcast after US Senator Krysten Sinema voted no on the national $15 minimum wage bill.  He said, “You should be terrified for the rest of your life.  You should never be able to leave your house if that is how you’re going to use your position to govern. And like, to me, the same thing sort of applies with the mayor and the city manager of this city (Sacramento). It’s like no, no, no, you don’t get to do that. You do not get to make the decisions that you have made over and over and over again to the detriment of everybody who lives here and then go home to your little f—— little McMansion in Natomas and like have a good night’s rest. I’m sorry, you don’t get to do that. You do not have a right to that. Absolutely not.”

Henry’s comments about the Mayor and City Manager referred to demonstrations outside their homes during which both homes were vandalized.  So from his point of view, it is acceptable for people to commit property violence against an elected city official and a city manager because of a disagreement with their decisions.  What was Ms. Valenzuela’s position on that?  She was quoted by the Bee, saying, “He’s entitled to his opinions and First Amendment Speech.”

Certainly Mr. Michel-Evleth was entitled to his constitutional right of free speech, but that does not make his speech or the violence he condoned acceptable and certainly should have disqualified him from employment by the City of Sacramento.  Yet Councilwoman Katie Valenzuela refused to fire him. 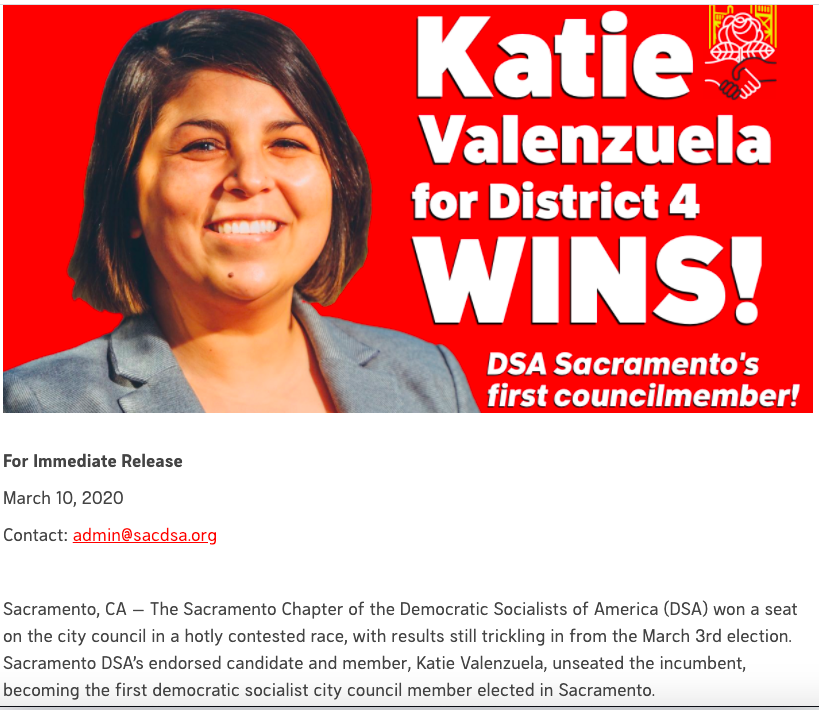 What do the Democratic Socialists of America stand for that is relevant to the murder of Ms. Tibbits and Ms.Valenzuela’s potential role in trying to fix the broken system?  The DSA held its 2021 convention this summer and passed a set of resolutions, in line with the national DSA.  Resolution #3 is entitled, “Empowering DSA’s Mass Abolition Work.”  Here are excerpts from that resolution:

“Whereas, The Democratic Socialists of America’s mission is to build a multi-racial working class movement to win socialism and to defeat capitalism (and previously) passed resolutions in support of police and prison abolition, decriminalizing sex work, and abolishing cash bail…

“Therefore be it resolved,

So, Ms. Valenzuela belongs to a political organization the stated goals of which are to pass laws preventing employers from asking job applicants about their criminal history (that’s the “Ban the Box” movement), abolish cash bail and pretrial detention, and defund police departments.  Also, she has supported people breaking the law when the victims are corporations and hired someone to be on her staff at taxpayers’ expense who promoted terrorizing public officials and damaging their property.

Is Ms. Valenzuela a person Sacramento’s citizens should want trying to fix the criminal justice system?  Is she even a person that District 4 residents still want as their council representative? 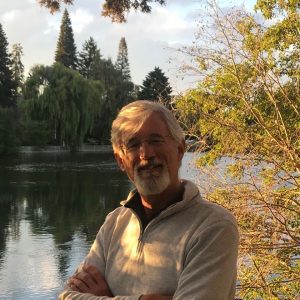 Latest posts by Brian Powers (see all)
Spread the news: