Home>Articles>Do the Numbers in the Coronavirus Outbreak Justify Tanking the Economy?
22 Mar 2020 10:15 am

Perusing the daily headlines alerting readers about the Coronavirus outbreak could make anyone want to self-quarantine. But the numbers aren’t the entire story when broken down.

Deliberate omissions of important information tell the full story: Coronavirus is spreading, and more people are dying. The virus primarily attacks the elderly who have underlying health issues.

But the increase of positive cases don’t mean those individuals are sick – just that they tested positive.

How many people are on earth? Because this is the total number of coronavirus cases and deaths in the entire world.

As of 2018, the Santa Clara population count was 1,933,383. “Santa Clara County saw 67 new cases of coronavirus in a single day, a jump of more than 33 percent from Friday, which brings the total amount of known cases to 263, county officials announced Saturday” the San Jose Mercury News reported. Guess why Santa Clara saw a jump in new cases of Coronavirus?

They now have more tests and the ability for rapid responses to the tests. An honest headline might have read: “The increase in Coronavirus cases is in large part due to a greater testing capacity.”

Buried in the article is the actual number of deaths: “The death toll in Santa Clara County remains at eight.”

“Though officials say the sharp increase in cases could be in part due to a greater testing capacity, it has prompted the Santa Clara District Attorney to ask residents to report people and businesses that are in violation of the county’s shelter in place order.”

Stories abound on social media of people posting photos of businesses open, then being publicly shamed on Facebook, Twitter and Instagram into closing. This is Brown shirt activity if ever.

The headline in the Los Angeles Times Sunday: California coronavirus death toll rises to 27, including four in L.A. County.

The LAT reported “the individuals who died were both older than 65 with underlying health conditions.”

The Orange County Register headline: Orange County’s number of coronavirus cases jumps by 13, now up to 78. With more tests being conducted and processed quicker, more are testing positive for coronavirus, as Dr. Anthony Fauci said would happen. Fauci is an American immunologist who serves as director of the National Institute of Allergy and Infectious Diseases and as a member of the White House Coronavirus Task Force. 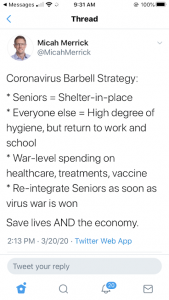 There are more than 3 million residents of Orange County.

It’s not a stretch to say the Orange County Register reported this way in order to sound dire: “As of Friday, Los Angeles, Orange, San Bernardino and Riverside counties altogether reported 394 cases and six deaths coming from COVID-19.”

However, there are no deaths from coronavirus in Orange County or San Bernardino County; the deaths are in Los Angeles County (4) and Riverside County (5).

San Bernardino County and Riverside County each has a population of more than 2 million.

California Gov. Gavin Newsom sent a letter to U.S. President Donald Trump Thursday, claiming, “California has been disproportionality impacted by the repatriation efforts over the last few months,” and 56% of Californians will contract the coronavirus.

‘Save Lives and the Economy’

Meanwhile, the California economy is tanking as most businesses have been forced to shut down under orders from Gov. Newsom and city Mayors, calling these “non-essential” businesses.

Many of these businesses will not rebound back.

California officials should focus their efforts and quarantining on the known vulnerable – the elderly, those in nursing homes and hospitals, and anyone known to have lung diseases or serious illnesses.

The numbers can’t possibly justify politicians tanking the economy because of a need to publicly virtue signal to the media. Many business owners are wondering if the haste with which government took over and forced the closure of commerce across this state and country was really about saving lives.

10 thoughts on “Do the Numbers in the Coronavirus Outbreak Justify Tanking the Economy?”