California Gov. Gavin Newsom is facing a recall election this fall. This week, the RecallGavin2020 campaign turned in more than 2.1 signature petitions to recall the governor. Almost immediately, Newsom launched a campaign to fight the recall, calling it a “partisan, Republican recall — backed by the RNC, anti-mask and anti-vax extremists, and pro-Trump forces.”

The Newsom “Stop the Republican Recall” campaign sent out this mass email Friday proving just how tone deaf he is, insulting millions of California voters. Several CA Globe readers received the email and shared it with us: 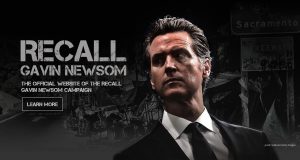 “I am writing to let you know that earlier this week, we launched our campaign to stop the Republican recall attempt in California. I am not going to take this recall attempt lying down. I’m going to fight because there’s too much at stake in this moment.

And today, I am asking you to join me:

Please add your name to say you oppose the far-right Republican recall effort in California. It is critical you make your voice heard from the start of this effort.

First and foremost, I need you to know I am not going to be distracted from the critical work we have to move us forward in California. That means getting more vaccines in people’s arms, more people back to work, and more kids back in the classroom.

But that means I need your help defeating this recall effort.

And let’s call it what it is: it’s a partisan, Republican recall — backed by the RNC, anti-mask and anti-vax extremists, and pro-Trump forces who want to overturn the last election and have opposed much of what we have done to fight the pandemic.

If they are successful, it would mean risking the progress we are making to end the pandemic. We can’t let that happen.

California cannot afford to be sidetracked by partisan political games. So we’ll fight this recall for the reason I am fighting to get every Californian vaccinated — because ending this pandemic as quickly as possible is too important to get delayed by Trump loyalists and far right-wing Republicans.

But I cannot do that alone.

Add your name: say you oppose the Republican recall effort in California. This is important.

Thank you for joining me in this effort. It means a lot to know that we’re in this together.

There is only one way we defeat the far-right Republican recall effort in California — and that is together. Say you’re with Gavin:

Add your name to say you oppose the Republican recall in California.

PAID FOR BY STOP THE REPUBLICAN RECALL OF GOVERNOR NEWSOM.

As the Globe reported, The recall campaign did a study on a sampling of 20,000 of the recall signatures to see what the political party breakdown was. Recall campaign organizer Orrin Heatlie said 31.5% of the signers were “other than Republicans,” showing that this is a bipartisan event.

A friend who received Gov. Newsom’s email said this:

“But honestly, it’s not only COVID that brought me to sign the recall petition. It’s the fires, the releasing of inmates, and allowing healthcare for all the illegals (we have many friends that have immigrated here LEGALLY… what a slap in the face to them). Then add COVID on to that and he should be gone.”