As California’s unionized government tightened the screws on everyone who works for a living, responsible citizens have become increasingly disgruntled.

The preliminary election returns reported on March 4th – the day after the election, and the day when we used to get final returns – indicate that California’s voters delivered a stunning rejection of new taxes and borrowing. It’s about time.

At the state level, Prop.13 which would have authorized $15 billion in general obligation bonds for schools and colleges, required a simple majority for approval. But as of March 9th the “yes” votes only stood at 45.6 percent. This is unprecedented. As reported by Cal Matters, “since 1998 voters have passed five state school bonds, including a $9 billion measure in 2016 that Gov. Jerry Brown opposed.”

While Prop. 13’s likely failure is surprising enough, the dismal fate of hundreds of local bond and tax proposals indicates a broader shift in California’s electorate. One state school bond may fail for various reasons, but that’s only one data point. On the other hand, California had 121 local school bonds on the March 3 ballot. The returns on March 4th had 86 of them falling short of the 55 percent threshold necessary for passage, nearly 70 percent. That’s a lot of data points.

Local taxes didn’t do much better. Of the 111 local tax measures proposed, voters as of March 4 were rejecting 65 of them, or nearly 60 percent. The table depicted below uses data compiled by CalTax as of March 4th. It shows that local school bonds, had all of them been accepted by voters, would have piled $18.5 billion in debt onto California’s taxpayers, more than Prop. 13. 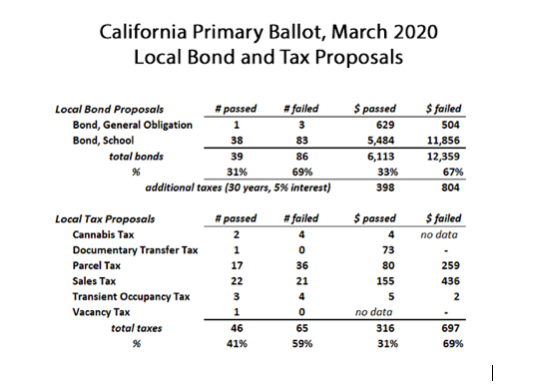 These preliminary March 2020 election results amount to a near inversion of tax and bond approval rates compared to previous elections in California. In November 2018, November 2016, and November 2014, California’s voters were reliable supporters of local bond and tax measures. Across those three elections, voters approved local school bonds at a rate that always exceeded 80 percent, and they approved local taxes at a rate that was consistently at or close to 70 percent.

The previously mentioned Cal Matters article suggested that voters may have confused the 2020 Prop. 13 school bond with the famous 1978 Prop. 13 which froze property taxes. “That presented an opening to philosophical opponents,” wrote author Ricardo Cano, “such as the Howard Jarvis Taxpayers Association, which likened the measure to a tax increase.”

First of all, the fact that the 2020 Prop. 13 had the same number as the historic 1978 “Prop. 13” might have been misleading in both directions. After all, for several decades, opponents of new taxes in California have made the centerpiece of their agenda a desire to “protect Prop. 13.” Why wouldn’t low information voters with anti-tax inclinations simply vote yes on Prop. 13 to protect it?

Of course, it could be that “low information voters with anti-tax inclinations” is an oxymoron. Fair enough. But the second half of Cano’s assertion is even more debatable.

The reason the Howard Jarvis Taxpayers Association “likened the measure [Prop. 13] to a tax increase” is because it is a tax increase. Refer again to the above chart and consider the row “additional taxes (30 years, 5 percent interest).” Based on March 4th election results, the annual payment on just the school bonds that passed, $398 million per year, exceeds the projected annual collections on the local tax measures that passed, $316 million. How is this not taxes? Who will make these payments of principle and interest?

As a result of California’s voters suddenly displaying a petulant reluctance to approve billions in new taxes and borrowing (also taxes), two things are certain. First, the recent measures enacted by California’s legislature to “improve turnout” and “ensure voting access” and “prevent vote suppression,” are about to bear fruit. Because a lot of these local tax and bond measures remain “too close to call.”

Back in the Pleistocene period (you know, the 20th century), California’s electorate suffered under the barbaric indignity wherein if you wanted to vote, you had to register at least six weeks ahead of time, and you voted on election day at a polling place unless you had a compelling reason to request an absentee ballot. This was based on the troglodytic assumption that people who cared enough to vote would make these simple arrangements. The problem, of course, is that responsible citizens who are capable of making these simple arrangements don’t reliably vote the way California’s unionized government bureaucrats want them to vote. As California’s unionized government tightened the screws on everyone who works for a living, responsible citizens have become increasingly disgruntled.

For this reason, California’s legislature, which for all practical purposes is under the absolute control of these unions, realized something had to be done if their insatiable desire for more money could be realized. They took it upon themselves to permit voting by ballots that are mailed anytime up until midnight on election day. They enlisted the support of that paragon of efficiency and probity, California’s Dept. of Motor Vehicles, to automatically register licensed drivers – only if eligible, of course – as voters. They implemented same day registration and voting, so they could canvas neighborhoods and campuses right up until and during election day to register voters and enable them to vote. They even legalized “ballot harvesting,” so they could go door to door and collect ballots from lazy voters who hadn’t yet voted, and deliver those ballots to a polling place for them.

Housebroken pundits do acknowledge the impact of these laws, but are too potty trained to acknowledge the negative consequences. As if the fact that legalizing these practices, and, presumably, eliminating any possible fraud that is invited by these practices, results in nothing that might be legitimately questioned. “Conservatives tend to vote early,” they’ll say, and that’s supposed to be the end of it.

In the short run, Californians, thanks to efforts to goose the electorate in the name of “voter access,” may expect another billion or two in debt via school bonds, once final results are available and certified on April 10th – 38 days after the election.

In the long run, California’s legislature is doing everything it can to remake its electorate into a reliably socialist voting bloc, as they deny the lessons of history.

The other thing that is certain as a result of California’s voters becoming less willing to cooperate with their ravenous government bureaucrats is that we can expect more local tax and bond proposals in November and from now on. Far more.

To understand why this is, consider King City Union School District, in Monterey County. Their voters on March 3 had two measures to consider. Measure A will approve a $19 million bond to pay for “campus safety,” and alongside that is Measure B, which will also borrow $19 million, to “modernize classrooms.” Perchance to make these classrooms safer? As of March 4th, both were too close to call. But double your measures, double your chances.

It is redundant to cite yet again the litany of failures logged by California’s state and local governments just in the past few years, much less the accumulating long train of abuses over the past few decades. But Californians of all ages, incomes, ethnicities and genders are awakening, and alas, it isn’t the compliant, manipulable, programmable “woke” that was planned for by California’s government unions and their plutocratic partners. The next few years should be very interesting indeed.