Home>Articles>Questions We Should Ask our Future Sacramento County Sheriff and District Attorney
16 Mar 2022 6:32 am

Sacramento County and our state is at a crossroads. With rising crime, the highest population of individuals experiencing homelessness, businesses suffering due to smash and grab robberies, these public safety positions are more important than ever before. The sheriff and district attorney are non-partisan roles, as they should be. The public safety and overall quality of life of Sacramento County should not be a partisan issue. Further, public safety in neighborhoods have a direct connection to property values, which dictates the amount of property taxes assessed to fund key county operations. With all these things in mind, there are a few questions we should be asking our next sheriff and district attorney.

Why are you running?

This is an important question of any official. How they answer will help guide voters to understand their motives in running, regardless of how many times they’ve given their standard elevator speech. There are career politicians simply seeking their next position of power. There are people who are funded by people of power. There are people who genuinely want to roll up their sleeves and work to better their community. The way a candidate answers this question is a good start to differentiate between the candidates.

What will you do to address homelessness?

Businesses, residents and communities alike are all feeling the affects of homelessness in our county. We have passed billion-dollar bonds and supported policy after policy. The United Nations likened the homeless problems in our state to that of a third world country. We need to ask our future sheriff and DA how we can actually address this issue, and not give us lip service, or throw more money at the problem.

How will you fight against rising crime?

The sheriff and District Attorney can give a voice to the voiceless. They stand as the first line of defense for their communities and can use their platform for good. This can be a multitude of things such as addressing crime policies or advocating for effective recidivism opportunities. How do we bring every aspect of the discussion to the table to move forward as a better, more prosperous county?

How will you lead the people who didn’t support you?

Once these individuals are elected, especially in the sheriff and DA positions, they are the top law enforcement official in the county for the people who did and didn’t support them. As a non-partisan election, this is much deeper than a simple party-line vote. We need to ask our future sheriff and DA how they will be a leader for their entire community, while also reuniting the organizations under them to keep morale up.

What do we do to bridge the gap between minority communities and law enforcement?

What we have learned in the past few years is that both our law enforcement and minority communities have been thrown into a political whirlwind. The problem is, after the elections or the political whirlwind is done, there is no infrastructure to pick up the pieces. Bridging the gap seems to be reactionary only, an afterthought, until something goes wrong. This is a problem for both law enforcement and disenfranchised community members. Our future sheriff and DA should have a plan on how to bridge the gap.

Where do you stand on Senate Bill 54?

This bill should not have been political. In 2017, Senate Bill 54 was passed to restrict local police and sheriffs from assisting or cooperating with federal immigration authorities, when individuals who committed a crime were in the county illegally. These crimes include rape, assault with a deadly weapon and more. Just this month, a father killed three of his kids and an adult before killing himself at a Sacramento church. The man, who was in the country illegally, was able to do so due to SB 54. This is not political, it is an honest question for our future sheriff and DA to understand where they stand.

Where do you stand on the second amendment, gun crimes and conceal and carries?

Where do you stand on zero bail and how will you bring attention to the issue?

Zero bail was a policy reform from the legislature and executive branch. New York, one of the first no bail states, is currently reassessing the policy – with the new governor asking to bring back bail to reduce the rising crime in the state. Progressive policies to improve the system is admirable, but constant analysis of the policies and how they affect communities is critical.

How will you address BLM and the defund the police movement, while also supporting your men and women in uniform?

Protests and natural distrust have been all too common these past years. Threading the needle between addressing legitimate concerns, while standing up for the safety of communities and law enforcement officers will be necessary in our next sheriff and DA. Our businesses were boarded up, officers’ safety is on the decline – our sheriff and DA needs to be prepared to handle and help the climate they are stepping into.

Where do you stand on use of force policies and officer lawsuits?

The call for accountability is a noble and necessary one. Just like politicians, doctors or any profession, there needs to be a process to hold bad actors accountable. On the other end, officers are also afraid that their only options are being shot, or go to jail for doing their job when use of force is necessary. How will you handle the situation if one of your officers in your county is being questioned for their use of force?

It is said “show me your friends and I will tell you who you are.” The same holds true for these elections. Funding provides policy and political ties to candidates. The closer the funds are to the Sacramento Capitol versus local funds, the more political strings attached, period. In a world of social media, funding doesn’t hold the same weight as it used to. The importance of grassroots, local candidates are more important than ever before. Find out who funds your candidate.

We need to hold our candidates accountable and insist on these answers. Email the candidates so we can all make an educated decision on the future of our county: 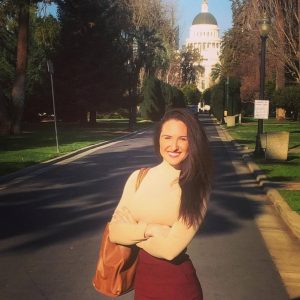 Stephanie Herrera
Stephanie Herrera has worked in politics, public policy and public relations spanning over 15 years. She worked in Washington D.C. for a non-profit, as a publicist for a policy think-tank, and for a PR agency where she worked with non-profit, corporate and government clients. In 2013, Stephanie moved to Sacramento to become press secretary for a newly elected Assemblyman from Orange County. She stayed in the Legislature until 2018, working her way up to becoming the Assemblyman’s Chief of Staff. Stephanie currently works in public affairs for the government sector. In her spare time, Stephanie and her husband started an organization seeking to bridge the gap between law enforcement and disenfranchised communities.

Latest posts by Stephanie Herrera (see all)
Spread the news: