Home>Articles>Republican Campaign Worker Jordan Tygh is Standing Up to Liberal Bullies
18 May 2021 12:46 pm

Progressive leaders claim they stand for tolerance, but in California, where Democrats have supermajority power in the Legislature and hold every statewide office, the political environment that has resulted has not been one of respectful coexistence but one many might describe as downright repressive.

Jordan Tygh is one such citizen after he endured an extreme reaction from powerful liberals simply for doing his job. His job? Tygh, who is also a US Coast Guard veteran and University of Southern California graduate, worked for the Republican Party during the last election cycle and was asked to coordinate a get out the vote program in his then home of Orange County.

Following what he thought would be a harmless social media post about ballot drop off boxes the GOP had set up, Tygh was subjected to threats and abuse from elected officials, liberal social media personalities, and even celebrities, who went after the young staffer. While it’s routine that in the heat of campaign season parties and campaigns clash, the intensity with which Democrats went after not the GOP itself, but a junior staffer personally is notable.

“I’ll never forget (former CA Secretary of State) Alex Padilla going on TV saying he would work with local authorities to arrest anyone involved, which would have been the entire CAGOP,” Tygh said. “He was ready to use his government office to arrest his political opposition who was not breaking the law. This is what dictators in third world countries do.”

Late night host Jimmy Kimmel even put Tygh’s picture on TV urging in his October 14th monologue, “they should stuff him in that box, is what they should do.”

What caused such hysteria? The Republican ballot boxes were a type of “ballot harvesting,” a procedure where campaigns and activist organizations gather ballots and then turn them in on the voters’ behalf. Ballot harvesting is a political innovation put into effect by Democrats, with Democrat Assemblywoman Lorena Gonzalez’s Assembly Bill 1921.

AB 1921 was signed into law by former Governor Jerry Brown in 2016 over the objections of Republicans. Democrats have since used the practice to gain an edge over Republicans in campaigns, because Republican voters often prefer to turn in their ballots in person.

Such hypocrisy is just one reason Republicans say this whole episode was nothing more than an attempt at voter intimidation. The lawsuit Democrats filed over the ballot boxes was dropped following the election.

However, not content to let progressives get away with this smear campaign, Tygh is fighting back. He’s working with prominent First Amendment attorney Harmeet Dhillon to hold the parties responsible to account and he’s telling his story.

Tygh has also set up a GoFundMe to help cover his legal costs and is inviting those concerned with preserving free speech for California conservatives to donate. 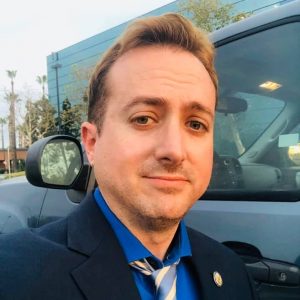 Eric Eisenhammer
Eric Eisenhammer is a Roseville-based communications and technology entrepreneur and is co-founder of the Placer County Taxpayers Association.

Latest posts by Eric Eisenhammer (see all)
Spread the news: