Last week the Globe broke the story that Sacramento City Councilwoman Katie Valenzuela had just announced a new hire to her city staff: Skyler Henry, “Sacramento born and raised man of leisure, producer and co-host for @voicesrivercity, musician, maker of films,” according to his Twitter page. Henry is the co-host Voices of River City, a self-described “Leftist news & truth-to-power commentary from #California‘s capital” tied to extreme organizations like the “Sactivists.”

It’s only been one week, but last evening Skyler Henry received a call from someone in the City of Sacramento informing him they will be seeking a restraining order against him from entering City Hall. 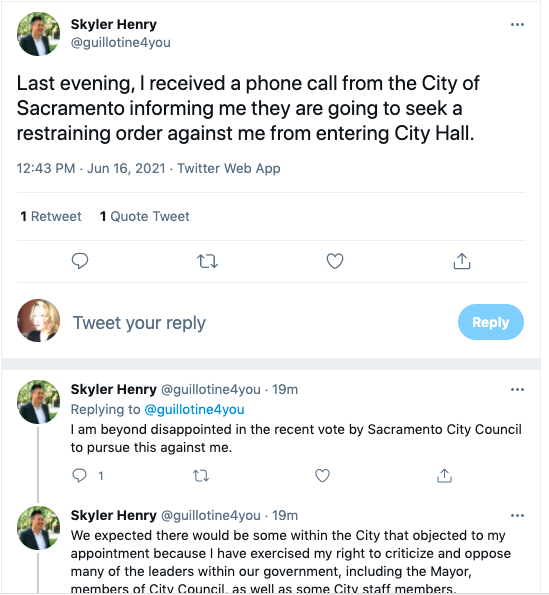 This restraining order came on the heels of Councilwoman Valenzuela posting this note on her official Facebook page, defending her hiring choice of Skyler Henry: 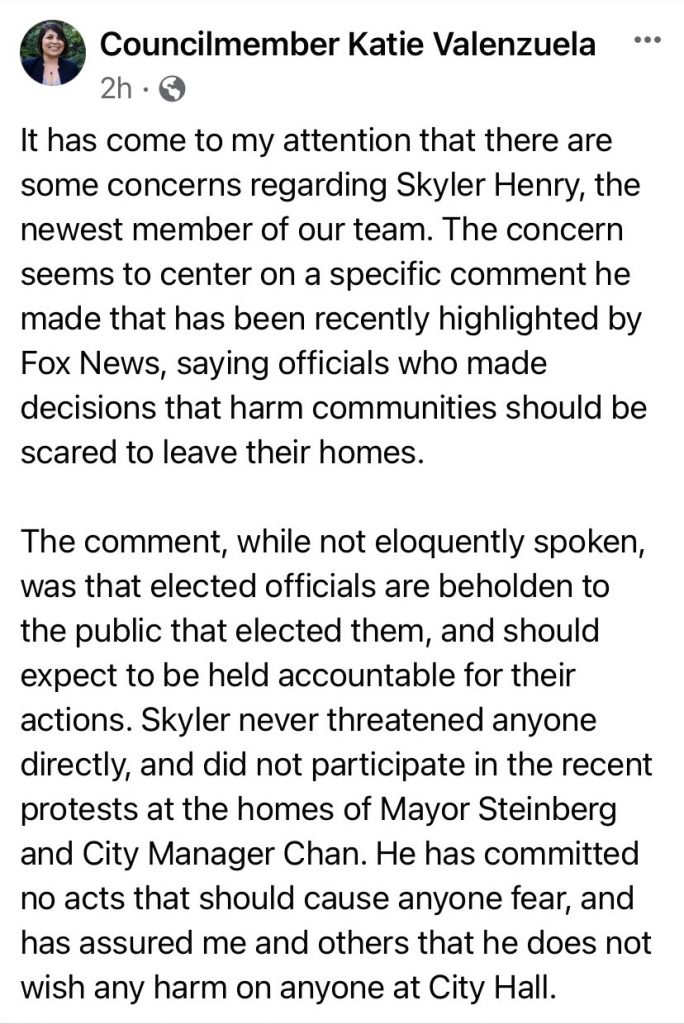 Valenzuela ended her note with, “In the end, we have to be able to work with people we disagree with. Taking time to understand and engage with folks with different opinions makes our government and decisions better. I am glad Skyler was interested in making the transition to public service, and I look forward to working with him to make Sacramento a better place.”

Following that was a strange news story by CBS Local about Skyler Henry, titled “City Hall Hire Skyler Henry Prompts Unusual Promise Of No Threat To Colleagues Safety.” CBS reported, “Councilmember Katie Valenzuela is defending the hiring of a new staff member that’s left her assuring people at city hall he means no harm to them.”

What was strange is that CBS said, “Henry’s one-time podcast comments have suddenly turned controversial since his hiring by Valenzuela.”

And in the next sentence CBS reported his support for destructive protests and vandalism: “His recordings show his support for protests that turned to vandalism at Mayor Steinberg’s home. Recordings also capture comments he made after two council member’s homes were hit by vandals, with red paint.”

This entire controversy stemmed from a story by the Los Angeles Times in April, which wrote about intimidating and violent protests at elected Sacramento officials’ homes in which Henry voiced his support for these actions:

Skyler Henry, a Sacramento musician sympathetic to the “Sactivists,” said two-faced public officials are fair game for such tactics, whether they are city managers or Sen. Kyrsten Sinema, a moderate Democrat from Arizona who recently voted against a minimum wage increase.

**“You should be terrified for the rest of your life. You should never be able to leave your house, if that is how you are going to use your position to govern,” Henry said of Sinema. “The same thing sort of applies with the mayor and city manager of this city.”

Henry’s comments haven’t suddenly turned controversial – the LA Times reported on this in April, and the Globe used their report in our article last week.

No background check for city employee?

Didn’t Councilwoman Valenzuela or a city HR staffer perform any background and past job reference checks on Henry? That’s pretty basic when hiring new staff, even if they are friends or acquaintances.

It’s pretty obvious that Valenzuela didn’t expect any blowback on her new-hire; her lengthy explanation defending her decision makes this clear. However, that she felt compelled to issue the statement shows she was perhaps somewhat cavalier, and ill-prepared.

A colleague did some basic background checking on Henry and came up with this: “In searching online to find Skyler’s employment information, there isn’t much. He has no Linkedin account that I can find and his Facebook employment history is sparse. We did find a news photo from 2007 showing him as “Skyler Michel-Evleth” working at the Pine Cove Liquor Store.

It is very curious that he doesn’t use his legal last name. Considering that Councilwoman Valenzuela knew him at least as far back as last year as she was interviewed by him on “Voices River City,” the entire hiring is suspect.

Skyler Henry responded to the restraining order with this statement on Facebook:

I am beyond disappointed in the recent vote by Sacramento City Council to pursue this against me. We expected there would be some within the City that objected to my appointment because I have exercised my right to criticize and oppose many of the leaders within our government, including the Mayor, members of City Council, as well as some City staff members.

The right to criticize public officials was never in question; government watchdogs and journalists do that daily. What Skyler Henry, and Councilwoman Katie Valenzuela didn’t understand, is that there are consequences to some forms of speech; specifically, verbal threats and the threat of violence.

While the First Amendment guarantees every person the right of free speech, that right is not absolute, the Heritage Foundation explains. Some words “by their very utterance” cause injury or incite an immediate breach of peace, and they do not receive constitutional protection. Unprotected speech involves “true threats,” statements in which a speaker expresses a “serious” intent “to commit an act of unlawful violence to a particular individual or group of individuals.” Congress has made it a crime to use interstate communications facilities to make “threats,” the law governing this subject has been unclear.

The majority view of courts is that someone can be found guilty of communicating a threat, even if he did not intend that his words be taken in that manner, as long as a reasonable person would have understood his words as threatening.

If this is the case, was there apparently enough corroboration of threats with Skyler Henry’s recorded body of verbal evidence to cause the City of Sacramento to issue a restraining order against him? By 3:34pm Wednesday afternoon, Fox 40 reported that the City Council voted in favor of the restraining order.