Gov. Gavin Newsom declared a statewide business lockdown and shelter-in-place order on March 19 for the COVID-19 outbreak in the country. However, California’s numbers never spiked as expected, except in Los Angeles, and even there, it was mild compared to other large cities.

Sacramento County has only 60 deaths attributed to COVID-19, out of 1.5 million total residents in the county.

Since then, Newsom has been dribbling out teaser announcements for re-opening businesses, with little to no actual “science” behind the decisions, despite his protestations.

Disingenuous media continue to run misleading headlines claiming an “increase” in COVID-19 cases, such as this by the Sacramento Bee:

Coronavirus cases jump by 33 percent in Placer County as it reopens business, government.

Deep into the article, the Placer County Health Officer Dr. Aimee Sisson contradicts the headline: “fewer than 5 percent of tests are coming back positive over a rolling 14-day period. This is not high enough to warrant imposing stricter social distancing guidelines.”

There still is a recovery rate from the virus of more than 98%, but the media rarely says this.

However, the reporter undermines the county doctor: “Since a surge in COVID-19 cases could result in an overwhelming number of people seeking hospital care, public health officials at the U.S. Centers for Disease Control and Prevention have been keeping tabs on hospital capacity nationwide.”

“As of Wednesday, they said, COVID-19 patients, occupied six percent of California hospitals’ inpatient beds. That adds up to 4,469,” the Bee reported.

However, “According to the CalMatters hospitalization tracker, there are over 3,100 hospitalized COVID-19 patients across the state.” And the bulk of those are in Los Angeles County.

Dr. Sisson explicitly said confirmed “cases” are expected to rise as more testing is done. But cases don’t translate to hospitalization with a 98% recovery rate. 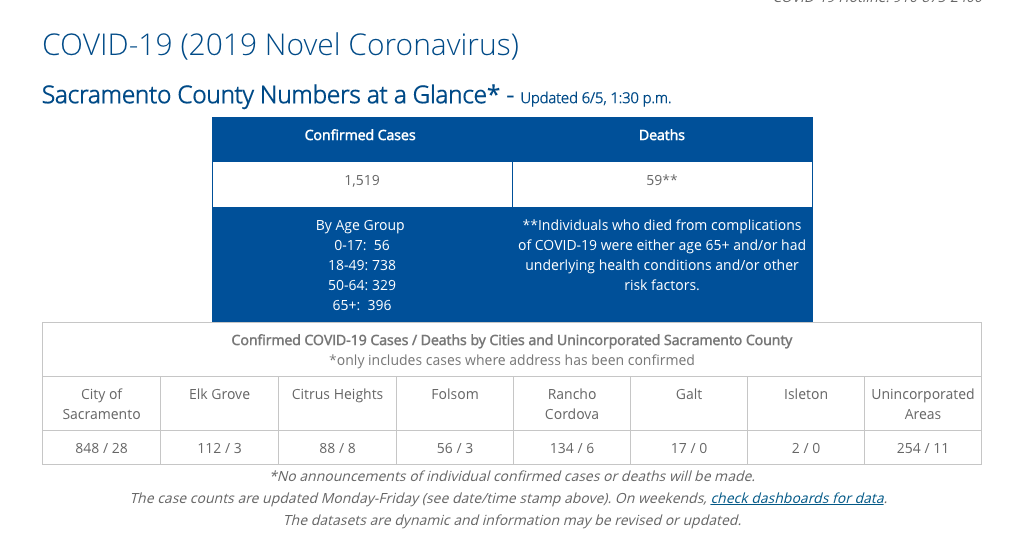 In late April, Californians were told that it could be months before residents would be able to get their hair or nails done, or visit gyms and entertainment venues, according to officials.

“According to Dr. Gahly, counties will only be allowed to move up to the advanced Phase 3 if coronavirus cases remain low, adequate testing is done, and that counties have shown that they are prepared for a greater number of re-openings, as well as being prepared for upticks in the number of cases in case of another outbreak.”

It is apparent to anyone paying attention that Gov. Newsom is trying to keep the state under his thumb in lockdown mode as long as possible – Tuesday, November 3, 2020, comes to mind.

In March, Governor Newsom announced that the lockdown in California would continue on through at least April but also possibly through mid-June.

In April, Newsom announced that the state lockdown would begin to end in only a matter of weeks, fulfilling a prediction he made in March about the lockdown possibly lasting until June.

Also in April it became evident that Newsom was refusing to even put out a tentative re-open date, even as testing of coronavirus infections showed than they were not only leveling off, but dropping. Californians began protesting the lockdown throughout the state.

Early in March, Newsom told Californians to stay at home in order to flatten the curve of coronavirus outbreaks in order to not overwhelm our hospitals. But hospitals in California were never overwhelmed. Emergency rooms have been largely empty, and the state’s 422 hospitals’ ICUs had few actual coronavirus patients each.

The media and government hysteria over Coronavirus overshadowed the 780 people who die each day anyway in California from other causes: cancer, motor vehicle crashes, suicides, homicides, drug overdose, and the top killer, coronary heart disease.

For context, look at the numbers from the Center for Disease Control – actual numbers, and not projections and models:

In the three most populated states, California (40 million), Texas (29 million) and Florida (21 million), with 90 million total residents, there a combined 8,796 total deaths attributed to COVID-19.

The reasons for keeping California even partially closed are not based on science; it is pure politics at this point.