Not once did Sen. Pan ever acknowledge or address vaccine-injured children.

Is it civil discourse to force people to a lifetime of disability?

The question was posed by a Capitol staffer while Senate Bill 276, to eliminate most physicians vaccine exemptions, was being debated in the Senate Wednesday. It passed 28-11. 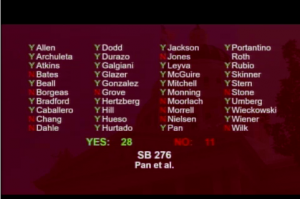 While the importance of civil discourse was discussed along with the merits of the bill, frustrated parents sat in the gallery of both houses of the Legislature. Some booed, some chanted. Floor leaders called for civility in the chambers.

Notably, when protesters are on the side of Democrats, lawmakers often clap and lead them in chants – in chambers.

The primary objection by parents to Senate Bill 276 – it disallows medical exemptions, even for families with previously vaccine-injured children.

Senate Bill 276 would eliminate almost all vaccine medical exemptions, allegedly to crack down on fraud, California Globe reported. “Under this bill, State bureaucrats — not physicians –would be in charge of deciding whether children may receive medical exemptions and thus whether they can attend school.”

Both Tuesday and Wednesday the bill was surprisingly brought to the floor for a vote ahead of amendments Gov. Gavin Newsom wants to add in to the bill. Lawmakers were caught off guard. While they did not break rules to do this, it is disingenuous, and clearly an attempt to jam the Governor. Many are watching to see who stands their ground on this volatile issue.

Recently, in a California Globe op ed, Attorney Mary Holland asked, “When a physician decides that a child is too medically fragile to receive a vaccine, but is not allowed to submit a medical exemption because it is not a listed CDC contraindication, and that child suffers a life-threatening reaction, such as multiple seizures or encephalitis (both listed on vaccine manufacturer inserts), is the doctor liable, or the state official, who denied the exemption?”

Her question was not answered either day in the California Legislature.

The Governor believes it’s important to make these additional changes concurrently with the bill, so medical providers, parents and public health officials can be certain of the rules of the road once the bill becomes law. #SB276 (2/2)

— Office of the Governor of California (@CAgovernor) September 3, 2019

Tuesday, Assemblywoman Lorena Gonzalez (D-San Diego) referred to “fake medical exemptions” when presenting SB 276. She said the bill is “based on science.”

In Wednesday’s Senate debate Sen. Scott Wiener (D-San Francisco) also referred to science. “This is about science, and whether we believe it. We’ve seen it around climate change – there are people who deny science.” Wiener said, “this is unacceptable.”

Tuesday in the Assembly, Assemblyman Adrin Nazarian (D-Van Nuys), who was a co-sponsor of Pan’s SB 277, said SB 276 was an overreach, and wasn’t about the collective health of the state since the herd-immunity level is at 92 percent. “This is an issue of control now,” Nazarian said. With only 1,411 individuals claiming medical exemptions from childhood vaccinations since SB 277 was passed, Nazarian asked, “why aren’t we spending the money in going after that eight percent?” He also noted, “some o our vaccinations haven’t been updated in 52 years.”

Assemblyman Al Muratsuchi (D-Torrance) said SB 276 “is not the right solution. We should focus on the bad actor doctors who may be exploiting the exemptions.”

Each of the legislators who spoke in opposition to SB 276 said they believe in vaccines, and vaccinated their children.

“Sometimes vaccinations have serious complications,” Assemblyman Jay Obernolte (R-Big Bear Lake) said. “It’s rare but it does happen. Parent should be able to make the choice.”

Senator Jeff Stone (R-Temecula), a 30-year practicing pharmacist said, “Immunizations have saved millions of lives.” He noted as an author of Pan’s previous bill, SB 277, “we promised exemptions for children with medical issues.” Stone noted that side effects from vaccines are rare, “but when you see the injuries, they are major. One-size-fits-all doesn’t work.”

A simple solution for doctors abusing exemptions “is to lean on the Medical Board,” Stone said. He questioned why the Department of Health was being given the power to do this instead of the State Medical Board. “It’s an abrogation of responsibility. Now parents will have to appeal to a state bureaucracy and a California Department of Motor Vehicles type of process,” he said.

“Every patient is unique,” Stone said. “The number of exemptions amortized over all vaccinations given… we still have effective herd immunity.”

“Parents say because of this bill, they are already running into doctors offices who won’t touch a valid vaccine exemption request,” California Globe previously reported. “In calling 882 California doctors to ask for a medical exemption for a child who suffered anaphylactic reaction after their 12-month shots, they were told no.”

“Unfortunately at our office we wouldn’t do that for you.”

“Our doctors do not write medical exemptions.”

“We have a strict rule here that all children are immunized without exception.”

Sen. John Moorlach (R-Costa Mesa) weighed in: “Scaring and limiting medical professionals who are trying to prevent anaphylaxis is, in my opinion, legislative malpractice.”

Sen. Pan doubled down in his close: “We all want freedom… without catching a dangerous disease.”

Many are now waiting for Gov. Gavin Newsom’s amendments, as well as the reaction by Sen. Richard Pan.