On June 1st, the Sacramento Municipal Utility District began charging Sacramento electricity users and ratepayers a new rate system that charges residential users higher rates between 5:00 p.m. and 8:00 p.m… much higher rates, just in time to get home from work, feed the family, do a couple loads of laundry, bathe the kiddies, maybe vacuum a room or two, and watch a little Netflix.

SMUD says the goal is to “reduce energy usage,” but they don’t say why. Instead they make suggestions like “start or program your dishwasher, washing machine or clothes dryer to run and finish before 5 p.m. or to start after 8 p.m., or schedule these chores for any time on the weekend when all hours are at the lowest off-peak price.” 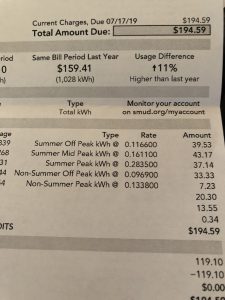 Here is why SMUD needs to lower usage at a higher rate: “We’re committed to providing customers with 60% renewable energy by 2030. And by continuing to add renewables like solar, wind, biomass and geothermal, we plan to be net-zero GHG by 2040.”

And, SMUD is “The first large California utility to have 20% of its power come from resources classified as renewable by the state. We’re on track to exceed 33% by 2020.”

SMUD is “The state’s first carbon reduction goals. We’re committed to reducing greenhouse gas emissions to 40% below 1990 levels by 2030.”

SMUD is “A non-carbon power mix of more than 50% when hydroelectricity is factored in. That figure will approach 80% by 2030.”

The summer peak rates are intended to hurt ratepayers and energy users. Subsidies for solar and solar generating primarily during those hours is double payment from ratepayers.

How else could SMUD afford the subsidies of renewables mandates?  They simply do not want ratepayers to use electricity during those hours.

“We are being challenged through changes like Assembly Bill 32, which lays the groundwork for California’s comprehensive approach to reducing GHG emissions,” SMUD wrote in its Environmental-Sustainability Roadmap 2020. “Utilities and businesses across the state are challenged to change the way they operate and to avoid emerging business risks. In response, SMUD has already started to shift to generating more renewable power from solar and wind to reduce emissions and support resilience.” But nowhere in this “Roadmap” did SMUD explain the energy mix.

For SMUD’s energy mix, I had to go to SMUD’s Power Sources:

SMUD is heavily invested in wind and solar due to legislative mandates, two important but unreliable energy sources, which require traditional electricity backup.

Ratepayer are left holding the bills.

California Globe will contact SMUD for additional information about the legislative mandates, and increasing renewables and rate increases, for a series of articles about California’s increasing energy costs.