Earlier in the year, California lawmakers proposed a $20 billion plan to give California cities funds to combat the homeless epidemic. Gov. Gavin Newsom proposed $12 billion in spending, which seems only to entice more homeless people to move to California, and grow the mentally ill drug addicted street population.

In a May statement, the Governor’s press office said:

In 2019, California had roughly 134,000 homeless people, amounting to one-quarter of the nation’s total homeless population. Some in the state admit to 161,000 homeless now, but looking at the governor’s numbers, it’s clearly much larger.

In April, Gavin Newsom bragged that California set up a national model to “solve homelessness”  by converting hotels into homeless housing. “Project Roomkey” hasn’t exactly been a success, with likely 200,000+ homeless in the state. And reports of scores of unused trailers in several cities isn’t helping.

Untreated homelessness is so bad in Los Angeles, a U.S. District Court Judge ordered the city and country of Los Angeles to offer housing or shelter to the entire homeless population in the Skid Row neighborhood by October.

And that is the real problem – the “homeless” are mentally ill, drug addicted street people who aren’t getting treatment. Many aren’t as much “unhoused” as they are “unsober” and “unhealthy” mentally. A friend in law enforcement said that for most of the drug addicted, mentally ill homeless, they can’t make it in society and never will. They need more than a trailer or old hotel room – involuntary psychiatric care is what mental health experts say is needed.

California’s State Auditor Elaine Howle issued a rather scathing audit in February over the management or mismanagement of Homelessness in California. She said that the state continues to have the largest homeless population in the nation “likely in part because its approach to addressing homelessness has been disjointed.”

Howle said “At least nine state agencies administer and oversee 41 different programs that provide funding to mitigate homelessness, yet no single entity oversees the State’s efforts or is responsible for developing a statewide strategic plan.”

The state’s plan to mitigate homelessness is not designed to achieve this, as the audit shows. Because if the 9 agencies and 41 different programs did mitigate homelessness, they would no longer be needed, the federal and state funding would dry up, and public employee union jobs would be lost. In California, no program ever sunsets.

California has spent $13 billion in just the last three years on the massive homelessness problem. The auditor said the approach to dealing with homelessness is so fragmented and incomplete it actually hinders efforts at getting people into stable housing. And the auditor found the Continuum of Care organizations (CoCs) “do not consistently employ best practices to improve homeless services in their areas. The five CoCs we reviewed do not adequately conduct a comprehensive annual gaps analysis,” the Auditor reported. And two of the CoCs don’t even have current comprehensive plans.”

“Last year, Newsom vetoed a bill that would have created a uniform data-collection system on homelessness spending, saying the measure was duplicative and would create additional and unnecessary data collection costs,” KCRA Channel 3 reported. “However, the auditor found a lack of coordination between agencies, and largely, no accountability by any agency our the task force.”

The Treatment Advocacy Center, whose goal is “Eliminating Barriers to the Treatment of Mental Illness,” issued a recent report on the lack of psychiatric care available in the 50 states. California earned a D- grade.

“Grading the States: An Analysis of U.S. Psychiatric Treatment Laws examines the laws that provide for involuntary treatment for psychiatric illness in each state. For each state, we analyzed whether an individual who needs involuntary evaluation or treatment can receive it in a timely fashion, for sufficient duration, and in a manner that enables and promotes long-term wellbeing.

To do so, we asked a crucial question: Does the state law allow an individual in need of involuntary evaluation or treatment to receive timely care, for sufficient duration, in a manner that enables and promotes long-term stabilization?”

The report explains: “Public mental health is primarily the responsibility of state and local government. State legislatures pass laws establishing the criteria and procedures for when and in what manner the state may override an individual’s refusal of mental health treatment.”

Each state was evaluated on the following criteria and recommendations based on the Treatment Advocacy Center’s analysis of the treatment laws in each state, and key components of an ideally functioning system of mental illness treatment laws.

The raw scores were then converted into one overall letter grade based on total points earned on a 100-point scale. Conversion of raw scores to overall grades 97 or above:

They explain about the quality of involuntary treatment laws and summarized the results of their analysis of state practice for civil commitment laws and our grades for each. “A detailed breakdown of the scoring for each state, as well as specific findings about the strengths and deficiencies of each state’s laws, may be found within the individual state grade sheets of this report contained in Appendix A. Of the fifty-one jurisdictions (fifty states plus the District of Columbia), ten earned an A (a score of 90 to 100) while eight received failing grades (a score of 0 to 59). Minnesota achieved the highest combined score, with 97 out of 100 points. Maryland received the lowest combined score, with 18 out of 100.”

The Treatment Advocacy Center also compared states to the other states in each category: Emergency (out of 15), Inpatient (out of 35), Assisted Outpatient Treatment (AOT) (out of 50).

In the Statutory Barriers to Treatment, the Treatment Advocacy Center recommends against requiring certification by more than one professional in order to initiate emergency evaluation. “We found that five states – Alabama, Alaska, California, Idaho, and New Jersey – have adopted laws with this onerous requirement, which poses an artificial barrier to treatment.”

California did not fail in every category, but the D- grade indicates there is a lot of room for improvement in the psychiatric care available for California’s mentally ill living on the streets – or lack thereof.

As the California State Auditor reported, her office reviewed a number of other states which have charged a single agency with addressing homelessness statewide and tracking funding information centrally. “These other states have fared better than California in stemming the number of people who experience homelessness.”

Below is California’s report card from the Treatment Advocacy Center. You can read their report here. 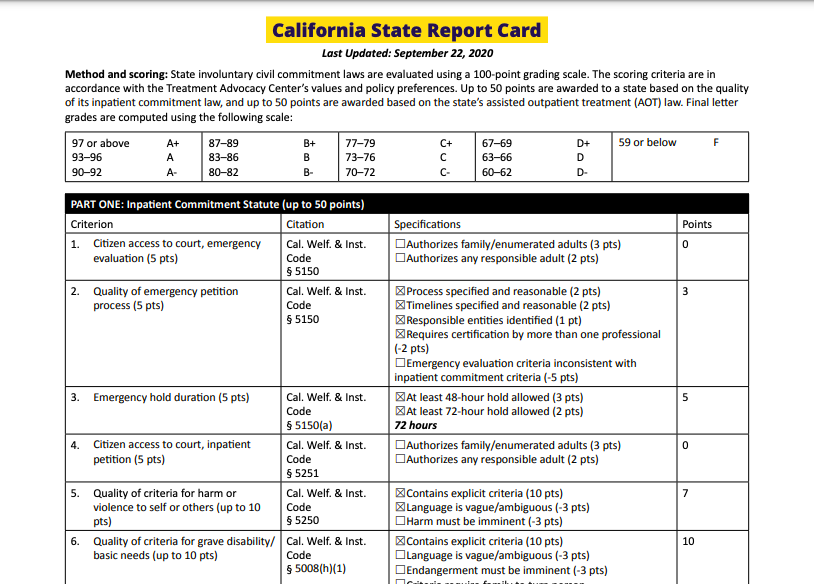 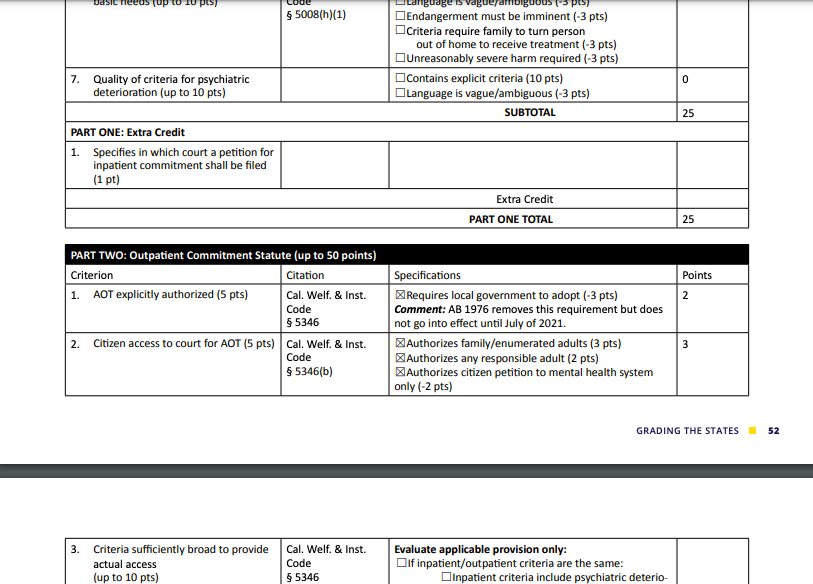 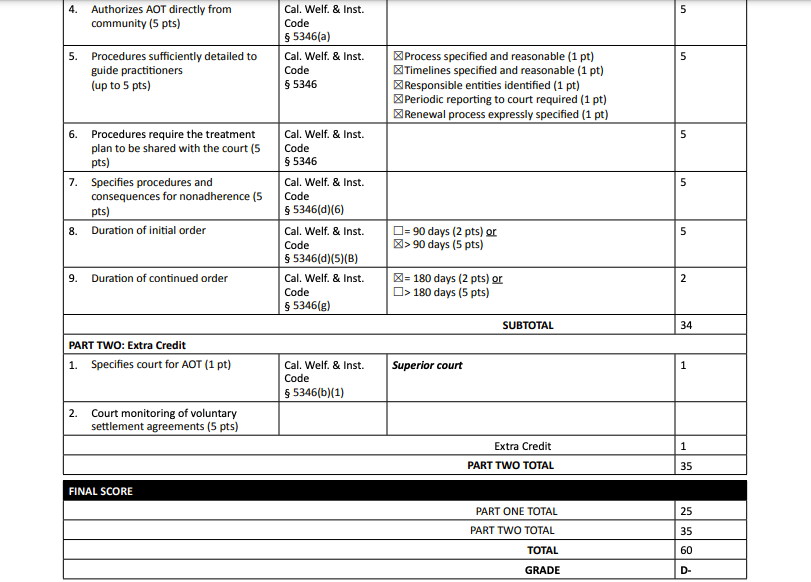