Jackie Lacey is that stronger woman.

It is no wonder that it was Jackie Lacey who was elected the first African American and the first female top prosecutor after 162 years of the existence of the Los Angeles District Attorney’s Office. She is a woman of dignity, fairness and grace who performs her duties with quiet professionalism and a deep sense of personal responsibility.

As female elected District Attorneys, we are a diverse group spanning the state of California: we are mothers, sisters, partners, wives, members of the LGBTQ community, Republicans, Independents, Democrats; we live in rural areas of our state, metropolitan areas, and everywhere in between, and are united in our pride to support Jackie Lacey in her re-election this November.

Understanding who Jackie Lacey is reveals why she is an extraordinary woman, leader and District Attorney.

Jackie Lacey was born to a woman of courage: her mother, Ms. Dunn. Ms. Dunn was one of 14 children, raised in a small town in Georgia. In the early 1950’s, Ms. Dunn regularly witnessed her alcoholic father physically abuse her mother. At 17, she had enough and reported the violence. The police told her parents that Jackie’s mother was “trouble” and needed to be sent away. On their advice, her parents sold the family cow, put Jackie’s mother on a train and sent her to California to live with relatives she barely knew. Ms. Dunn dared to speak the truth and by doing so, she changed the course of history.

For over 34 years, Jackie Lacey has done just that. Like her mother, Jackie faced extraordinary obstacles: racism and inequality, both in her personal and professional life, criticism for following the facts and the law in making decisions, personal attacks and even death threats. Jackie Lacey has never wavered nor stumbled; she always puts her oath before herself.

Jackie joined the LA District Attorney’s Office in 1986. Within two weeks of joining, she knew she had found her calling.  Jackie understood that being a prosecutor was a noble profession which allowed her to represent the wonderful diversity of her community.

As a career prosecutor, she successfully litigated some of the most violent crimes while showing compassion to the most vulnerable of victims and their families: victims of child abuse, sexual abuse and those left behind in murder cases. When asked why she sought out the job of top prosecutor, she simply says, “Victims of crime, of whom 80% are people of color who live in underserved communities, need a prosecutor’s office that cares about them.”

As an African American woman, Jackie has often encountered racism and inequality.  During her college years, when Jackie got an “A” on a paper, a white teaching assistant sarcastically asked, “Whose paper did you copy?”

Soon after becoming the elected District Attorney of the largest prosecution office in the country, she boarded a plane with her security team when a flight attendant looked at her and blandly inquired, “Is she in custody?”

Her passion for the most vulnerable in her community, including people of color, is perhaps best exemplified in her 1998 prosecution of a group of white Skinheads who beat an African American homeless man to death with a tire iron. During that trial, family showed up in support for the defendants; no one showed up for the victim. Jackie Lacey, alone, became his voice for justice.  She had the courage to stand up for someone the rest of the world had forgotten.

Jackie’s passion and persistence for standing up for others did not stop in the courtroom. Her commitment to seeking justice for all and improving the lives of everyone has gained her national respect. One only needs to see her innovative work to understand why Jackie Lacey is nationally known.

She pioneered the Los Angeles Criminal Justice Mental Health Project, establishing alternatives to incarceration for nonviolent offenders with mental illness. Her leadership set the example for counties across this country.

She developed de-escalation training for police officers and dispatchers in dealing with those in mental health crisis. This training gained national recognition.

She established our profession’s Diversity Project, seeking to recruit ethnically and culturally diverse prosecutors into our profession.

She championed efforts to combat human trafficking, establishing a specialized Human Trafficking unit in 2013. As a result, she nearly tripled the number of cases charged against those who sell people, predominantly women and children, for sexual exploitation.

These are just a few examples of Jackie Lacey’s innovative programs.

There is more work to be done in the criminal justice system. Jackie Lacey has the passion, courage, experience and dedication to continue this important work.

Jackie Lacey, like her mother, has faced history and obstacles her entire life. 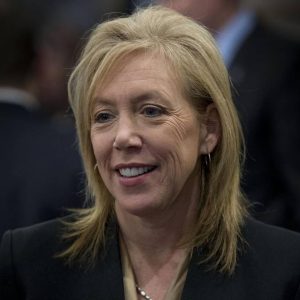 District Attorney Anne Marie Schubert
Sacramento County District Attorney Anne Marie Schubert is a career prosecutor with 30 years of law enforcement experience. As a Sacramento County prosecutor, she spent most of her career prosecuting some of the area’s most notorious and dangerous criminals – murderers, rapists and child molesters. In 2002, she formed the Cold Case Prosecution Unit, and served as its first prosecutor, and is nationally recognized in her knowledge of forensic DNA. District Attorney Schubert led the prosecution and conviction of the notorious Golden State Killer, who raped nearly 50 women and murdered 13 men and women throughout California.