Republican California Congressman Kevin McCarthy  has fired the next volley in the war over the 3.5 billion in federal funds meant for the state’s troubled high speed rail project.

Each representative released a statement supporting the diversion of the funds the US Department of Transportation, through the Federal Railroad Administration, hopes to recover and all expressed the concerns summarized in Rep. Paul Cook’s statement:

“Initially projected to cost $33.6 billion, it has ballooned to more than an estimated $77 billion. In addition, the project has continually failed to meet deadlines and the $10-$12 billion in promised private investment has never materialized.”

The push to recover as much of the $3.5 billion in grants from the California High Speed Rail Authority began when Governor Gavin Newsom seemed to withdraw his support for the project in his February 12th State of the State address, saying, “Let’s be real, the current project as planned would cost too much and, respectfully, take too long. Right now, there simply isn’t a path to get from Sacramento to San Diego, let alone from San Francisco to L.A. I wish there were.”

“California has been forced to cancel the massive bullet train project after having spent and wasted many billions of dollars.They owe the Federal Government three and a half billion dollars. We want that money back now. Whole project is a ‘green’ disaster!” 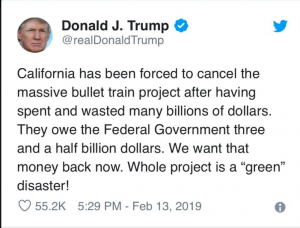 The administration immediately started moving on canceling and recovering all federal funds.

By that afternoon, Newsom was denying he meant the high speed rail project was dead, saying it was only a change of focus. The Governor’s altered plan concentrates on first completing the 171 mile stretch between Merced and Bakersfield line, then reassesses the best way to complete the project when that section is finished.

On February 19, Batory sent a letter to Kelly demanding a return of the funds, making clear they consider Governor Newsom’s proposed changes laid out in the State of the State address and his follow-up statements “a significant retreat from the State’s initial vision and commitment.”

Kelly pushed back, sending two letters on March 4 saying the demand was “unwarranted, unprecedented and harmful to the people and the economy of the Central Valley, California.” He states that the project now has 24 active or completed construction sites with 2.600 employees, and participation of many small businesses at this point and more importantly, California has met all obligations to the federal government as agreed.

Kelly goes on to say Governor Newsom’s apparent change of heart was in fact just a change of strategy to get the project completed in the most practical, efficient manner; due to constrained funds, Newsom’s “building block approach” will mean “maximum independent utility” for the parts of the project that are completed with federal funds, while the state looks for the funds it needs to complete the railway. Kelly says the improved project controls now in place to insure efficiency and accountability were developed with FRA input. He offers to provide details in a May 1st Project Update Report, emphasizing the need for cooperation and continued collaboration between the FRA and the CHSRA to avoid the worst case scenario of an abandoned, useless boondoggle left to rot in California’s Central Valley.

The letter tries to assuage fears the proposed changes will be just another financial black hole for federal funds. “The Governor’s proposal for high speed rail’s early operation in the Valley would be tangible and transformative for Californians,” Kelly writes, “…under our current funding plan, the state, not the federal government, will bear the cost of expansion to downtown Bakersfield and to Merced.”

But Kelly’s 10 page second letter, an expanded, more detailed version of the first, prompted Jeff Davis of the Eno Center for Transportation to speculate that this was “prep work for the inevitable lawsuit” if the Federal Railroad Administration continues its push to rescind the grants. From the correspondence between the agencies, Davis created a list of the five allegations in Batory’s letter and the CHSRA’s response to each.

The US Department of Transportation and the Federal Railroad Administration do not have a formal timeframe to announce their decision.

Latest posts by Laura Hauther (see all)
Spread the news: