Assemblywoman Melissa Melendez is known for being a straight shooter and keeping her word. So when her colleague Assemblyman Chad Mayes lied to her, she let him know her displeasure rather memorably.

Melendez (R-Lake Elsinore) has authored Assembly Bill 359, a bill that extends the length of the “revolving door” ban on lobbying the Legislature from one year to five years, when a lawmaker leaves office. Ahead of the hearing on her bill, Mayes (R-Yucca Valley) assured Melendez that she had his support. Only during the hearing, Mayes not only spoke out in opposition to the bill, he voted against it, killing the bill.

Melendez, who is a big fan of the Los Angeles Clippers, had received a signed Clippers team basketball from Mayes as a gesture of good will following some trying times between them.

But after Mayes went back on his word and spoke out and voted against her bill, Melendez sent a message designed to get his attention: she cut the basketball to pieces, put the pieces in a pink gift bag covered with gift tissue, and had her staff deliver the gift to Mayes along with a note:

“Regrettably, I am returning the basketball you gave to me. It has been shredded and is now completely worthless, just like your word.

I asked Assemblywoman Melendez why Mayes turned on her after promising his support. Apparently Mayes is still bitter over an old dust up. 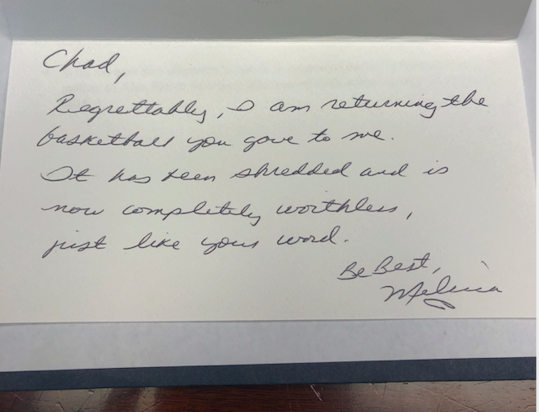 This fight goes back to 2017 when Mayes, then Assembly Minority Leader, led seven Republican Assembly members to vote in support of cap and trade with Democrats, resulting in Melendez resigning as Assistant Republican Leader. The votes allowed California’s cap and trade program to be extended a decade beyond the 2020 expiration date.

Many state Republicans called for the ouster of Mayes as Minority Leader.

Melendez resigned very publicly during a press conference, to which Mayes then removed her from her committee leadership positions, and moved her office to the notorious closet-sized “Dog House” office on the 5th floor of the Capitol.

“He already got his pound of flesh,” Melendez said.

As for Mayes’ devious vote, Melendez added, “You just don’t do that to any of your colleagues. Given that you’re only as good as your word, I’d recommend Republicans and Democrats alike exercise extreme caution when taking Mayes at his word.”

4 thoughts on “Republican Dust Up: Don’t Mess With Melissa”