“Billions of dollars are sent to the State of California for Forest fires that, with proper Forest Management, would never happen,” Trump Tweeted. Trump said the state would not need the emergency funding if there was proper forest management.

“Unless they get their act together, which is unlikely, I have ordered FEMA to send no more money,” Trump Tweeted. “It is a disgraceful situation in lives & money!”

While former California Governor Jerry Brown insisted that climate change and climate change deniers were responsible for the wildfires, this isn’t a new theme for Trump. 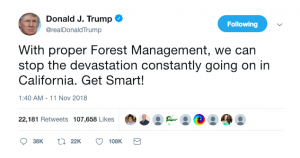 “With proper Forest Management, we can stop the devastation constantly going on in California. Get Smart!” Trump Tweeted in November, just prior to a visit to Paradise, CA to witness the fire devastation.

He also Tweeted: “There is no reason for these massive, deadly and costly forest fires in California except that forest management is so poor. Billions of dollars are given each year, with so many lives lost, all because of gross mismanagement of the forests. Remedy now, or no more Fed payments!”

Average temperatures haven’t changed in 20 years. However, California’s population nearly tripled in the last half of the 20th century, pushing more housing developments in remote locations like Paradise.

“We can all agree that people’s lives and livelihoods are at stake,” Nielsen and Gallagher said. “There is no higher priority. That is why the President’s threat to withhold FEMA funds from California is wholly unacceptable. He made a commitment to the people who have lost everything in these fires, and we expect the federal government to follow through with this promise. So let us work together. California is now investing $1 billion in forestry management, and we need cooperation and funding from the federal government to address the huge buildup of fuels on federal land.”

Assemblyman Gallagher defended the President in October 2017 after Trump was criticized by California media for offering “no more than a few perfunctory words about the Wine Country fires.”

“When California asked for federal aid, the request was fast-tracked by the President,” Gallagher said in a Facebook post. “Vice President Pence even visited the CalOES headquarters to announce the federal disaster declaration. By rapidly responding to the emergency and dispatching VP Pence, the President did right by California. The President’s cooperation is in spite of the fact that state leaders continue to poke him in the eye every chance they get.”