Home>Legislature>Unequal Justice Under the Law in California For the Politically Connected
16 May 2019 2:05 am

A justice system in which income, title or where your parents went to college ensures unfair advantage.

Yet that unfair advantage is exactly what happened when Anthony Rendon, the California State Assembly Speaker (D-Lakewood), one of the most powerful positions in state government, personally handed to then-Governor Jerry Brown an envelope with nearly 200 pages asking that a family member of his be released early from prison.

Chan “John” Lam, Rendon’s brother-in-law, had greater access to clemency because Speaker Rendon had personal access to the governor.

Lam and his friends gunned down 19-year-old Matthew Sievert of Sacramento on Christmas Eve in 2003, because Lam was jealous that Sievert had dated Nicole Carroll, a girl Lam wanted to impress. Matthew Sievert was the only child of Stepheny Milo, a beloved employee in the Assembly Republican Caucus. She has since retired.

If Lam is worthy of clemency, he would be worthy with or without the special oomph added by Speaker Rendon making the request to the governor personally.

In his article on the issue, “A Capitol Crime: How a 16-year-old murder reached California’s highest offices,” CALmatters Senior Editor Dan Morain stated, “Few governors would ignore such a request from a legislative leader.”

Morain said “Rendon’s brother-in-law has been, by all accounts, a model inmate.” If so, that’s a decision of the parole board.

Who among the proletariat is able to personally hand the governor a clemency petition asking that one of our family members, a calculating murderer no less, be released early from prison?

From the CALmatters article:

There should be legislation prohibiting a member of the Legislature from personally intervening in any attempt or petition to the governor to reduce or commute the criminal sentence of a family member. 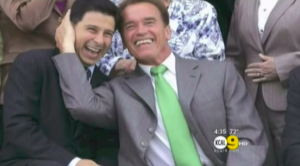 This however, is not a circumstance that arises routinely, but it is the second time the issue has arisen since 2011, when then-Assembly Speaker Fabian Nuñez (D-Los Angeles) got seven years knocked off his son’s criminal sentence for manslaughter by then-Gov. Schwarzenegger.

Fabian Nuñez’s son Esteban Nunez and his friends jumped and stabbed a group of Mesa College students in front of a San Diego State University gym in 2008, after they were turned away from a fraternity party, killing Luis Dos Santos, after a night of heavy drinking. Esteban Nuñez received only a manslaughter sentence in the stabbing death of a 22-year-old college student, however he was sentenced to 16 years. His father claimed his sentence was politically motivated because of his position. Yet while in custody, Esteban Nuñez bragged to police that his well-connected father Fabian Nunez, would get the charges against him dropped. Gov. Arnold Schwarzenegger commuted Esteban Nuñez’s sentence to seven years on his last day in office.

Legislators – Assembly speakers included – should not have any greater access or privilege to justice than do all California citizens. All petitioning for clemency should have equal access and consideration provided, regardless of race, class, wealth or privilege.