As everyone knows, San Francisco and its environs are the center of information technology, currently America’s undisputed fastest-growing economic sector. Transportation is crucial to Silicon Valley, particularly because Millennial employees of tech firms prefer a reverse commute from urban cultural mecca of the city to the tech campuses nestled in the tony suburbs of the Peninsula.

The trouble is, most days you can’t get there from here. Traffic down Interstate 280 and Route 101 are hopelessly snarled much of the day — and it’s constantly getting worse. “Google buses” (other companies do this too) use the same sluggish corridors. An ace mass transit system comprising both a state-of-the-art city subway, light rail and bus system alongside a fast regional rail network is the obvious solution. With billions of dollars sitting idle in the coffers of the tech giants, lack of funds shouldn’t be an issue.

Yet rather than setting the standard for 21st century public infrastructure, the Bay Area is making do with one of the crappiest major-city transit systems in America. Considering how much the U.S. lags countries like China on projects like high-speed rail, that’s saying a lot.

“Built to handle around 100,000 riders in 1972, BART today carries more than 430,000 a day. The result has been a system that’s crumbling – prone to delays, overcrowded cars and messy stations. Some station escalators sit broken for years,” reported The Guardian two years ago. After yet another series of system shutdowns, BART management threw up their hands on Twitter: “BART was built to transport far fewer people, and much of our system has reached the end of its useful life. This is our reality,” the official feed allowed.

I’m from New York, where the slow dispatch of snowplows following a blizzard can create so much public outrage that the crisis can force a mayor out of office. So I have a hard time connecting with the zen attitude of West Coast taxpayers who don’t demand more and better services in return for their payroll deductions.

I stood recently on a packed BART train sitting at an East Bay transfer station. As we idled for 30 minutes without the benefit of a public loudspeaker announcement to explain what was happening and when we might expect to resume our journey, my happy-go-lucky (or, more precisely, happy-not­­­-go-lucky) fellow commuters — whom, I should add, pay the highest fares in the U.S. by far — informed me that this was a routine occurrence. “It’s always like this,” a twentysomething coder told me.

I asked what people did to express their displeasure. They were confused.

“In New York,” I explained, “if things were this bad people would crowd public hearings. They’d write to newspapers. There might even be street protests.”

Still, all hope is not lost. In 2016 voters overwhelmingly approved a $3.5 billion bond measure to finance new cars and system upgrades. Even so, most of the new budget will go to salvaging the existing system rather than for badly-needed expansion to a BART that should travel around the South and East Bay as well as to the Sunset neighborhoods of western San Francisco.

Then there’s the Muni system. Due to ancient equipment and lackluster maintenance Muni buses run an average speed of between eight and nine miles per hour, the slowest in the United States.

For East Coasters accustomed to imperfect yet moving subway systems in cities like New York, Boston and Washington, the sheer scale of Bay Area transit dysfunction can be breathtaking. In 2012 so many people were urinating and defecating on the escalators at BART’s Civic Center station that the mechanism jammed. A hazmat team had to be called to deal with the mess.

Aside from citizens’ lack of civic engagement — no squeaky wheels, no grease — the weird dichotomy represented by a broken-down transit system in the nation’s tech capital can be laid in part at the feet of city and state political leaders. As The San Francisco Examiner reports, “The leading candidates for governor have said little publicly about how they would fix dire problems in the $77-billion [bullet train from San Francisco to Los Angeles] mega-project that has already overrun its initial cost estimate by $44 billion…The forces restraining detailed discussion of the project’s future grow out of many fears: the consequences of betraying [outgoing Governor Jerry] Brown, the scant political payoff in discussing government dysfunction, the possibility that the problems have no legitimate solutions and the potential of alienating the rail system’s supporters.

“They can’t talk about it,” Art Bauer, a retired Senate staffer who was involved in launching the train project, says. “You can’t fix it as it is currently conceptualized. And anything you say could alienate your base.”

Currently the train is only funded to run to the Central Valley.

The elephant in the room, however, is big tech.

Apple alone has a whopping quarter trillion dollars in cash sitting in foreign bank accounts, doing nothing. Google has $64 billion. Setting aside the issue of repatriation — President Trump wants to make it easier for companies to bring their cash reserves back to the U.S. by reducing taxes — companies based in Palo Alto and Mountain View should be forced to cough up money to upgrade transit in San Francisco and throughout the Bay Area, where their employees live. The obvious answer is for Bay Areans to recognize that legacy-based political demarcations make no more sense than programming that relies on Fortran 77.

Currently the Bay Area is divided into counties, cities and other municipalities that allow tech companies to pick and choose locations where they can avoid having to pay the higher corporate taxes they might incur within high-density urban areas like San Francisco. But what if the region banded together within a giant megacounty that imposed taxes equally and doled out money based on proportional representation on a megacounty board? Google could stay down the Peninsula and enjoy the cheaper real estate of their campus while citizens of San Francisco would get some of the fruits of living in an economically vibrant city. 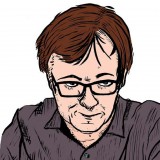 Latest posts by Ted Rall (see all)
Spread the news: