Candace Owens of  Turning Point USA testified before the House Judiciary Committee on Tuesday, seeking to clear up Democrats’ stereotypes of African Americans.

“The media and the journalists on the left are not interested in telling the truth about me,” Owens testified, “because I don’t fit the stereotype of what they like to see in black people. I am a Democrat. I support the President of the United States and I advocate for things that are actually affecting the black community.” 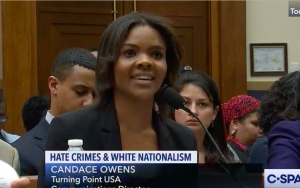 The hearing, Owens said, “is not about white nationalism or hate crimes. It is about fear mongering, power and control. It is a preview of a Democrat 2020 election strategy.” According to Owens, “The biggest scandal in American politics is that Democrats have been conning minorities into the belief that we are perpetual victims, all but ensuring our failure. Racial division and class warfare are central to the Democrat party platform.” Democrats didn’t know what hit them.

California Rep. Ted Lieu (D-33rd District) held up his cell phone as though he was showing a selfie to his friends and played a clip of Owens saying, “You know, he was a national socialist, but if Hitler had just wanted to make Germany great and have things run well, OK, fine.” Then Lieu asked person of no color Eileen Hershenov of the Anti-Defamation League, formerly with the ACLU, whether such attempts to “legitimize” Hitler fed into “white nationalist ideology.” To the surprise of no one, Hershenov said “it does.” Owens, for her part, knew what had hit her.

“I think it’s pretty apparent that Mr. Lieu believes that black people are stupid and will not pursue the full clip in its entirety,” Owens said. The context was a discussion of nationalism versus globalism and Hitler, Owns said, “had dreams outside of Germany. He wanted to globalize.”

For good measure, Owens added that Hitler “was a homicidal, psychopathic maniac that killed his own people,” and Lieu, who tapped his hands silently together as Owens spoke, was “unbelievably dishonest, and he did not allow me to respond to it.” The African American conservative, 29, had a point.

The reductio ad Hitlerum is normally the last resort of someone who has run out of arguments. Lieu deployed it up front, and like the rest of the Democrats on the committee, he knew it was bogus all the way.  It should come as no surprise that Lieu, 50, should smear an African American woman of distinction.

In the California Senate, Lieu targeted the voter-approved 1996 California Civil Rights Initiative, which banned racial and ethnic preferences in state education, employment and contracting. Lieu wants the state to discriminate on the basis of race and ethnicity, and appears to believe African Americans can’t succeed without special help from the government. Candace Owens doesn’t think so. 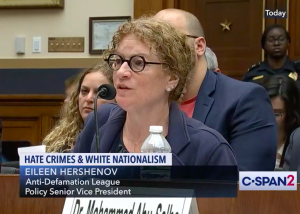 On Tuesday she brought along her 75-year-old grandfather, a man who “has also had experiences with the Democrat terrorist organization of that time, the Ku Klux Klan. They would regularly visit his home and they would shoot bullets into it.”

Her grandfather never once told her “that I could not do something because of my skin color. I was simply never taught to view myself as a victim because of my heritage. I learned about faith in God, family and hard work. Those were the lessons of my childhood.”

Watch the entire hearing on C-SPAN

One thought on “In Lieu of Character”