And she brought forth her firstborn son, and wrapped him in swaddling clothes, and laid him in a manger; because there was no room for them in the inn.
– Luke 2:7

Advocates for the homeless frequently invoke biblical passages in order to appeal to the Christian compassion that still guides the hearts of most Americans, whether they are religious or secular. “No room at the inn,” is a phrase the American Left relies upon for to justify everything from open borders and immigration amnesty to affordable housing and homeless shelters. But what sort of inn? An inexpensive manger that is warm, dry, and safe? Or an overbuilt monstrosity? Both options are warm, dry, and safe, but the monster is so grossly expensive that only a few find shelter.

California’s policies currently favor these overbuilt monstrosities, with the biggest losers the homeless. The average cost for “permanent supportive housing” in California is now easily in excess of a half million dollars per unit. A recent audit in the City of Los Angeles estimated the average cost at $550,000 per unit.

If California Mayors Gavin Newsom, Eric Garcetti, Darrell Steinberg, and all the rest cared about the homeless, they’d build the modern day equivalent of mangers, warm, dry and safe, located in more affordable neighborhoods. They’d defy HUD’s preposterous “Housing First” mandate, rallying compassionate reformers in every Continuum of Care agency in the U.S. to back them up. They would use the money they saved to actually help the homeless in every way – managing their mental illness, treating their addictions, training them for jobs.

That would be compassion worth its name, and worthy of the season.

Prepare to have the property next to you occupied by tenants who pay little or no rent out of their own earnings – if they work at all – because your taxes will be paying their rent for them.

Dubbed by its opponents as “The Monster on the Median,” this building is set to occupy three acres of city owned property located in the heart of Venice Beach. The land is currently used for public beach parking, as well as periodically hosting farmers markets and craft fairs. If these three acres were zoned for mixed use commercial development, they would sell for around $100 million. Any rational policymaker would either leave this property alone, allowing it to remain one of the last scraps of publicly accessible open spaces in Venice Beach, or sell it to a commercial developer.

Instead, what is being proposed is a 140 unit “community project,” a concrete blockhouse with a three acre footprint that will rise over the residential neighborhoods of Venice Beach like the fortress of an occupying army, which is not an entirely inaccurate metaphor. At an estimated construction cost of around $700,000 per unit, and including the value of the land, the total project cost of this monstrosity will exceed $200 million. This is an astonishing, criminal waste of public money. To house every one of the City of Los Angeles’s estimated 60,000 homeless in structures like this monster would cost taxpayers around $100 billion. That will never happen. What’s going on?

It doesn’t require a cynic to recognize that something’s rotten: The incentive to build monsters instead of mangers is because with these monsters, project developers and financiers have a larger monetary denominator to work with. Much larger. That’s more budget to accommodate overhead, fat consultancy contracts, huge payoffs to litigators, hefty payments to the public sector for permits and fees, lucrative deals with subcontractors, and the promise of endless additional work since at this rate, and at this cost, the problem will never get solved. But how is this ever justified morally?

Here’s where one of the more insidious manifestations of socialist ideology comes into play. Like all socialist principles, it reeks with compassion but is utterly impractical if not nihilistic in the real world. Building homeless housing and low income housing on some of the most expensive real estate on earth is to fulfill the ideals of “inclusionary zoning.” Relying on “scientific studies” that defy common sense, the role of inclusionary zoning is to “encourage the development of affordable housing in low poverty neighborhoods, thereby helping foster greater social and economic mobility and integration.”

In practice, this means if you work hard your entire life to live in a neighborhood where your children can go to decent schools and feel safe walking the streets, if you skip vacations and take on a 2nd job to pay off an astronomical mortgage, it does not matter. If you lose the inclusionary zoning lottery, prepare to have an apartment house dumped onto the lot where your neighbor’s single family home just got demolished. Then, while investors pad their profits with property tax exemptions for creating “inclusionary” housing, prepare to have this property occupied by tenants who pay little or no rent out of their own earnings – if they work at all – because your taxes will be paying their rent for them. Prepare for them to openly consume drugs and watch your belongings since petty theft and heroin use is now decriminalized in California.

That is what happened to Venice Beach. And it’s coming to your neighborhood.

The obligations of compassion don’t end when the Homeless Industrial Complex is finally forced to build inexpensive mangers instead of overwrought monsters.

What if baby Jesus was born in a barn filled with addicts injecting heroin and smoking methamphetamine? What if the three wise men didn’t have to bring gifts, because gangs of thieves had set up lucrative criminal enterprises to pay for their drugs, and instead of the hospitality of the innkeeper providing food, King Herod dispensed free government meals?

Compassionate Christians who reelect these corrupt politicians should imagine that scene defining their next Christmas pageant. And while this all sounds horribly cruel during the holiday season of giving, true cruelty is to accept the solutions currently being pursued. They are wasting billions while suffering only increases.

These are the tragic consequences of a perfect storm of flawed legislation and court rulings. In California, the practical effect of Prop. 47, sold to voters in 2014 as criminal justice reform, has been to decriminalize possession of hard drugs and petty theft. At the same time, court rulings such as Jones vs. City of Los Angeles prohibit law enforcement from relocating or detaining anyone camping in a public space unless they can offer them “permanent supportive housing.” The final straw is the “housing first” regulations originating at HUD during the Obama administration that require virtually all federal grant money get spent on housing, rather than also on parallel treatment for substance abuse and mental health.

Tolerate vagrancy, drug use and petty crime. Permit an alliance of developers, service nonprofits, and government bureaucrats to hijack and waste every dollar taken from taxpayers to help the homeless, abetted by useful idiots who believe this impossible, toxic intersection of futile, corrupt strategies somehow constitutes “compassion.” The result? Billions have been spent, additional billions will be spent, and the population of homeless in California, already numbering over 130,000, will only get bigger and more unmanageable.

This is the fraud presided over by supposedly compassionate politicians such as California governor Gavin Newsom and Los Angeles Mayor Eric Garcetti. Hiding behind supposedly compassionate principles such as “inclusionary zoning” they are spending billions of dollars to construct monstrous housing boondoggles where homeless people will be given “permanent supportive housing” in order to “integrate with the community.” At the same time, California’s unsheltered homeless, the majority of whom are either mentally ill, substance abusers, criminal predators, or all three, shall be subject to minimal expectations.

Perhaps it’s time for the Homeless Industrial Complex bureaucrats to construct one of these housing monsters on the park property immediately adjacent to Gavin Newsom’s gubernatorial mansion. Isn’t that sort of “integration” the logical endpoint of “inclusionary zoning?” Perhaps these monstrosities should follow Gavin Newsom, and every other wealthy liberal who pushes these scams – and they are scams, designed to enrich the Homeless Industrial Complex, not to help the less fortunate – to the streets where they live and the schools where their children learn.

Instead of into the neighborhoods of hard working families, let California’s completely unaccountable homeless come en masse to the exclusive, “low poverty” enclaves of the liberal elites who engineered this crisis. Let them come, with all the lawless behaviors that California’s liberal laws enable. Let them urinate in your hedges, defecate on your lawn, shoot heroin and smoke methamphetamine in plain sight, beg, bellow, fight, rape, mug, murder, and, of course, steal everything that isn’t nailed down or under armed guard.

This is exactly what happened to Venice Beach. Fact. Where’s the difference?

And yes, we know, some of the homeless just need a helping hand. So how does it help the virtuous homeless when we fail to police the predators among them?

Isn’t it funny how politicians like Gavin Newsom are willing to impoverish the taxpayers with tens of billions in housing bonds that have not even begun to solve the problem, and leave unchallenged laws and court rulings that turn their state into a magnet for lunatics, addicts, predators, perverts and bums, and destroy neighborhoods across the state with “inclusionary zoning,” but make sure to leave their own streets and schools untouched by this growing nightmare. 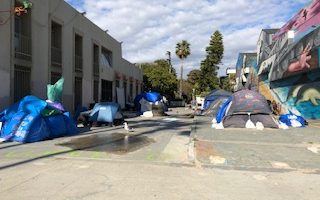 How the Homeless Industrial Complex Plans to Destroy Venice Beach 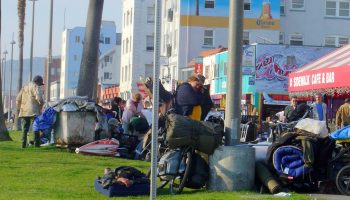 While Venice Beach Residents Under Lockdown, Homeless and Encampments Grow and Thrive 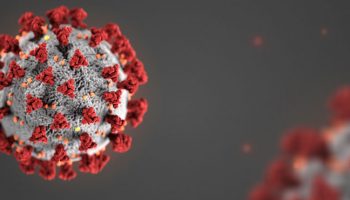 4 thoughts on “The Manger vs. The Monster: Housing the Homeless”