Home>Articles>California’s General Fund Relies on the Super Rich and Federal Bailouts
13 Jan 2021 2:15 am

One of the biggest reasons California’s technology moguls supported the Biden/Harris candidacy had nothing to do with ideology. It had to do with their pocketbooks. Because with a Californian presiding over the Senate, and a Californian Speaker of the House, expect federal bailouts to flow west by the hundreds of billions.

The likelihood of federal money to prop up failing local governments, state agencies, and public employee pension funds has just gone from remote to probable, as Democrats take control of all three branches of the federal government later this month. Simultaneously, and as a result of this political outcome, the likelihood of massive new state taxes here in California targeting the super rich drops from probable to too-close-to-call.

Consider the impact of Assembly Bill 2088, if enacted, on California’s wealthiest households. This “wealth tax” will impose, year after year, an annual tax at a rate of 0.4 percent of any California resident’s worldwide net worth in excess of $30 million.

To use the example of California’s richest man, Elon Musk, who according to Forbes had a net worth in early January of $176 billion, AB 2088 would require Musk to pony up 704 million, every year, for the privilege of living in California. Mark Zuckerberg, with a current estimated net worth of $92 billion, would have to pay the state $368 million. Every year.

It is easy enough to understand the emotional indifference that a libertarian might display towards Musk getting soaked for $704 million per year, or that a conservative might display towards Zuckerberg having to turn over $368 million per year, or that liberals arguably feel towards anyone wealthy being forced to pay their “fair share.” But California’s rich already pay a huge share of California’s total state tax revenues.

For example, the Governor’s Budget for 2019-2020 projected 69 percent of all general fund revenue to come from personal income taxes. Another 20 percent came from sales taxes and 9 percent from corporation taxes. The other 3 percent came from a variety of sources, mostly insurance tax. While property tax is a significant source of revenue, it is a local revenue source and only impacts the state budget insofar as when property taxes go up, it relieves pressure on the state to allocate more out of the general fund to support local schools and other local agencies.

Bearing in mind that nearly seven out of every ten dollars going into California’s general fund comes from personal income taxes, the following chart shows who is paying those taxes. Using Franchise Tax Board data from 2018, and sorted by the reported taxable income of the 16.8 million Californians filing returns, it is immediately apparent that nearly everyone paying taxes made under $100,000. That is, 13.2 million Californians, or 78 percent of the people filing state income tax returns, contributed only $7.8 billion or 9 percent of the total personal income taxes collected. 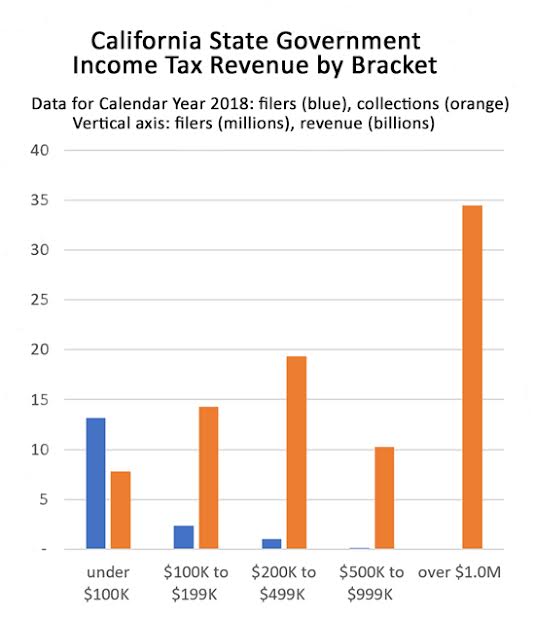 On the other side of this chart, to the right, the flip side of this top-heavy equation is presented. There were 89,000 Californians in 2018 that reported taxable income of over $1.0 million. At one-half of one percent of the total filers, their numbers don’t even register on the chart. But the orange column, representing the $34.5 billion they paid in taxes, dwarfs the contributions from the other brackets. One-half of one percent of California’s taxpayers paid 40 percent of all personal income taxes.

Moving one notch to the left to incorporate the filers who reported taxable income in excess of $500,000 in 2018 yields further evidence of just how top-heavy California’s reliance is on the wealthy to fund state government operations: Only 275,000 individuals, representing 1.6 percent of tax filers, paid 56 percent of all personal income tax revenue, which in turn is 40 percent of ALL general fund revenue in the State of California.

It is easy enough to scoff at the prospect of extremely wealthy people having to pay more. But one way or another, California’s state government needs more money. Governor Newsom’s proposed 2021-2022 state budget proposes record spending. He does this in the face of structural deficits that existed before COVID-19 trashed California’s economy. The pandemic drove the global economy online, disproportionately helping California’s tech industry, but how much higher can tech stocks soar, and how much more will the tech billionaires pay?

Of the two bills, AB 1253 is more likely, since it would not require the gyrations that a precedent setting wealth tax would require. But would California’s wealthy residents leave the state? The litany of reasons California is driving away residents and businesses is long and compelling, with high taxes having an impact along with exhausting, endless regulations, a punitive cost-of-living, and a passive-aggressive bureaucracy.

Back in the 1950s and 1960s, Californians paid relatively high taxes (for the time), but got plenty for their money. Californians saw their taxes used to build a massive, statewide system of water storage and distribution, beautiful freeways to tie together the growing cities, and the finest public university in the world.

Today Californians live in a state of 40 million people with an infrastructure designed for 20 million people. New infrastructure projects are rarely approved, and when they are, more money is spent on litigation and bureaucracy than on actual construction. Thanks to preposterously overwritten regulations, California’s homebuilders cannot profitably build affordable homes without collecting government subsidies. California’s timber industry could thin the forests and would pay taxes on their earnings, but because they have been regulated nearly into oblivion, California’s forests burn like hell, year after year. One could go on.

Perhaps California’s weather and scenery will keep the super rich around. Perhaps California’s generous social benefits and decriminalization of petty theft and public intoxication will guarantee a growing population of indigent. But the middle class and the small businesses are leaving. That’s a problem for everyone, including those who can afford to stay.

While the wealthy contribute 40 percent of all tax revenues to the state’s general fund, it is the middle class and small businesses that pay most of the other 60 percent.

With every moving van that heads east, more of that burden transfers to the wealthy. They had better hope their gambit has paid off, and their new friends in Washington DC are generous indeed.