Frontline doctors from across the U.S. held a “White Coat Summit” on Monday in Washington D.C. to expose and counter the “massive disinformation campaign” surrounding the Coronavirus.

California Globe watched the entire video Monday before Facebook, Google/ Youtube, and Twitter pulled the video conference from all social media platforms, clearly in support of the fraud being perpetrated on the American people. 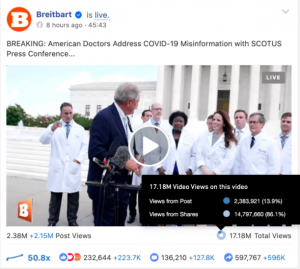 Breitbart had the video posted on its website and on Facebook page for eight hours. “The video accumulated over 17 million views during the eight hours it was hosted on Facebook, with over 185,000 concurrent viewers,” Breitbart reported.

The event, hosted by the organization America’s Frontline Doctors, a group founded by Dr. Simone Gold, who is a board-certified physician and attorney. Gold said counting “cases” of coronavirus was useless and a political distraction, and only hospitalizations and deaths matter.

California Globe has reported how every day California Gov. Gavin Newsom only talks about how many “cases” and “infections” are in the state as justification for keeping the state in lockdown and businesses closed, rather than how many test negative or have recovered.

The doctors all spoke highly about Hydroxychloroquine, a malaria drug which has been available for 65 years.

Dr. Stella Immanuel said she has treated 350 patients with Hydroxychloroquine, Zinc, and Zithromax, and all of her patients survived Coronavirus. She accused the NIH and CDC of stalling, and added, “You want a double blinded study where people are dying? It’s unethical.”

Immanuel said as a preventive measure, she put herself and her staff on Hydroxychloroquine, and none of them have contracted the virus, despite the exposure to infected patients.

Dr. Gold said the treatment for coronavirus is easy: take Hydroxychloroquine twice in one week, and Zinc daily. Gold lamented the fact that politicians have turned the treatment into a political football, and said that 100,000 Americans could have been saved if politicians had not politicized the simple cure.

Dr. Immanuel challenged Dr. Anthony Fauci’s expertise, and said she wanted to know the last time he had a stethoscope around his neck treating actual patients. She stressed that each of the doctors at the press conference were practicing physicians and know first-hand that Hydroxychloroquine and Zinc works.

Immanuel also said too many states have empowered pharmacists to override doctors’ prescriptions for Hydroxychloroquine. She added that she’s never politicians interfere in medical practices the way they are with coronavirus.

Pediatrician, Dr. Robert C. Hamilton, M.D. who has practiced in Santa Monica, CA for 36 years, addressed bigger concerns of depression and suicide in young people. He said kids are not giving the virus to adults, then asked what kids in middle school do – “They go to parties, clubs, and sports,” he said. He explained keeping kids at home away from their friends and socialization is devastating and causing extreme levels of depression and suicide in far too many, and schools need to be re-opened.

Dr. James Todaro also spoke out at the press conference. Todaro wrote the first widely read paper on chloroquine in treatment of COVID-19 in An Effective Treatment for Coronavirus (COVID-19), and most recently the first detailed exposé on Surgisphere in A Study Out of Thin Air. His early discovery of the fraudulent data investigation led to what is now referred to as #LancetGate – the stunning once-in-a-generation retraction of the now infamous The Lancet study that had led to the European Union and the WHO halting studies of Hydroxychloroquine, his bio explains.

Doctors said this is a moral issue, and politicians must get out of the way so lives can be saved, and America can reopen.

“American life has fallen casualty to a massive disinformation campaign. We can speculate on how this has happened, and why it has continued, but the purpose of the inaugural White Coat Summit is to empower Americans to stop living in fear,” America’s Frontline Doctors says on its website.

“If Americans continue to let so-called experts and media personalities make their decisions, the great American experiment of a Constitutional Republic with Representative Democracy, will cease.”

The Globe will continue to post websites hosting the video. Try HERE at BitCHUTE.