Pensions for state and local government employees in California are literally three to five times as costly as Social Security, and at least twice as costly as the Federal Retirement System.

In a perfect world, California’s state and local public employees would receive exactly the same retirement benefits as federal employees. They would receive a modest defined benefit, a contributory 401K, and they would participate in Social Security.

In reality, however, twice the cost would be a bargain. It’s much worse than that, and very little has been done. In 2013, the PEPRA (Public Employee Pension Reform Act) legislation lowered pension benefit formulas in an attempt to restore financial sustainability to California’s public employee pensions. But these revisions, which resulted in defined benefit formulas only about twice as generous as the federal formulas, only applied to new employees.

California’s Pension Systems Were Crashing Before the Coronapocalypse

Two years ago, and after more than eight years of a bull market in the stock market indexes, CalPERS, which is by far the largest pension system in California, had already announced that contributions from participating agencies were going to roughly double. They posted “Public Agency Actuarial Valuation Reports” that disclosed the details per agency.

At the time, in partnership with researchers at the Reason Foundation, the California Policy Center used these reports from CalPERS to summarize the impact on 427 cities and 36 counties (download full spreadsheet). As shown on the table below, two sets of numbers are presented – payments to CalPERS for the 2017-2018 fiscal year, and officially estimated payments to CalPERS in the 2024-25 fiscal year. 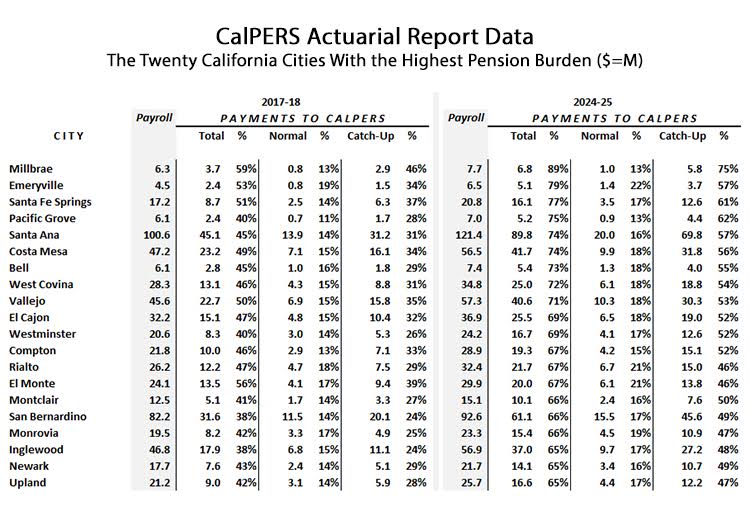 The most important distinction one should make when reviewing the above data is the difference between the “normal” and the “catch-up” payments. The so-called “normal contribution” is the amount the employer has to contribute each year to maintain an already fully funded pension system. The “catch-up” or “unfunded contribution” is the additional amount necessary to pay down the unfunded liability of an underfunded pension system.

As can be seen in the example of Millbrae (top row, right), by 2024, the “catch-up” contribution will be nearly six times the amount of the normal contribution. But in the PEPRA reforms, new employees are only required to contribute via payroll withholding to 50 percent of the “normal” contribution.

A separate California Policy Center analysis, also published two years ago, attempted to estimate how much total payments statewide would increase if all of the major pension systems serving California’s state and local public employees were to require similar levels of payment increases. The analysis extrapolated from the consolidated CalPERS projections for their participating cities and counties and estimated that in sum, California’s state and local government employers would have paid $31 billion into the 87 various pension systems in 2018, and by 2024 this payment would rise to $59.1 billion.

As noted at the time, and now more than ever, this was a best case scenario.

A Financial Snapshot of CalPERS Today

The next chart, below, depicts financial highlights for CalPERS – either officially reported or projected – in a format which ought to be publicly disclosed, every quarter, in this format, from every state and local public pension system in California. The first two columns depict data as reported by CalPERS for their most recent two fiscal years, ended 6/30/2018 and 6/30/2019. The final column, which consists of CPC estimates (not provided by CalPERS), shows how their financial condition could appear three months from now. 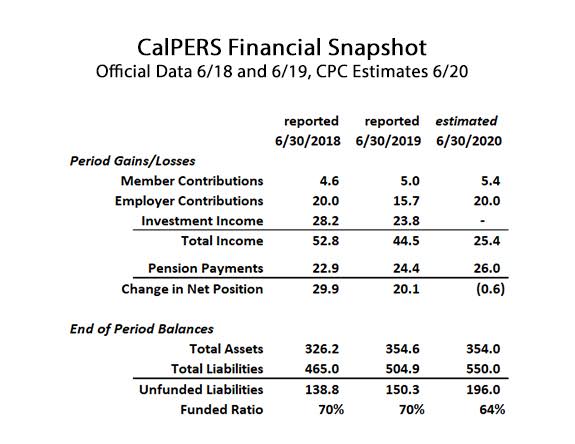 The first thing to note from the above chart is the fact that CalPERS was only 70 percent funded (“funded ratio,” bottom line) in June of 2019. The next thing to note, and this is crucial, is that the actuarial estimates of the total pension liability lags behind one year. That is, the $504.9 billion reported “actuarial accrued liability” is reported as of 6/30/2018, even though that figure is used to report the funded ratio as of 6/30/2019.

There’s more. Why are actuaries permitted to have an entire extra year to complete their estimate of the total pension system liability, when changing single variables will cause the estimate to massively fluctuate? Sure, it is a complex exercise, and at some point an official calculation, based on all known data, should be reported that amends a preliminary estimate. But if, for example, you vary the earnings projection downwards from 7.0 percent to 6.0 percent – which needs to be done sooner not later – using calculations provided by Moody’s Investor Services, the amount of the CalPERS liability soars from $550 billion to $621 billion. You don’t split hairs when you’re being scalped.

Where does this put CalPERS?

All of this discussion is to explain the reasoning behind the figures in column three on the above chart. What might be materially different? What estimate isn’t best case? Does anyone believe CalPERS will actually break even in the return on their invested assets between 6/30/2019 and 6/30/2020? Does anyone believe the most accurate estimate of the total liability belongs anywhere south of $550 billion, particularly when they’re still using a discount rate that’s too high? And yet this puts CalPERS in what is arguably the worst shape it’s ever been, at 64 percent funded as of this June.

This paints a very grim big picture. CalPERS is on track to collect over $20 billion from taxpayers in the current fiscal year, and CalPERS, while the biggest pension system, only manages just over 40 percent of the state and local government pension assets in California. This suggests that the total taxpayer contribution to California’s state and local government pension systems in 2020 is already up to around $50 billion. And it isn’t nearly enough.

Steps to Reform CalPERS and all of California’s pension systems

1 – Admit the long-term rate of return projection is too high for calculating the value of pension liabilities. Move it down to 6 percent. Increase the required “normal contribution” accordingly, and, in turn, increase the share required from active employees via withholding.

2 – Once a more reasonable long term rate of return projection is adopted by the pensions systems, the goal of pension reform should be to stabilize pension system payments at some maximum percent of total personnel costs. With cooperation from union leadership, agree on what that maximum percent should be, then determine how to spread benefit reductions in an equitable manner between new hires, current employees, and retirees.

3 – For all state and local government employee pension plans in California, start providing consolidated quarterly financial summaries (without gimmicks), using the above chart as an example. Include a footnote indicating how much of the total employer contribution is for the unfunded liability vs the normal contribution.

6 – With or without a decisive ruling (or any ruling) on the California Rule, work with government union leadership to revise pension benefits. If union leadership is uncooperative and the courts fail to offer an enabling ruling, than as a last resort, to bring the unions back to the negotiating table, lower salaries, current benefits, and OPEB benefits.

7 – In the long run, move towards a system modeled after the federal system. This would be a logical next step, following in the footsteps of PEPRA. It would create three basic tiers of public sector workers in California, the pre-PEPRA workers (who may submit to lower benefit accruals for future work), the post-2013 hires who are subject to the PEPRA reforms, and new hires starting in, for example, 2021, who would enjoy retirement benefits similar to what Federal employees receive.

The Ripple Effect of Unreformed Pensions

There are two problems with a bullish outlook today. First of all, the great returns of the past few years may have been unsustainable, a super bubble. And then that super bubble was not popped by a pin, but rather by a wreaking ball, the Coronapocalypse. There are tough economic times ahead.

In a severe downturn it is conceivable that annual taxpayer contributions to California’s public employee pensions systems will not merely soar from around $50 billion in 2020 to $60 or $70 billion within a few years. They could go even higher. For example, over the total three year period through June 2020, it is quite possible that CalPERS will collect more from taxpayers – $65 billion – than it will have earned in investment returns – $52 billion.

This is the new reality of public sector pensions in California. And because taxpayers have been increasingly on the hook to bailout these pensions, taxes have increased, services have been cut, and there has been a gradual wearing away of trust by citizens in their local governments. This is why, for the first time in decades, more local taxes and bonds were rejected by voters in March 2020 than were approved. Absent pension reform, this backlash has just begun.

So-called “crowding out” of other public services in order to pay for pensions doesn’t just impel an insatiable drive for higher taxes. It also works its way into higher fees, building fees in particular. Infrastructure investments such as connector roads and parks for new housing subdivisions used to come largely out of municipal operating budgets. It was a fair trade – the city builds the roads, the builders sell the homes, and the new residents pay taxes. But now, all of those costs are paid for by the builders and passed on to the home buyers. The rising cost of pensions can be directly tied to the unaffordable cost of homes.

Pensions for state and local government employees in California are literally three to five times as costly as Social Security, and at least twice as costly as the Federal Retirement System. Ultimately, this disparity divides Americans and undermines what it means to be an American citizen. Why should public employees care if Social Security is inadequate, if they don’t depend on it? Why should they care if all public benefits offered private taxpayers is diluted, or if citizenship itself becomes less meaningful, if their membership within the public sector is the primary source of their security?

America is entering difficult economic times. Maybe one good thing to come out of this will be a willingness on the part of public sector union leadership to make common cause with all of California’s workers, and agree to reasonable concessions on pensions that will help everyone living in this great state.