Why the capitalists of Silicon Valley and San Francisco support a Democrat Party suffused with such sentiments as Gonzalez’ remains a mystery.

California Republicans should send beautiful thank you cards to Assemblywoman Lorena Gonzalez, D-San Diego. In recent years, Republicans have been so depressed local pharmacies have run out of valium. But she single-handedly has given them a cause to fight for – and win.

I’m sure you’ve heard of her tweet-epithet when Elon Musk said he was going to move Tesla to Texas: “&$@# Elon Musk!”

She was seconded in more elegant fashion by Democrat-boosting Los Angeles Times columnist Michael Hiltzik: “Has Elon Musk worn out his welcome in California at last?”

But every Democrat executive in Silicon Valley and San Francisco must have thought he could be the next target of a profane screech from Gonzalez. After all, she’s also the author of Assembly Bill 5, which with the stroke of Gov. Gavin Newsom’s pen wiped out a large swathe of the new freelance economy.

Uber and Lyft have been hit so hard they’re investing $90 million in a repeal initiative on the November ballot. Do you think at least some of the millionaires in their ranks are wondering if it made sense to subsidize Democrat candidates in the Legislature, giving the Donkey Party a supermajority?

Maybe keeping some pro-business Republicans around the Capitol in Sacramento might now make a little sense in their political algorithms?

San Francisco hosts those two “gig economy” companies, along with Twitter and many others. Yet the city’s politics are to the Left of Pyongyang. Republican elected officials are as scarce as Prohibition Party members in a Jack Daniels distillery.

The message Republicans should spread to the tech billionaires is: If you want more Lorena Gonzalez types, then please keep subsidizing her and her party. If not, then it’s time to restore the two-party system and support some California Republicans.

In explaining her gutter language, Gonzalez tweeted, “California has highly subsidized a company that has always disregarded worker safety & well-being, has engaged in union busting & bullies public servants. I probably could’ve expressed my frustration in a less aggressive way. Of course, no one would’ve cared if I tweeted that.”

Well, what major company in America doesn’t get subsidies of one sort or another, especially now as we begin to recover from the plague? And is she sponsoring legislation to end such subsidies?

Her rhetoric, though, is straight out of 1930s Wobblies, such as: “The working class and the employing class have nothing in common.”

AB 5 is especially absurd as we recover from the coronavirus. The rebuilt economy taking shape is based on freelancers working from home. Twitter CEO Jack Dorsey just said his employees could work from home “forever.” Alas, he’s a Democrat who “fully” admits his company is “more left-leaning.”

Well, Jack, what ya gonna do when Lorena Gonzalez comes for you?

Why the capitalists of Silicon Valley and San Francisco support a Democrat Party suffused with such sentiments as Gonzalez’ remains a mystery. Perhaps it was all that Marxism imbibed in politically correct colleges.

Of course, the Marxist sentimentalism doesn’t interfere with the execs grabbing what profits they can to the tune of billions. But a residual mentality of leftism keeps them supporting Democrats of Lorena’s ilk.

Musk likely will stay, as local officials now seem to be accommodating him. But Joseph Vranich for decades has catalogued 17,000 companies, big and small, that have skedaddled to Texas, Tennessee, Florida, Arizona and other states more attuned to Groucho Marx than Karl.

Vranich just listed some exits in the past year: “The brand names include McKesson embarking on a San Francisco-to-Irving, Texas move (that’s 500 well-paying jobs); Callaway Golf from San Diego to Salt Lake City; Mitsubishi Motors from Orange County to Franklin, Tennessee; Made in Space from Santa Clara to Jacksonville, Florida; and XoJet Aviation fleeing Sacramento for Fort Lauderdale, Florida.”

So this is a rare opportunity for Republicans to revive their party. Their message should be simple: Tech executives can continue their business suicide pact with the Democrat Party.

Or they can support a resurgent Republican Party eager to cut taxes and regulations, reform state finances and restore California as the best place to make a profit. Another boost came Tuesday from Mike Garcia flipping a House seat to the GOP, the first time that has happened in the Golden State since 1998. The Republican Revolution is beginning.

As the late Steve Jobs would say, just one more thing: Thank you, Lorena Gonzalez. 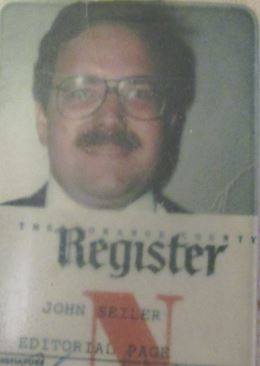 Latest posts by John Seiler (see all)
Spread the news: