Home>Articles>The Sustainable Alternative to Renewables in California
16 Nov 2022 2:50 am

Anyone serious about ushering California into an electric age, much less the entire world, faces immutable facts that are indifferent to passions and principles. With algebraic certainty, these facts lead to uncomfortable conclusions: It is impractical if not impossible to achieve an all-electric future by relying on solar, wind, and geothermal power, supplemented by more novel power generation technologies such as harvesting the energy in waves and tides. And even if it were done, it might not be the optimal solution for the environment.

A few years ago, professor of civil and environmental engineering at Stanford University, Mark Jacobson, completed a report that quantified what it would take, in terms of the installed base of renewable generating and storage assets to move California to a 100 percent net zero energy economy. Relying primarily on over 20,000 wind turbines with an average capacity of 5 megawatts each, along with utility scale solar farms, an analysis published in March 2022 by the California Policy Center estimated the land requirement for this undertaking at over 10,000 square miles on land, mostly for wind farms, and over 15,000 square miles offshore, also for wind farms.

In theory, Jacobson’s recommendations would work, insofar as this stupefying quantity of wind and solar power, properly buffered with battery storage assets, would nearly double the capacity of California’s energy grid. Jacobson’s scheme estimates California’s average electricity output expanding to just over 100 gigawatts. In 2019, the most recent year for which complete data is available, California’s electricity grid produced, on average, 54 gigawatts.

To understand why a credible best case scenario would only require Californians to double their electricity output in order to go all electric, the following chart, prepared by Lawrence Livermore Laboratory, can be helpful. 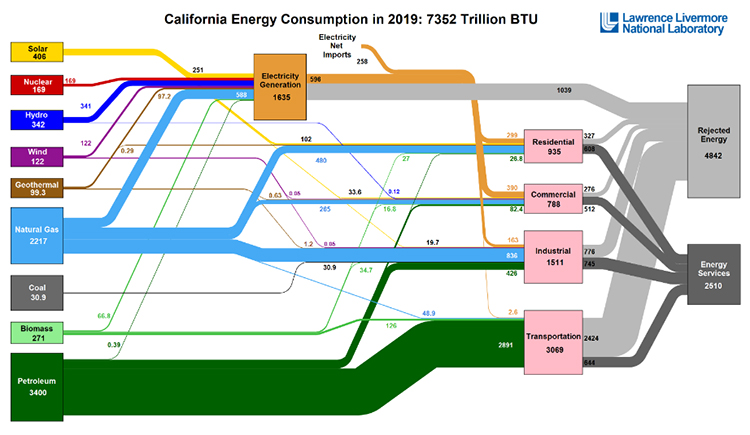 A detailed review of the data on this chart can be found in a July 2022 California Policy Center analysis, but for the moment, three critical variables are explanatory. California’s total energy consumption of 7,352 trillion BTUs, the “rejected energy” of 4,842 TBTUs, and the “energy services” of 2,510 TBTUs. What this describes is the overall efficiency of energy use in California. Of the energy Californians consume to power their residential, commercial, industrial and transportation sectors, 34 percent actually performs a service – heating, cooling, illumination, pumping, traction, etc. – and 66 percent (the “rejected energy”) is lost through friction, heat, wasted motion, leakage, etc.

The promise of electricity is that it can stand this ratio on its head. The appeal of electric power lies in its efficiency in conversion. Electric transmission losses are about 5 percent, with another 10 percent lost in a modern onboard battery’s charge/discharge cycle and the electric motor’s conversion of electrons into traction. Compare the electric car’s overall 85 percent efficiency to a gasoline powered automobile, which at best can achieve efficiencies of 35 percent.

The 2,510 TBTUs of energy Californians consumed in 2019 equate to 735 terawatt-hours, which in turn equates to an average output on the electricity grid of 84 gigawatts. This means that if every energy service in California were using electricity at 85 percent efficiency, a grid capacity of 100 gigawatts would be sufficient to power all of it. That’s a stretch, but it’s in the ballpark. It would require extraordinary engineering achievements as well as aggressive energy conservation programs. It is therefore the absolute minimum amount of electricity required for California to go 100 percent electric.

Disrupting the dream of accomplishing this goal while relying almost exclusively on wind and solar energy, however, are cold facts: Renewables aren’t renewable, and they aren’t sustainable. The footprint of wind and solar facilities on land and ocean, the battery farms to buffer their intermittency, the raw materials necessary to build them all, the maintenance, replacement, and recycling costs, are far in excess of anything Californians should have to endure, and far in excess of what the world’s resources have to give.

The alternative to massively subsidized wind, solar and battery farms that despoil literally thousands of square miles of land and ocean is far more practical. Develop energy generation capacity using proven technologies, and further improve them. Californians should be pioneering the installation of the most advanced combine cycle natural gas generating plants and nuclear power plants. Instead of mandating all-electric cars, we should permit within the new mandates hybrid cars that retain range-extending advanced internal combustion engines. We should be allocating billions to upgrade our existing and proposed reservoirs to incorporate pump storage, which is still the most cost-effective way to store large amounts of renewable electricity.

This all-of-the-above approach to energy, on the surface, seems to be moving slightly away from climate purity. But a cradle-to-grave assessment of renewables may belie that first impression. Moreover, if California is serious about setting an example for the world, which after all will yield far more planetary benefits than going it alone, we must develop energy technologies that are practical.

There is enough wealth, and enough political will, for Californians to actually inflict upon themselves an all-electric future that rejects natural gas and nuclear power, rejects pump storage, and rejects advanced hybrid vehicles. But where the climate purists and their special interest puppeteers see a grand vision, history may only recognize hubris and corruption. Californians must put their impressive wealth and willpower into researching breakthrough technologies, while remaining practical in the meantime. That is how California can more effectively demonstrate effective leadership, and set an example for the world to follow.

8 thoughts on “The Sustainable Alternative to Renewables in California”