Home>Legislature>California Fur Ban: Assemblywoman Friedman Calls it a ‘Statement of Wealth and Fashion’
27 Mar 2019 2:05 am

Hawaii may be the first state to ban fur products. While this may seem laughable given the balmy tropical climate, a California lawmaker is also trying to ban fur products and clothing, ahead of the Hawaii ban, despite the many diverse climates within the 164,000 square miles of California. San Diego to Siskiyou, Death Valley to Bodie State Park (near Bridgeport, Mono County), temperatures range from 110 degrees to -5 degrees, where people wear fur for warmth.

Assemblywoman Laura Friedman (D-Glendale) is the author of AB 44, which would prohibit the sale and manufacture of new fur in California. From her home in Glendale, California, Friedman wants California to lead the nation in statewide fur bans. “Today there are a variety of humane alternatives, both in terms of faux fur that is virtually indistinguishable from real fur, and alternative textiles that are just as warm or fashionable,” Friedman says. “There is no need for fur in the 21st century and no place for it in a sustainable future.”

Friedman called fur a “fashion statement and statement of wealth. There is no need for warmth,” from fur, she said, mentioning the many faux fur products available. 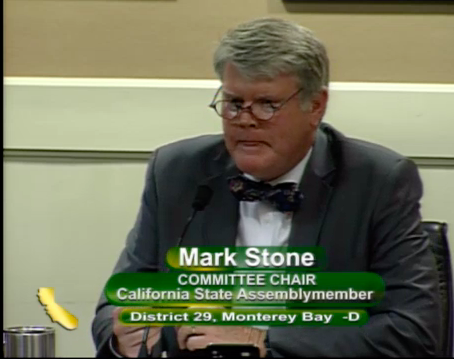 Tuesday the Assembly Judiciary Committee held a hearing on AB 44, which was charged with a lot of emotion.

After listening to witnesses in support of Friedman’s bill, Assemblyman James Gallagher (R-Marysville) said, “this makes me more sympathetic with the opposition.” Gallagher spoke about the small family-owned fur farms, albeit there are not many in California. “It is inhumane to raise animals for fur only, but not for meat and fur?” Gallagher asked Friedman.

“Wild animals are being kept in small cages or hunted and trapped and left to die in the wild,” Friedman said in response. “There’s a high probability they have suffered.”

Gallagher asked Assemblywoman Friedman if she’d ever visited a fur farm. “No, but I have the Los Angeles Zoo in my district and see wild animals kept in captivity,” Friedman said.  “Keeping them in small cages is inhumane. It is my contention that animals want to roam.”

“We raise chickens in cages,” Gallagher said. “Is that humane?” Friedman referred to California’s legislation and ballot initiative which voters passed to eliminate the use of chickens in cages in egg production.

Gallagher said if Friedman’s bill was passed, the same logic could be applied to the raising of cows and chickens. He was immediately admonished by Committee Chairman Assemblyman Mark Stone (D-Santa Cruz). “Don’t try to argue the bill in a different form,” Stone said. “I’m arguing implications of this bill,” Gallagher answered. Stone called it “speculation.”

Gallagher addressed the size and importance of the fur industry: “This is a large industry – $350 billion of manufactured goods in the U.S.,” he said. “If we get rid of this, we have faux fur, which puts more plastics in the water stream.”

“If you really want fur, you can use sheep and cow fur,” Friedman said. “Generally, I am concerned about polyester.”

Gallagher told Friedman her responses were emotional. “This shows there are a lot of problems with this bill.”

This is a curious ban, supported by the author’s revulsion of the idea of killing animals for their fur. “…there are still thousands of animals every year that are viciously maimed and murdered for only their fur,” Friedman said in a press statement. “This practice is not only entirely outdated and unnecessary, it’s completely out of line with our state’s values.”

In a dormant Commerce Clause case, a court is not only concerned with whether the law discriminates against out-of-state businesses or has the effect of favoring in-state economic interests over out-of-state interests, it determines whether the interstate burden imposed by a law outweighs the local benefits.

The International Fur Federation contacted California Globe about AB 44, and its own opposition to the bill: “Californians should be free to choose sustainable, natural fur,” said Nancy Daigneault, vice president of IFF. “While we support the bill sponsor’s goal to improve animal welfare, this bill would even ban humanely produced fur.”

Fur is an important and successful business. About half the furs produced in North America are now farm-raised. Worldwide, the figure is closer to 85 percent.

Following the hearing, a Capitol employee noted how tone-deaf the fur ban bill is, given that Gov. Gavin Newsom just issued a blanket eight-year clemency to death row criminals, ignoring the victims and families of victims. “We are arguing about the importance of treatment of animals, and the governor just gave heinously violent death row inmates, who are out of appeals, an eight-year pass,” he said.

8 thoughts on “California Fur Ban: Assemblywoman Friedman Calls it a ‘Statement of Wealth and Fashion’”