Blaming President Donald Trump, Assemblyman Brian Maienschein (R-San Diego), a well-known moderate, announced Thursday morning that he just left the California Republican Party and is registering as a Democrat, saying Trump has led the party “to the extreme.”

“Donald Trump has led the Republican Party to the extreme on issues that divide our country,” Maienschein said. “His conduct has been very offensive really since the beginning … his conduct was reprehensible, immature, counterproductive to what I believed was best for the country.” 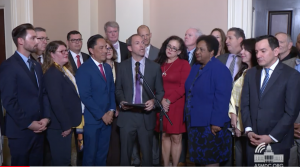 “But his leadership is not the only reason for my change in party affiliation. I, too, have changed,” Maienschein said.

It’s a curious statement given that Republicans in the California Legislature are a super minority, and influence very little within the Capitol. Notably, it’s San Diego Republicans who elected Maienschein, not Democrats. He offered no comment on the betrayal of his constituents.

However, one reason may be that Maienschein’s defection comes following a nail-biting re-election campaign. His Democrat challenger, Sunday Gover, posted a Tweet commenting on his veracity: “Those of us who were determined to elect a Democrat in the 77th Assembly District, will be watching closely to see whether Mr. Maienschein fully embraces our community’s values & rejects the Republican agenda, or whether his party switch is simply an attempt to hold onto power.”

Another reason for the defection is the rumor that Maienschein is planning to run for San Diego Mayor, potentially against Democrat Assemblyman Todd Gloria (D-San Diego). If this scenario feels familiar, it is. Former Republican Assemblyman Nathan Fletcher also left the Republican Party. Fletcher ran for San Diego Mayor in 2011. But only a few weeks after the local Republican Party endorsed his opponent Carl DeMaio, Fletcher announced he was leaving the Republican Party and became an Independent. He badly lost the race, and eventually left the Independent Party for the Democrat Party. Fletcher attempted another run for Mayor and lost in the Primary to another Democrat. He is currently on the San Diego County Board of Supervisors.

The Veracity of a ‘Turncoat’

Ms. Gover wasn’t the only one questioning Maienschein’s veracity. Assembly Minority Leader Marie Waldron (R-Escondido), said in a statement, “It’s unfortunate that Brian’s takeaway from his extremely close reelection was that his political future depended on becoming a turncoat. Unfortunately some people run for office simply because they want a job, regardless of political philosophy. It appears that Brian falls into this category.”

There are any number of reasons that elected officials switch parties, not the least of which is to gain more power and influence. In Maienschein’s case, he is/was a member of the minority party and is looking for leadership positions. Some still speculate that this is simply to get re-elected after the close 2018 race, while yet others say this is a longer term strategy to set himself up to become San Diego’s Mayor.

“While Brian is enjoying the perks of his new status as a member of the Democrat majority in the Legislature, we Republicans will continue to stand for the people of California,” Waldron said.