As Katy Grimes reports, Los Angeles Democrat Wendy Carillo has posted photos of herself on Twitter celebrating the Communist People’s Republic of China, which turns 70 on October 1. Nearly twenty years ago, San Francisco Rep. Nancy Pelosi led the way with a tribute to a Communist on the home front.

During the 1940s, Grigory Kheifetz was Josef Stalin’s intelligence Rezident in San Francisco. Kheifetz worked closely with Harry Bridges, a Stalinist and Soviet agent who headed the International Longshoremen’s and Warehousemen’s Union, and followed every twist and turn of the Communist Party line.

In  2001, on the 100th anniversary of Bridges’ birth, San Francisco Democrat Nancy Pelosi wrote in the Congressional Record: “Harry Bridges was arguably the most significant labor leader of the twentieth century.” Bridges was “beloved by the workers of this nation, and recognized as one of the most important labor leaders in the world” and his International Longshoremen’s and Warehousemen’s Union was “the most progressive union of the time.”

Some six years later, this came to the attention of Joshua Muravchik, a former leader of Young People’s Socialist League. In a Weekly Standard piece headlined “Pelosi’s Favorite Stalinist,” Muravchik noted that Bridges was “an Australian immigrant and devoted Communist” both the Roosevelt and Truman administrations tried to deport because he had lied about his Communist affiliation.

“So loyal was Bridges to Moscow,” Muravchik wrote, “that during the period of the Stalin-Hitler pact, he opposed the (1940) reelection of labor hero FDR, because Roosevelt was aligning the United States with Britain against Germany, and the ILWU printed antiwar pamphlets proclaiming ‘The Yanks Are NOT Coming.’ As soon as Hitler’s forces invaded the Soviet Union, Bridges did a 180-degree about-face on the war.”

Bridges and his union “took transparently pro-Communist stances” while denying Communist affiliation. “Only after the fall of the USSR, and the opening of Soviet archives,” Muravchik wrote, “did the truth emerge that Bridges had been not merely in the party but a member of the Central Committee of the Communist Party USA, a position for which the documents show he was directly approved by the Kremlin.”

A full nine years after this revelation, Pelosi delivered her worshipful tribute to the Stalinist labor boss. As Muravchik noted, she visited ILWU headquarters and praised “another prominent Bay Area Stalin fan, Vivian Hallinan, whose husband was Bridges’ lawyer and the 1952 candidate for president of the Communist-front Progressive party.”

If the future House Speaker had any second thoughts about this Communist tribute they have not emerged. For her part, Wendy Carillo might have added praise for a Communist in her native El Salvador. 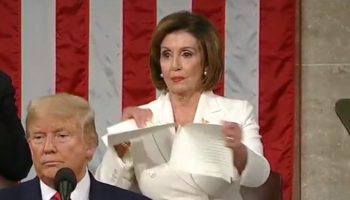 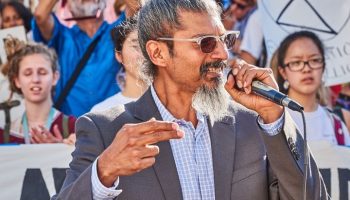 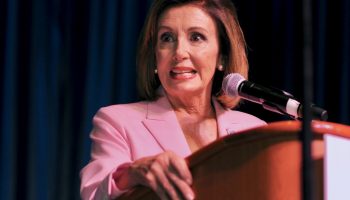 Despite President pulling out of Paris Climate Accord, Pelosi to ‘reaffirm the commitment of the American