When many Republicans learned that the California Republican Party leadership planned to change its bylaws to allow them to endorse a candidate in the recall election of Gov. Gavin Newsom, the fur started flying. It was assumed that the CAGOP planned to endorse former San Diego Mayor Kevin Faulconer.

The Globe did several interviews with California talk radio hosts on this issue, discussing the importance of the CAGOP needing to remain focused on the recall of Gavin Newsom rather than getting sidetracked with favoring a candidate.

Candidate Faulconer even sent out his own letter (below) asking the party to do the same.

SACRAMENTO – Today, California Republican Party Chairwoman Jessica Millan Patterson released the following statement on the CAGOP delegates’ decision not to endorse a candidate in the recall election of Gavin Newsom:

“Today’s overwhelming decision by our delegates to offer no endorsement speaks to the strength of our field of candidates and the outstanding position our party is in going into the recall election. We are squarely focused on putting California back on track by recalling the worst governor in California history. Gavin Newsom is arrogant, incompetent and a desperate politician who has failed Californians in every way possible. The state is burning, crime is spiking, homelessness is rampant, students have fallen behind, and taxes are suffocating working people. On September 14th, voters will end the Newsom nightmare once and for all and finally restore good governing to California.”

The CAGOP delegates’ decision occurred at a virtual endorsement meeting this morning. The four candidates who had qualified to be considered for the CAGOP’s endorsement were: Larry Elder, Kevin Faulconer, Kevin Kiley and Doug Ose. At the meeting, RNC National Committeewoman Harmeet Dhillon and RNC National Committeeman Shawn Steel put forward a motion to table the agenda item to vote on an endorsement so no endorsement would be issued in the recall race. The delegates passed this motion with nearly 90 percent support. The meeting was then adjourned.

This is Faulconer’s letter asking the CAGOP not to endorse a candidate. 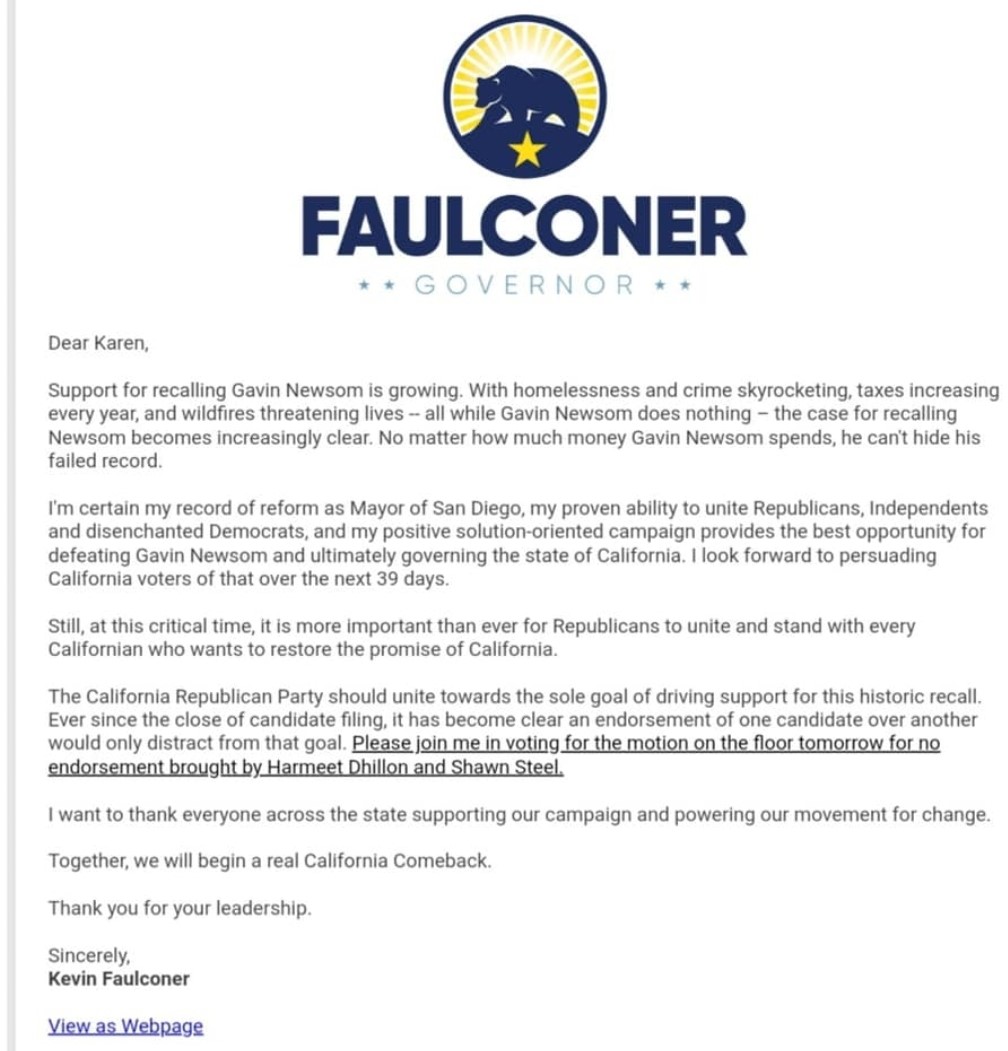 Gubernatorial candidate John Cox today issued a statement praising the CAGOP delegates. “Cox called on the California Republican Party not to endorse a candidate weeks ago in order to keep the Party united and focused on recalling Gavin Newsom.”

“Gavin Newsom has been a disaster for the state of California,” Cox said. “Out of control homelessness and wildfires, astronomical taxes and cost of living, water and electricity shortages, and terrible and hypocritical leadership during the pandemic are the hallmarks of Gavin Newsom. I commend the delegates for keeping their focus on Newsom’s failures. Weeks ago I said the Republican Party must be united to recall Gavin Newsom. Nothing is more important. I’m glad that Republicans heeded that advice and are leaving the convention focused on removing Newsom from office.”

Kevin Kiley for Governor fan page made a short and and to the point comment Twitter: “In my opinion this is good news.”

In my opinion this is good news https://t.co/An3w1ULhHU