Home>Articles>Facing Dry Year, CA State Water Board is Draining California Reservoirs
21 May 2021 2:20 am

Diener, a California water expert and farmer, has been warning steadily that water is unnecessarily being let out to sea as the state faces a normal dry year.

“Are we having a dry year? Yes,” Diener says. “That is normal for us. Should we be having water shortages in the start of our second dry year? No. Our reservoirs were designed to provide a steady five year supply for all users, and were filled to the top in June 2019.” 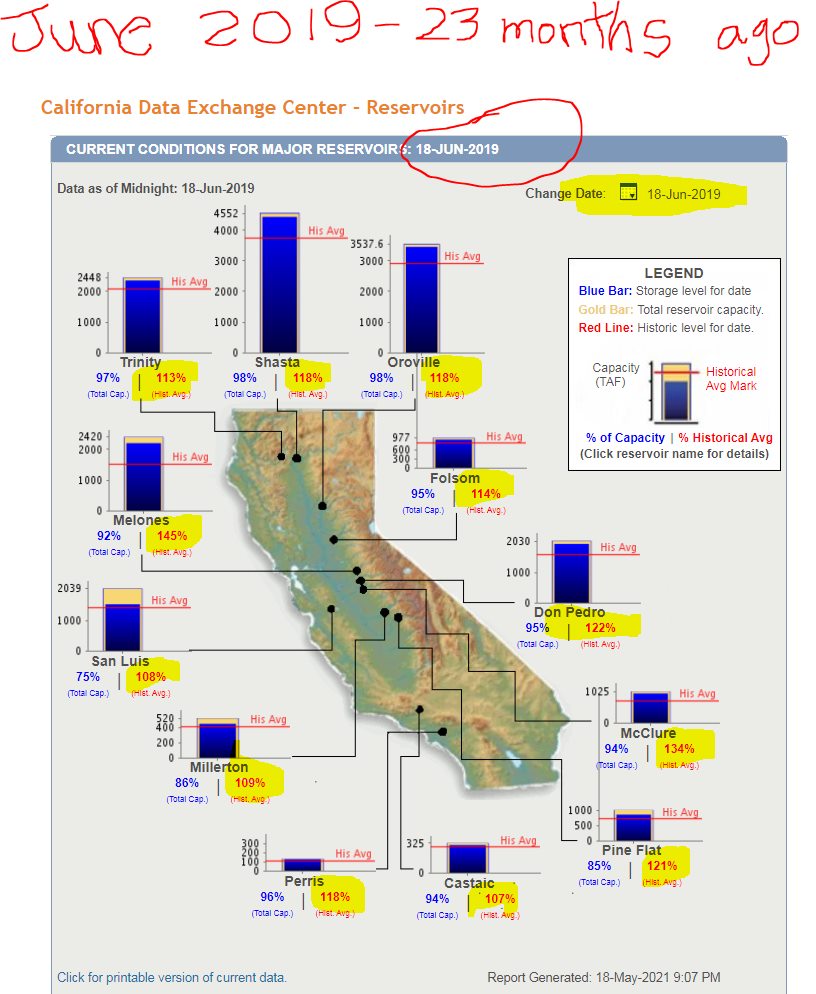 “You’re looking at our largest reservoirs less than two years ago. They were absolutely teeming with water from 107% to 145% of average!” Diener says. “Our reservoirs held enough water for everyone who relies on them for their water supply, for 7 years. We are barely into our second dry year. WHERE DID IT GO?”

“Where did it go” indeed. According to the California Legislative Analyst’s Office, statewide water use averages 85 gallons per person per day. But it’s always urban/residential water users ordered to conserve water: let lawns turn brown and landscaping die, limit showers and baths, wash clothing and dishes less frequently, and other absurd “helpful tips.”

Diener also asks, “How can this year be the driest year on record when it has more than 7 months left? That’s just fake news and crisis creation.”

“Before our magnificent reservoir projects were built, California never had a steady and reliable supply of water. Now water is being managed as if those reserves don’t exist, by emptying the collected water from storage to the sea, rather than saving it for our routinely dry years,” Diener says. “Our water projects were designed to be managed for the long term providing a minimum five year supply, but California has now put us on track to have a man made drought crisis every time we don’t have a wet season.”

Even San Francisco is suing the State Water Board. Diener explains:

The State Water Board’s 40% unimpaired flows plan is too radical. Requiring 40% of the Tuolumne River water to flow directly to the ocean without being used for anything else on its way, severely limits that river’s supply to Hetch Hetchy—the main water source for San Francisco.

The State Water Board has become the Department of Fish and Wildlife?

The Water Board has said they want to experimentally see if over time they can bring back about 1000 salmon, but it is such an extreme idea that some residents could be limited to as little as 7 gallons of water per person per day during back to back dry years, essentially making these regions uninhabitable. Doug Obegi of the NRDC, along with other well funded nonprofits, have unleashed a barrage of negative press harshly criticizing the city, and chiding them for what they call ”being on the same side as Valley farmers.” But S.F. is not backing down on opposing the plan which gained approval by the cheerleading of Felicia Marcus, former State Water Resources Control Board Chair and NRDC attorney.

Deja vu: In 2018, we addressed the California Water Resources Control Board and lawmakers’ charges of its misplaced priorities:

As chairwoman of the California Water Resources Control Board, Felicia Marcus oversees a massive state bureaucracy with a $1 billion annual budget.

In a prescient op ed today (2018) in the Modesto Bee, Assemblyman Adam Gray (D-Merced) had some harsh words for Marcus and her radical environmental cohorts. “Despite her promises to the contrary, she and her board have used their immense authority to jeopardize – not protect – the economy and drinking water supplies of the Northern San Joaquin Valley.”

Gray says, “The State Water Board claims it needs the water to help restore fish populations, but an earlier version of their own report suggested their plan would result in little more than an additional 1,000 fish per year.”

“Irrigation districts in Merced, Turlock and Modesto have all proposed responsible alternatives that call for a combination of increased water flows, habitat restoration and predation controls,” Gray said. “Unsurprisingly, the State Water Board has rejected those proposals out of hand while continuing to preach a preference for voluntary settlements.”

“The truth is, the board will never be happy until it gets our water – no matter the consequence to our economy or our drinking water supplies,” Gray added.

California’s residents, farmers and ranchers find themselves in this untenable situation once again.

Gov. Gavin Newsom’s recent $5.1 billion drought response package will not be used to create water abundance either. Instead, about $1 billion dollars will be used to pay off now unaffordable water bills that were made too expensive by intentionally creating water scarcity. When water restrictions are imposed, supplier revenues fall. They have fixed costs to deliver water and must raise rates as a result. #UseLessPayMore.

Here are the budget specifics, explained by Diener – there is much to be concerned about as she lays out:

“We all deserve better,” Diener says.

It goes on. You can read all of the non-water related drought proposals here.

If you want to delve more deeply, another article from 2016 delves into the “shadow government” appointees at the State Water Resources Control Board that ordered the release of massive amounts of water from the New Melones Reservoir and Lake Tulloch, to save a dozen fish, and how then-Gov. Jerry Brown systematically booted a number of qualified people off of the California Water Commission, the body that was responsible for decisions on how to spend $2.7 billion in public funds for Prop. 1 Water Bond water storage projects.