Last week the Supreme Court issued a decision striking down a New York gun law that puts unconstitutional restrictions on concealed carry of a gun out in public, as the Globe reported.

Less than one week later, it appears the California Attorney General leaked the state database of names and addresses of the state’s legal gun owners and concealed carry permit holders.

How could this happen – is it accidental or deliberate? California gun owners cheered the Supreme Court’s decision reaffirming that state officials cannot require concealed carry applicants to show “proper cause” and “demonstrate a special need for self-protection distinguishable from that of the general community.”

“The California Department of Justice’s 2022 Firearms Dashboard Portal went live on Monday with publicly-accessible files that include identifying information for those who have concealed carry permits. The leaked information includes the person’s full name, race, home address, date of birth, and date their permit was issued. The data also shows the type of permit issued, indicating if the permit holder is a member of law enforcement or a judge.”

The AG’s Firearms Dashboard Portal is currently down: 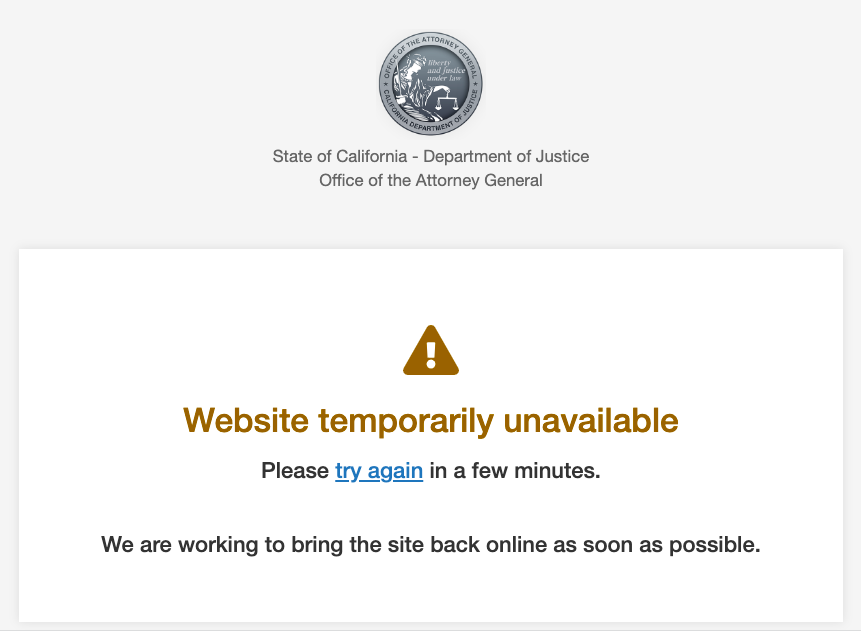 The Reload reported they reviewed a copy of the Lost Angeles County database and found 244 judge permits listed in the database including the home addresses, full names, and dates of birth for all of them. “The same was true for seven custodial officers, 63 people with a place of employment permit, and 420 reserve officers.”

Bill analysis of AB 171 specifies “the DOJ may at its discretion, also disclose specified information, to other nonprofit bona fide research institutions that are accredited by the United State Department of Education or the Council for Higher Education Accreditation for the study of violence prevention in the matter prescribed. Requires that any material identifying individuals to only be used for research and statistical purposes and prohibits reports or publications derived from the material from identifying any specific individuals. Requires DOJ to establish procedures for these requests and allows researchers to be charged reasonable fees related to their requests.”

The Reload reported that the office of Attorney General Rob Bonta confirmed private information had been exposed and said they are examining the situation.

The Reload published a statement from the California Rifle & Pistol Association, which they say “slammed the leak and said it was looking into potential legal action against the state.”

“Transparency is key to increasing public trust between law enforcement and the communities we serve. As news of tragic mass shootings continue to dominate the news cycle, leaving many with feelings of fear and uncertainty, we must do everything we can to prevent gun violence. One of my continued priorities is to better provide information needed to help advance efforts that strengthen California’s commonsense gun laws. Today’s announcement puts power and information into the hands of our communities by helping them better understand the role and potential dangers of firearms within our state.”

“Instead, the leaked private information of gun owners is likely to increase the risk criminals will target their homes for burglaries–something the state’s dashboard reports happened 145,377 times in 2020 alone,” the Reload reported.

In a statement following the U.S. Supreme Court decision in New York State Rifle & Pistol Association, Inc. v. Bruen, Attorney General Bonta said, “We are working with the Governor and the legislature to advance legislation that is both constitutional and will maintain safety for Californians. In the wake of mass shootings in Buffalo and Uvalde, and with gun deaths at an all-time high, ensuring that dangerous individuals are not allowed to carry concealed firearms is more important than ever. The data is clear and the consequences are dire — more guns in more places make us less safe. In California, we are committed to passing and defending commonsense, constitutional gun laws that save lives.”

Someone who believes “more guns in more places make us less safe” is likely to have illegally leaked the database of California’s legal gun owners following the landmark Supreme Court decision. And if so, legal recourse is called for immediately.