Home>Articles>California Assemblyman Triggered by Children’s Airsoft Toy Gun, Mistakes it for Actual Glock
24 May 2021 8:31 am

California Assemblyman David Chiu (D-San Francisco) tweeted out a photo over the weekend of what he referred to as the “discarded packaging of a semi-automatic” Glock handgun. PressCalifornia.com caught it and archived the Twitter thread.

At first blush the untrained may mistake the package as gun packaging – except guns don’t come in clear hard plastic packaging. And it says right on the label “Airsoft.”

Chiu Tweeted: “Finding the discarded packaging of a semi-automatic on a leisurely weekend walk was disturbing, particularly during this month’s surge of gun violence in San Francisco. #EndGunViolence #EnoughIsEnough“ 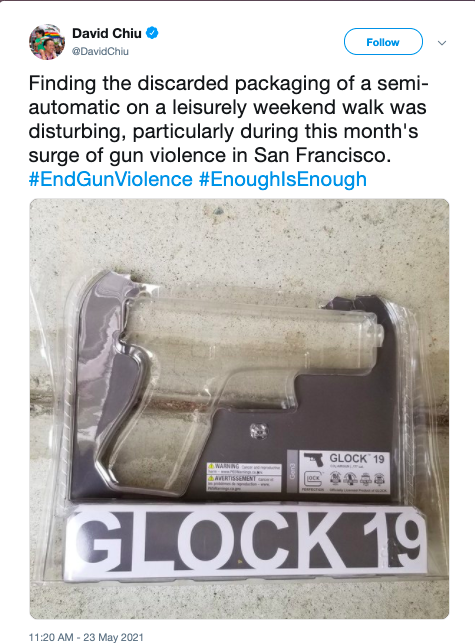 After he posted his Tweet, Chiu was excoriated for mistaking it for an actual semi-automatic handgun.

One response summed up the moment: “My favorite thing about this is that he saw it, clutched his pearls, whipped his phone out and thought to himself, ‘Oh I am SO tweeting this.’ The attempt at virtue signaling is just adorable.”

The reply Tweets were predictably entertaining: 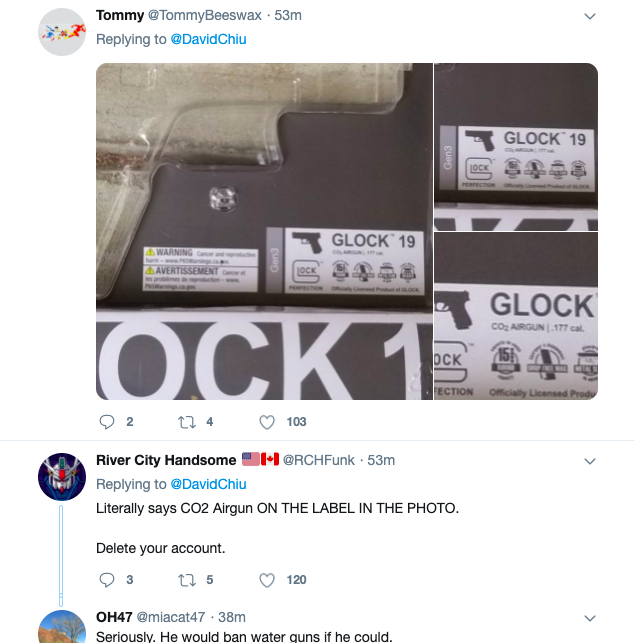 Assemblyman Chiu has been a reliable pro-gun control lawmaker.

A San Francisco legislator now is pushing the firearms industry to comply by proposing to scale back standards for the technology, known as micro-stamping, and remove older gun models from the market.

On Monday, Assemblyman David Chiu introduced AB2847, which would require that semiautomatic pistols sold in the state leave a single unique imprint on bullets that are fired — rather than two, as currently required. The marking, which reveals a gun’s make, model and serial number, is meant to help law enforcement investigations.

The gun industry has been dragging its feet on a common-sense law that would make guns safer and hold criminals accountable. Together, we can force them to take action that will save lives.

My new bill, AB 2847, would require gunmakers to incorporate microstamping technology — to imprint microscopic characters that identify a handgun’s make, model, and serial number on the casing of every bullet that is fired. Having this information is critical to solving countless crimes involving firearms, as well as to reducing the black market for guns. The bill would also require that new handguns include safety features to prevent accidental shootings.

This is the frustration pro-gun and Second Amendment groups have with lawmakers who are totally ignorant of guns, imposing gun control legislation and laws.

“Microstamping has reared up as gun control schemers elevate it as a sophisticated means of ‘gun safety,’ a sly euphemism for gun control,” Larry Keene, President of the National Shooting Sports Foundation recently wrote. “Gun control politicians push the ‘technology’ to ‘reduce gun violence.’ In their minds, microstamping connects the dots on crime, a criminally misused firearm and the criminal. Except that’s not realistic and forcing gun manufacturers to implement microstamping on new guns, or retrofit existing firearms, only limits lawful firearm ownership.”

“California is the only state to enact microstamping.”

Keene explains that since California passed a dual-placement microstamping mandate in 2007, despite the firearm industry, third-party researchers, and even UC Davis testifying that the technology doesn’t work, firearm manufactures have introduced no new handguns to California.

I deleted an earlier tweet that misidentified a Glock 19 air pistol. While not a semi-automatic, it's still disturbing to see remnants of a weapon that can cause injury, especially in an area where young kids play and while we are dealing with a surge of gun violence in SF.

You mean you didn’t notice the giant bright orange barrel that signifies it’s an air soft? Or you’re purposefully being a lying hack? pic.twitter.com/QPmRKmwwbo