All of the pork in this budget as California Globe has reported, are here, General Government Augmentations in 2019-20 Budget, Education, Resources and Transportation, Health and Human Services, and Public Safety and Judicial and TOTALS nearly $1.3 Billion in budget extras – items which were never vetted publicly, or debated in the public legislative committee hearing process, where the California taxpayers, who were heavily taxed to provide the money, could weigh in.

We’ve also seen lawmakers recently present giant checks to local charities, as if they are personally giving the money out of their pockets to the charity. That this is done within their own districts should be worthy of a complaint to the Fair Political Practices Commission of campaign and ethics violations. The photo below shows Assemblywoman Cottie Petrie-Norris (D-Laguna Beach) presenting a state check, with her signature on the front and her name where the bearer’s name goes on a check, to the United Way Orange County.

This next photo is of Assemblyman Rudy Salas (D-Bakersfield) presenting a $2 million check to the Valley Fever Institute in Kern County – Sala’s district. This check also has his signature on it, and lists his name as the bearer.

This is not commentary on the worthiness of the charities, but critique of the process, and the dubiousness of not funding these extra projects properly via legislation.

Another ceremonial check presentation was held Wednesday for the $3.5 million in pork to build a new dog park in Rancho Cucamonga.

When the budget was passed in June, Assemblywoman Melissa Melendez hammered this dog park project as well as others, and the hundreds of millions of dollars spent on pork projects buried in the state budget. Watch her floor speech HERE.

“Are those the values that we’re setting today, that we want our constituents to know about?” asked Melendez. “This is shameful.”

“Maybe our homeless veterans can sleep in a sculpture garden, or a dog park.” She added, “This is ridiculous.” 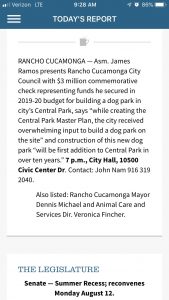