Home>Articles>California Drought Response: Water Board Cuts Off Water to Thousands of Farms
17 Jun 2021 7:01 am

The California State Water Resources Control Board announced that thousands of farmers in the Central Valley up to the Oregon Border will have their water curtailed until winter, the Globe reported Wednesday.

The order “targets 4,300 ‘junior’ water rights holders between Fresno County and the Oregon border and forces them to turn to sources of water other than surface supplies, such as wells or storage — or go without water entirely,” MSN reported.

When the State Water Board orders water cut off to farmers, the food supply is also cut.

California’s drought conditions are actually historically normal however, each of California’s droughts are billed by government and media as the driest period in the state’s recorded rainfall history. Scientists who study the Western United States’ long-term climate patterns say California has been dry for significantly longer periods — more than 200 years.

Droughts are nature’s fault; they are naturally occurring. Water shortages are the fault of government officials.

The California Farm Water Coalition reports how extensive this water cutoff is:

Conditions are similar to those that occurred in 2015. According to a 2015 drought report issued by UC Davis, ERA Economics, and the UC Agricultural issues Center, water supply cuts led to the fallowing of 540,000 acres of farmland, 21,000 lost jobs, and an economic loss of $2.7 billion.

Critical reservoirs, including Shasta, Oroville, Folsom, Millerton, and San Luis combined have 1.1 million acre-feet less water in storage today than they had at the end of March in 2015, California’s last critically dry year. Levels in these reservoirs are currently at 56 percent of average, compared to 72 percent of average at this time in 2015. They are essential to supplying rural communities with drinking water, irrigating farms, supplying water to wildlife refuges, and recharging aquifers in the Sacramento and San Joaquin valleys where a majority of California-grown food products originate.

“People can only conserve so much water, and so far, this region is nowhere close to reducing usage by 40%,”Central Valley farmer and water expert Kristi Diener said. “Managing scarcity will always fail. Creating abundance is the only way to succeed.”

“Californians already ratcheted back usage in 2015,” Diener added. “These new mandates are imposed on top of that on people who are already being as water efficient as they can be. If simply conserving at home was enough, we wouldn’t be having supply shortages right now.”

“Californians should not be in a drought, but due to Democrats’ lack of investment in water storage and critical water infrastructure, we are. Senate Republicans appreciate the governor heeding our call for emergency drought relief, but this declaration does nothing to remove regulatory roadblocks that hold up shovel-ready water projects,” said Senate Republican Leader Scott Wilk (R-Santa Clarita). “Our farmers and residential users deserve a clean, reliable source of water.”

In a letter to Democratic leadership, Senate Republicans outlined several key solutions that will help California in the next 12 to 24 months, including investment in water infrastructure and lifting red tape that are holding up shovel-ready water projects.

The state uses about 47.5 percent of its developed water supply for the environment, including wild river flows, managed wetlands and wildlife preserves, habitat and water quality control for fish, and required Delta outflows, according to the Department of Water Resource. Water is diverted in times of drought and times of plenty to the Sacramento-San Joaquin Delta, leaving much less for irrigation or for Californians to drink, residents will be limited to 55 gallons per day. 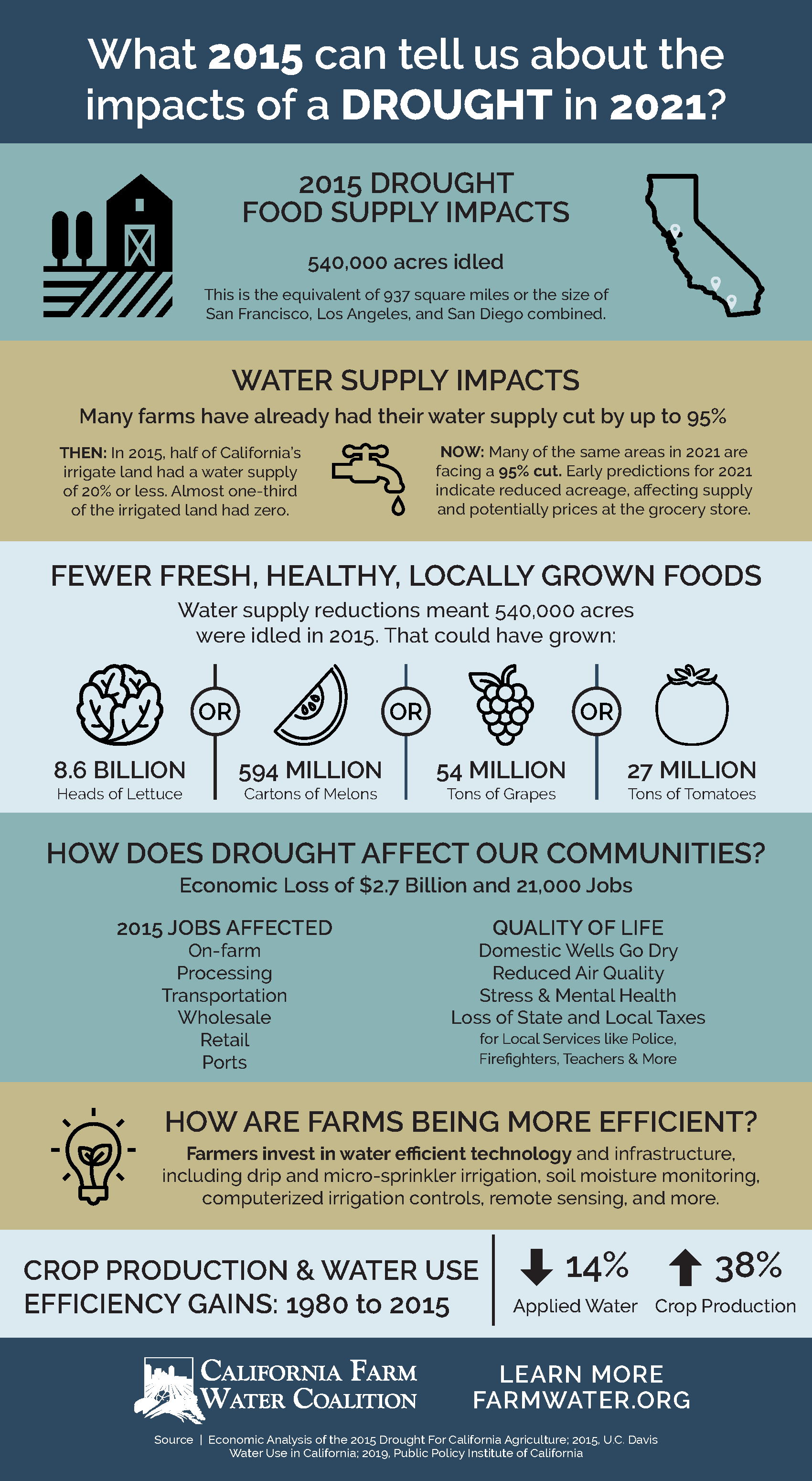 As the Globe recently reported, “the state has been letting water out of reservoirs across California for months now. And it’s not going to farmers, growers, ranchers or urban use. Environmental policy says the water ‘flows’ from reservoirs are necessary to produce a rebound of endangered Delta smelt and Chinook salmon – both species are close to extinction.”

California’s last drought, five years long, ended in 2017, which allowed Gov. Jerry Brown’s State Water Resources Control Board to restrict outdoor watering in urban areas by as much as 36% – but it’s not urban areas that use the bulk of the water in the state since 50% of California’s water supply goes to environmental uses.

Diener said, “50% of California’s water supply goes to environmental uses, 40% is converted to the food we eat and the clothes we wear, and the remaining 10% is for urban use. Families did not waste their way into a water shortage and cannot conserve their way out. Saving 25% of a 10% urban use equals 2.5%. Ongoing water releases continue to put fish over people, and both are suffering. More water rights holders than ever before are about to receive stop-using-water notices.”

Rather than encourage lawmakers to bring him legislation to beef up the state’s water storage capacity during the last drought, Gov. Jerry Brown signed new laws to limit each citizen to just 55 gallons per person per day by 2030, and 50 gallons by 2050.

As Diener asked, “While he still has his emergency powers, can’t the governor (Newsom) order stoppage of this outflow if California really is on the precipice of severe water shortages and a ‘rare mega drought?’”

18 thoughts on “California Drought Response: Water Board Cuts Off Water to Thousands of Farms”