In a formal letter to California Governor Gavin Newsom, President pro Tempore of the Senate Sen. Toni Atkins, and Speaker of the Assembly Anthony Rendon, California State Auditor Elaine Howle told them regarding the Auditor’s report sounding the alarm on EDD’s refusal to stop sending out full social security numbers through the mail.

the Employment Development Department has sent at least 38 million pieces of mail containing claimants’ full Social Security numbers since the start of the COVID-19 pandemic.

“Although EDD made progress in removing SSNs from some of the forms we reviewed, it has not removed them from the three that it most frequently mails,” Howle said. “In March 2019, we recommended that EDD prioritize amending those three forms, which together accounted for nearly 10 million of the 13 million problematic mailings we identified.”

Howle said during their original audit, EDD said its preferred method of addressing the SSN issue was to complete a systems modernization project that would take more than five years to complete. “Because of that delay, we presented EDD with several solutions that were intended to be lower-cost, interim measures that EDD could take to address the SSN issue. At the time of our audit, EDD agreed to immediately implement one of our suggested solutions: replacing full SSNs with a modified unique identifier. However, EDD has updated only two of the 10 forms we reviewed, neither of which were among the three forms we recommended it prioritize and, combined, accounted for fewer than 1.3 million—or 10 percent—of the 13 million mailings we identified in our original audit. By contrast, had EDD modified the three highest-volume documents as we recommended, it would have avoided sending full SSNs on nearly 34 million—or close to 90 percent—of the 38 million mailings it sent from March 2020 through mid-October 2020.”

Assemblyman Jim Patterson (R-Fresno) had plenty to say about this latest audit of the rogue agency:

“The EDD is an accomplice in identity theft and fraud. The State Auditor has been warning EDD about sending social security numbers through the mail for years. EDD knows that scammers are on the lookout for this information. They have thumbed their nose at state law and have put the identities of 38 million Californians at risk. The Governor needs to get a hold of this rogue department, clean house at every level and start demanding that they stop breaking the law.” 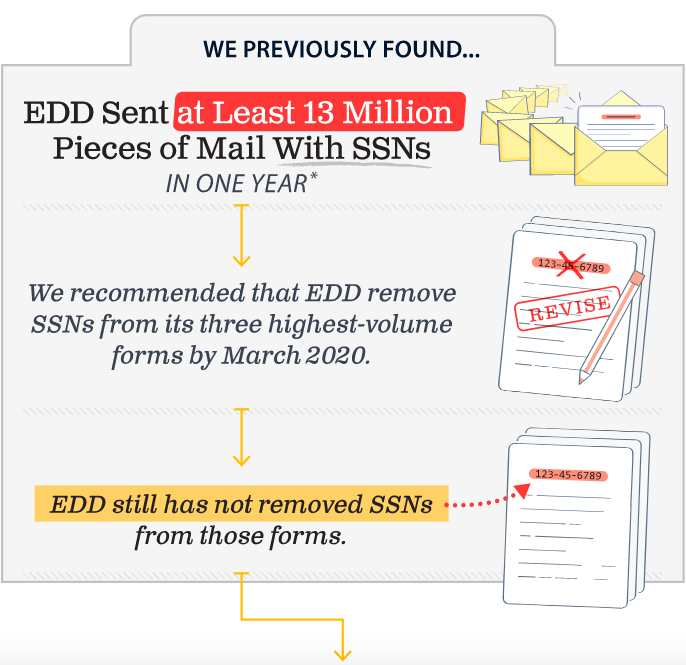 EDD has not yet removed SSNs from some of the most commonly mailed documents as we recommended, meaning that EDD has continued to place Californians at risk of identity theft. The recent surge in unemployment insurance (unemployment) claims resulting from the COVID-19 pandemic has further revealed the dangers of EDD’s practices. As millions more Californians filed unemployment benefit claims, the number of pieces of mail that EDD sent with SSNs printed on them increased dramatically.

At the request of the Joint Legislative Audit Committee as well as through separate statutory authority, my office is also conducting an emergency audit of EDD’s response to the COVID-19 pandemic, including its backlog of unemployment claims, its call center performance, and the adequacy of its information technology infrastructure. We plan to release the results of that review in early 2021.”