Thousands of firefighters continue to battle blazes across California. In Orange County, two firefighters are in critical condition after suffering major injuries battling the Silverado Fire. Every year around this time, firefighters risk their lives, and some of them lose their lives, protecting the rest of us from these catastrophic fires.

Deep respect for what firefighters do, however, cannot excuse us of our obligation to criticize the political agenda of the firefighters union. Moreover, it is likely that if the firefighter union leadership redirected their political priorities, it would save lives and property. It would free up firefighting resources, allowing them to be concentrated in remaining trouble spots.

In this fraught political season, California’s firefighters union has decided to endorse Prop. 15, the controversial “split roll” ballot initiative. If enacted, Prop. 15 will require business properties to be reassessed at market rates. If passed, the increased tax revenue is estimated at between $6.5 billion and $11.5 billion per year.

It isn’t necessary to debate the pros and cons of Prop. 15 here. Nor is it necessary to recap why it is the mission of every public sector union in California to increase taxes, despite the fact that Californians already pay the highest overall taxes in the United States.

Here, using 2019 data provided by the California State Controller, is what full time firefighters earn in pay and benefits. These numbers represent the average, the median numbers are even higher. And except in the data for CalFire pensions, these numbers do not include the individual cost of reducing unfunded pension liabilities, or prefunding retirement health benefits. Therefore these averages understate the true cost to taxpayers to pay California’s firefighters. 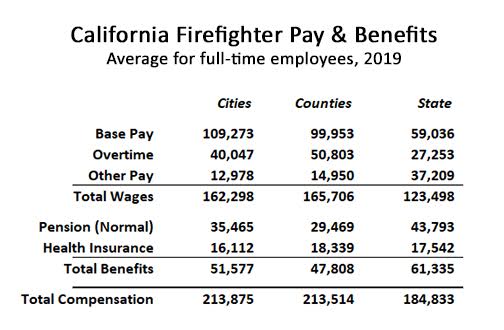 Notwithstanding the hypocritical nonsense about “closing corporate loopholes” and making “making rich corporations pay their fair share,” one widely broadcast television ad promoting Prop. 15 has a firefighter saying “to fight these fires, we need funding, plain and simple.”

That’s true, of course. And it will always be true, no matter how much money is forthcoming. Because public safety resources cannot possibly be permanently scaled to adequately address truly catastrophic wildfires. Instead, more effective methods of prevention – not just fire suppression – have to be reintroduced.

The Firefighters Union Needs to Stand Up to the Environmentalist Lobby

Debating whether or not full time firefighters should earn well over $200,000 per year, much less reducing it somewhat, may be a futile exercise. The firefighters union, like all public sector unions, exercises political control through campaign contributions. Politicians who are willing to tell a firefighter they make too much money are few and far between. As for convincing firefighters to quit their unions and thus defund them? Yeah, right. Quit a union that is the sole reason you’re making nearly a quarter million per year? Fat chance.

There’s another path, difficult to articulate because it might be interpreted as tacit acceptance of the legitimacy of public sector unions. But that’s a false choice. Public sector unions are an abomination. They have corrupted democracy, allowing government employees to run the government. They should be illegal and disbanded. Voluntary associations of government employees that have no collective bargaining power would be more than adequate to represent the interests of public sector workers. Laws governing all employees, public and private, would guarantee their rights as workers.

In the meantime, while we await a miracle, it still might be productive to suggest the firefighters union use some of their considerable influence to advocate something besides merely raising taxes and increasing their pay and benefits. And precedents for this have been set. In early 2019, the firefighters union marched with the United Teachers of Los Angeles, in a show of leftist solidarity that has nothing, absolutely nothing, to do with fighting fires.

This is proven by the example of Shaver Lake, where 20,000 acres of forest managed by Southern California Edison stayed intact, even as the Creek Fire surrounded and destroyed everything around it. Logging, thinning, and controlled burns (only possible after logging and thinning), are the reason those trees survived. By restoring a timber industry in California, much of the resources necessary to fight fires in conifer forests could be redirected towards controlling fires in chaparral.

Forestry reform has many productive aspects. Along with expanding the timber industry, reintroduce cattle grazing in appropriate areas. Expand California’s network of biomass energy facilities, something that could fund forest and chaparral thinning with ratepayer funded subsidies that are often less than what other forms of renewable energy are costing consumers. But all of this requires standing up to an environmentalist lobby that thrives and profits off conflict rather than solutions.

Everyone is grateful to firefighters for the work they do. But their union needs to decide. Along with fighting for more pay and benefits for their members, are they going to remain an ancillary wing of California’s leftist ruling class? Or will they pick one fight where they defy the conventional wisdom, and perhaps provide the tipping point to change it?

Will California’s firefighting unions fight to reform California’s forest management laws and regulations? That would take almost as much courage as fighting forest fires. And it would help everyone and everything – people, trees, wildlife, the economy, and the tax base.

6 thoughts on “Firefighters Union Backs Prop. 15 Instead of Forestry Reform”