“If we don’t act now, more lives will be lost,” California Gov. Gavin Newsom said Thursday at a press briefing announcing statewide lockdown orders and travel restrictions. “We want to nix mixing. Full stop.” Newsom added. The governor claims “Our ICUs are climbing quickly toward their capacity. Our death rate is rising…” says the governor who only weeks ago attended a swanky dinner in Napa Valley with 22 other people. He obviously didn’t believe that “more lives would be lost” by his attendance at the dinner.

But the “death rate” due to COVID is not rising the way Newsom would like you to believe it is when taken in context of the nine months since the March lockdown.

Remember that many of the “deaths” were counted as COVID deaths, when the patient died from something else (motorcycle accident, heart disease, cancer), but tested positive for COVID while in the hospital. This has caused a great deal of distrust among the people – many who have reported a loved one’s passing of a car accident, cancer or heart disease, and having it coded as a COVID death.

“This is an opportunity to save the life of a loved one or a neighbor,” added Dr. Mark Ghaly, Secretary of California Health and Human Services. “Be at home. Don’t mix. Don’t move,” said Ghaly.

Dr. Ghaly and Newsom insisted that none of their orders are punitive, but told Californians “all non-essential travel is restricted and hotels are being told only essential workers may schedule stays. Bottom line: Gov. Newsom says you need to cancel your Christmas travel plans.

Newsom claimed his orders are based upon epidemiology and transmission rates. But he never presented epidemiological evidence, and mostly talked about COVID “cases,” which are merely positive COVID tests, of which most people never feel or show symptoms, or if they do, they are mild flu-like symptoms.

California Globe had a question for the governor, but was never granted the opportunity by his staff to ask during the almost two-hour briefing, We wanted to know:

Why does CA have an emergency?”

The Globe will be posing the question to Gov. Newsom and Dr. Mark Ghaly this week.

The governor and Dr. Ghaly continue to selectively report “cases” of positive COVID tests, but not real illnesses. As epidemiologists have reported to the Globe, the only COVID numbers that matter are hospitalizations and deaths.

The governor talked about the ramped-up restrictions leading into the Thanksgiving holiday, and reported that the California Alcoholic Beverage Control made 3,500 “compliance” visits before Thanksgiving to bars and restaurants, indicating there would be more to come. But these aren’t punitive.

Some other very important questions for Governor Newsom that went un-asked and unanswered in the press briefing:

The governor spent more time talking about all of the exciting programs he has come up with to assist the state’s closed down businesses, rather than re-opening the state. And he pushed the impending vaccines, explaining that the first 300,000+ will go to essential workers.

As the press briefing was taking place, the Globe opened the California COVID-19 website, as we do daily, to see any updates on hospitalizations, ICU patients, deaths, etc… 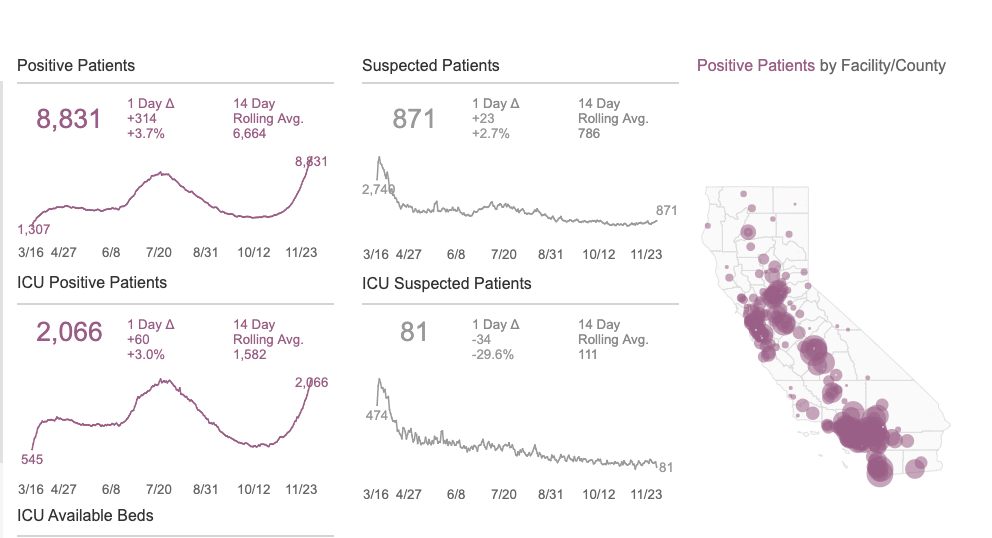 This is interesting because as the Globe reported Nov. 29, there are 74,180 total hospital beds in the state, according to the California Department of Public Health. The state COVID dashboard showed 7,684 patients hospitalized in California for COVID-19, and 2,019 ICU beds available.

And we posted this screen capture: 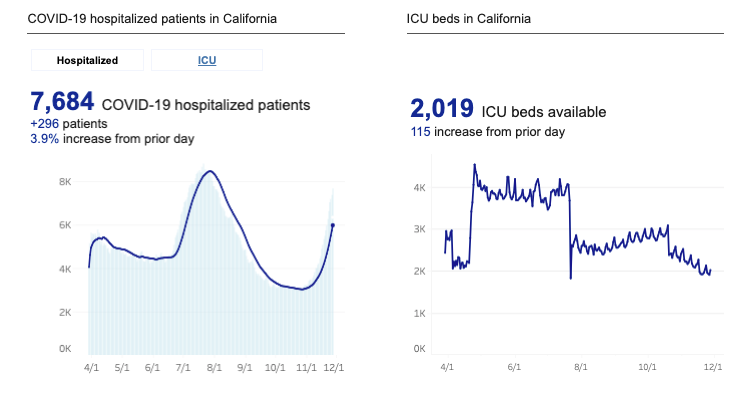 Additionally, the governor reports giving 24,474,642 COVID tests. Of those:

In Thursday’s press briefing with Gov. Newsom and Dr. Ghaly, they both referred to a lack of available ICU beds, but didn’t report any numbers. According to reports last week, UC Davis Health officials report “right now, almost all of our hospital space is needed for non-COVID health care needs.”

We also reported last week that when comparing California’s “cases” with the 49 other states, media got it wrong when they said the Golden State has the the highest of any state in the U.S.

We also reported and asked:

However, UC Davis Health officials reported in that same article, “right now, almost all of our hospital space is needed for non-COVID health care needs,” and “Only 5% of the Sacramento medical center’s patients are being treated for COVID-19.”

So which is it – is there a surge in COVID illnesses, or not?

So what is Gov. Newsom now shutting down just in time for the Christmas season?

Remaining open under severe restrictions are:

The Regional Stay Home Order, announced December 3, will go into effect within 48 hours in regions with less than 15% ICU availability. It prohibits private gatherings of any size, closes sector operations except for critical infrastructure and retail, and requires 100% masking and physical distancing in all others.

The order will remain in effect for at least 3 weeks and, after that period, will be lifted when a region’s projected ICU capacity meets or exceeds 15%. This will be assessed on a weekly basis after the initial 3 week period. Learn more about this order.

The state released a map of five regions and their current ICU capacity, as well as projected dates when regions will fall below the 15 percent threshold. The regions are:

Here is the color coded map showing which of Californias 58 counties are fully locked down: 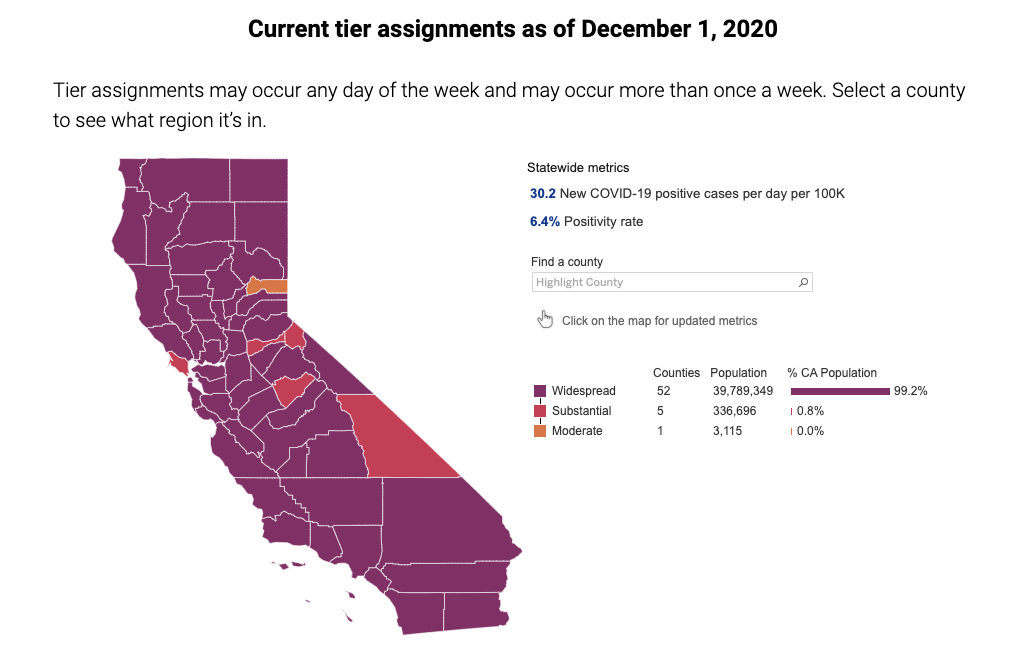 “Governor Newsom clearly doesn’t understand that Californians are tired of being locked in their homes. He has ignored the calls from parents with children falling behind socially and academically while his own children attend in-person private school.. He is ignoring the cries from small business owners struggling to keep their dreams alive, desperately trying to avoid the over 19,000 businesses that have permanently closed. The insanity of another lockdown and expecting a different result is madness. To add insult to tremendous injury, the Governor and too many democrat elected officials don’t even follow their own mandates. Californians damn well deserve better.”

“Shutting down the state again will only hurt the citizens of California. Nowhere in the nation has it been proven that this is an effective method of combatting the coronavirus. The first closure drove the state into a recession. Storefronts are boarded up. Many mom-and-pop shops are on the brink of permanent closure.

“The first shutdown put millions into unemployment. Hundreds of thousands of Californians are still waiting for their benefits, while Gavin Newsom’s EDD sends cash cards to death row inmates.

“Elected officials cannot abide by their rules, and now, they are imposing stricter rules on everyday Californians? Not only are these officials breaking their own guidelines, they are flaunting their wealth and privilege while millions of Californians are on unemployment, waiting for unemployment or lining up at food banks.

“Shutdowns disproportionately impact the working class and the working poor. High income earners are doing well, many are flourishing from the comforts of their homes.

“Children of the rich are attending schools and participating in their activities – learning and thriving. Children in public schools, however, are Zooming like zombies – failing and declining in mental health. Sadly, many are facing unchecked abuse or neglect.

“Governor Newsom continues to disrupt life as we know it without releasing the full data behind his decisions or showing the impact his actions are having on our lives. With all the changing guidelines over the last 9 months, evidence-based decision-making has to become the standard and not this hodgepodge approach advanced by the governor. Californians have a right to public health data that is being used to shape their lives, and the governor owes the state leadership that is committed to transparency and accountability.

“And to be clear, it’s not just about the numbers of COVID-19 cases and hospitalizations he runs through in his almost-daily press conferences, but the data and facts about the toll his shutdown orders are taking on Californians’ mental health, on our children’s education, including the achievement gap, on domestic violence and child abuse rates. The response cannot be worse than the disease itself and we have to ensure the state’s actions are based on a holistic approach that protects our mental, social, and emotional well-being along with our physical health.”

“On Monday, Governor Newsom vaguely alluded to ‘drastic action’ if the rate of COVID-19 cases continued to rise and Californians did not change their behavior. Lawmakers were given no further information. Yesterday, California reported the highest single day number of new cases. Again lawmakers were given no further information. Today the governor announced a plan for regional shutdowns, which we learned of first from lobbyists and reporters. The legislative branch cannot keep being left out of the decision-making process.

Hoping for the internal data to explain why @GavinNewsom shuts down specific CA industries? You're out of luck.

“In a letter sent last week, Sen. Borgeas demanded answers for Gov. Gavin Newsom’s pre-Thanksgiving order to send nearly the entire population of California into the purple tier of the state’s reopening scheme.

A key element of the “pulling of the emergency brake” by the Governor was the closure of indoor dining.

In a manner not unlike a math teacher, Borgeas demanded the Newsom administration show its work that led it to the conclusion of shutting down indoor dining.”

As the Globe has also attempted to acquire data and metrics, the SV Sun reports that it “doesn’t really exist.”

“I was told they did not have data on transmissions,” Borgeas said. “And that there was no industry-specific breakdown of transmissions.”

Lastly, there is a lot of anger in the state right now with this latest lockdown order. Dave Rubin of the Rubin Report sent this message to Los Angeles Mayor Eric Garcetti (warning: explicit language):

A very special message for Los Angeles Mayor Eric Garcetti on this very special episode of The Rubin Report. #VerySpecial