In his press conference Monday, California Gov. Gavin Newsom attempted to distance himself from Tesla CEO Elon Musk’s threat to move his company headquarters and production facilities out of state because of  Newsom’s statewide shutdown orders. Musk’s plant has been closed since mid-March.

On Saturday, Tesla CEO Elon Musk threatened to move both the company headquarters and production facilities to Texas or Nevada if they were not allowed to reopen as soon as possible, as California Globe reported.

Tesla’s plant has been ordered to remain shut, even though all other car manufacturers in the US are allowed open, Musk said.

The billionaire CEO, who employs 10,000 at his Alameda plant, said Tesla would relocate its headquarters and future programs out-of-state, which elicited a “F*ck Musk” Twitter response from Assemblywoman Lorena Gonzalez (D-San Diego).

And then Musk opened his Alameda plant Monday, against the governor’s lockdown order.

Newsom was asked in the press conference about the ongoing fight over the shutdown order Musk is threatening to move his company out of state over.

Gov. Newsom dodged the real issue – his Executive Order shutting down the entire state – and said the fight was between Musk and Alameda County, and not with the state. “I respect the counties,” Newsom said. “We recognize the localities.”

Except, several counties which have reopened have businesses that have been punished; the State is sending in agents from the California Department of State Alcoholic Beverage Control (ABC) to close down bars. And the state’s ABC was doing this without notifying the local authorities.

“My understanding is they’ve had some constructive conversation,” Newsom said about Musk and Alameda County. “It’s county-led enforcement. Alameda County health department will be following up with this.”

“Tesla has filed a lawsuit against Alameda County, California, where Tesla’s Fremont factory is,” Business Insider reported. “The factory has been closed since March 23, when Alameda County ordered it to shut down as part of social-distancing measures directed at curbing the spread of COVID-19.”

“In the lawsuit, Tesla alleges the shutdown ignores an earlier order from California Gov. Gavin Newsom that permits businesses in “16 crucial infrastructure industries,” including transportation, to continue work. It alleges the decision is both unconstitutional and “inexplicable” and says there is ‘no rational basis’ for the facility’s closure.”

“Wasn’t the purpose of the Western States compact to avoid this?” Newsom was asked. The governor again dodged the question and said they would “continue to work at the county level.”

“Many of us are frustrated by this pandemic,” Newsom said. “We are getting close… regardless what some people are saying on social media and the press.” 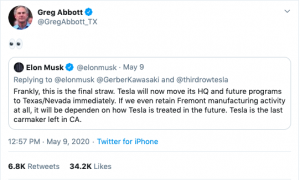 “Frankly, this is the final straw. Tesla will now move its HQ and future programs to Texas/Nevada immediately. If we even retain Fremont manufacturing activity at all, it will be dependent on how Tesla is treated in the future. Tesla is the last carmaker left in CA,” Musk Tweeted.

Alameda County Public Health officer Dr. Erica Pan issued an Order for all members of the public to wear face coverings outside of their homes, and extended the Shelter in Place order in Alameda County and six (6) neighboring jurisdictions through May 31, 2020.

Newsom’s press conferences are now done remotely, not from the Capitol, but from the Office of Emergency Services, and there is no Capitol Press present; reporters must call in to ask questions. The cals are screened. Notably, no one in the press calling in challenged Newsom on his answers, or was allowed to challenge.