Governor Newsom has unveiled his budget proposal for the fiscal year 2020-21, and it comes in at a whopping $222 billion. That’s up from $209 billion last year, and sharply up from a few years ago. Backing up a decade, the 2010-11 budget totaled $130 billion. What on earth could justify a 70 percent increase in spending in just ten years?

Shown below is the shocking growth in California’s state budget over the past forty years. The chart includes not only general fund spending, along with special funds and bonds, but also federal funds which are not included in the $222 billion total, but which are administered by the state and spent in California.

As can be seen, the growth hasn’t been uniformly up. There was a drop during the mild recession in the mid 1990s, another one in 2004-2005, and a plunge during the great recession that affected 2011 through 2014. But overall, spending growth over the past 40 years looks a bit like the proverbial hockey stick. 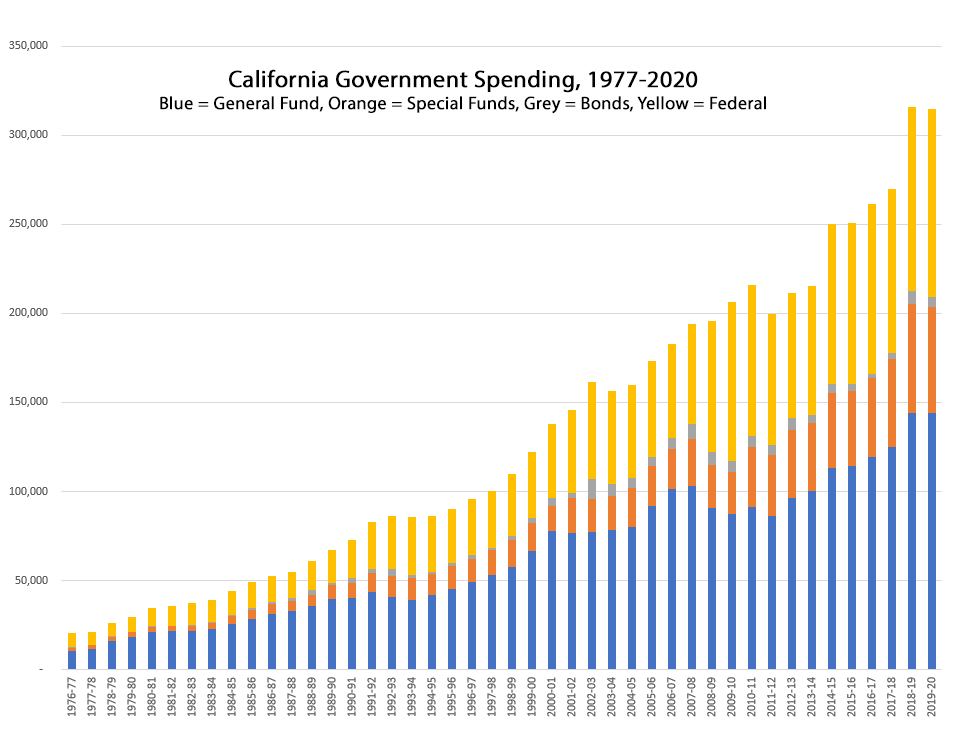 To have a fair discussion of spending growth in California, however, it is necessary to adjust for population growth and the impact of inflation. That is not a problem, since population data, CPI trends, and historical budgets are all easily found online. Back in 1977 California’s population was 21.9 million, and the CPI was 56.9. For the last five years, California’s population has hovered just under 40 million, growing by only a half million in that period of time, averaging barely 100,000 per year (ponder that fact, Gov. Newsom).

Shown below is per capita state government spending in California expressed in 2019 constant dollars. Viewing this information puts the current budget growth into context, and as can be seen, the trends are sharply upward, especially in the last two years.

Examining the categories of spending growth separately, all of the categories show huge increases. In constant 2019 dollars, per capita general fund spending has risen from $2,124 in 1976-77 to $3,650 in 2019-21. Special Funds spending has soared, from $418 per capita in 1976-77 to $1,507 in 2019-20. And Federal contributions to the state have also risen sharply, from $1,637 forty years ago to $2,669 today. In constant dollars, adjusted for inflation, per capita state spending in California has roughly doubled over the past forty years. 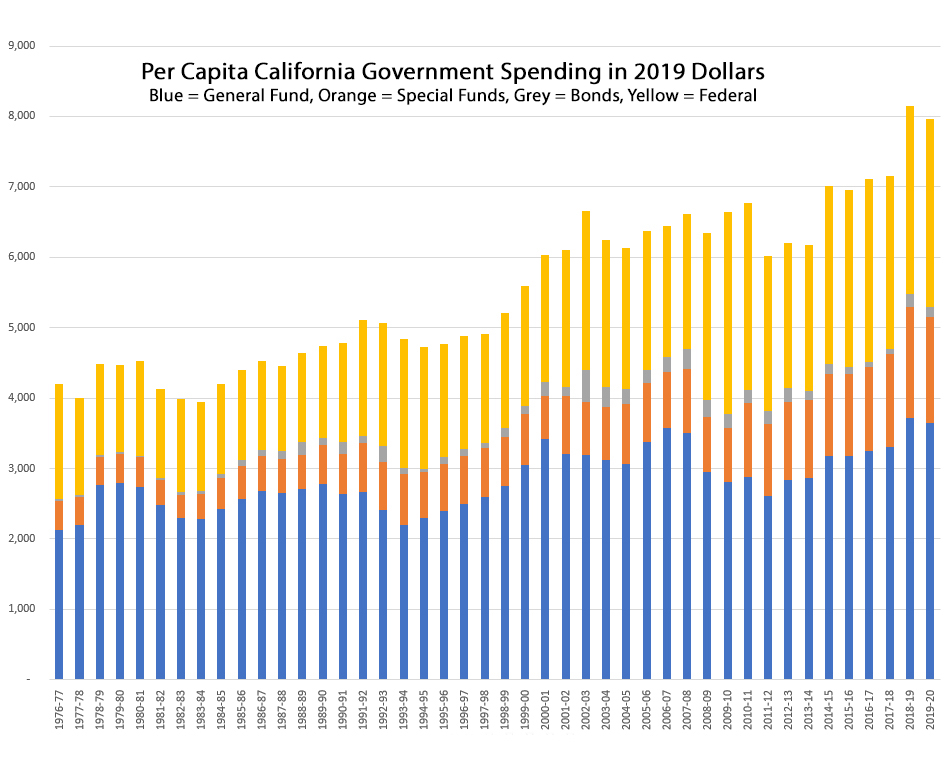 From this analysis, it should be obvious that California’s government has been spending more every year, a lot more, even after adjusting for population growth and the impact of inflation, and the trend has been nearly continuous for the last forty years. To suggest that Californians should pay more in taxes to support a near doubling in per capita government spending because Californians have more income today is so ridiculous that further analysis isn’t required. Just look around.

There have been many improvements to our lives over the past forty years – the tech revolution and precision medicine, to state two obvious examples – but apart from cleaner air and less crime, the state can’t take much credit for improvements to the quality of life for Californians. The state can take credit, however, nearly exclusive credit, for making California unaffordable, for ruining California’s public schools, for driving up the cost of college tuition and neglecting our highways. And the state is fast losing all the gains that were made in fighting crime since the 1970s.

So while there are plenty of pet programs to assail in Newsom’s budget, and some trillion dollars in debt and unfunded liabilities that make mockery of the alleged surplus, the elephant in the room is to compare where we are to where we were. What happened? We spent more, much more, and life is harder, much harder. The workers are moving out, while the indigent pour in for the benefits and the super wealthy invest in security systems and beachfront property.

It’s important to ask where all this money goes. It’s important to make the obligatory pie charts and understand who gets what. But more important is why are we spending so much? Why is the pie so much bigger today, yet provides less nourishment than ever?

Trillion of dollars in debt and unfunded liabilities make a mockery of the alleged surplus.