Is California Gov. Gavin Newsom running for reelection or for U.S. President? His new cringeworthy television ad airing in Florida indicates the latter, which is apropos. He has spent the last three years treating the residents of California like subjects as he casts his eye upon 1600 Pennsylvania Avenue.

The 30-second ad is running on Fox News Monday July 4th, and is directed at Newsom’s freedom-loving nemesis Florida Gov. Ron DeSantis and his policies, drawing a stark contrast with California, which is still under Newsom’s COVID State of Emergency order – more than 820 days.

“It’s Independence Day, so let’s talk about what’s going on in American,” Newsom says in the open.

“Freedom is under attack in your state.”

“Republican leaders are banning books, making it harder to vote, restricting speech in the classroom, even criminalizing women and doctors.”

“Freedom is under attack in your state,” Newsom tells Floridians – the same Floridians who were not locked down for two years, or forced to wear masks and get vaccines; whose kids weren’t locked out of school and forced to Zoom school from home; whose kids played sports and enjoyed normal activities and socialization while California kids suffered immeasurably with no sports or clubs or dances or graduations.

And, Californians’ “freedoms” have been stripped as Newsom and the state’s Democrat politicians refuse to responsibly deal with the homeless drug-addicted, mentally ill vagrants living on our streets, in our parks, along rivers, accosting and attacking people in parking lots, and near businesses, and in rotting downtowns where they work and live.

Californians’ freedom is gone when hardened criminals are released from jails and prison to the streets by Gavin Newsom, to prey upon businesses and residents. Violent crime is so prevalent in the state it has spiked in the cities, yet police are being defunded and repurposed. Felonies have been  reclassified as misdemeanors, and misdemeanors are now citations. Criminals are let out back to the streets to terrorize the people.

Florida doesn’t look like this, yet every California city does:

Newsom tells Floridians: “Republican leaders are banning books, making it harder to vote, restricting speech in the classroom, even criminalizing women and doctors.”

Is Florida Gov. Ron DeSantis really “banning books?” Actually, under Gov. Ron DeSantis, Florida has eliminated “critical race theory” from curricula in its schools. “The Florida Department of Education has released examples of what it calls ‘problematic’ material that led it to ban dozens of math textbooks — including a lesson with an algebra graph measuring racial prejudice,” the NY Post reported. Gov. DeSantis took charge after parents were outraged at the indoctrination and even exposure to dangerous and divisive concepts under the guise of public education curricula. California students are being fed a steady diet of CRT, vile sex indoctrination, “unconscious bias,” while being deprived of U.S. History, English, Math, and real Science.

Newsom continues in the ad:

“I urge all of you living in Florida to join the fight, or join us in California.”

“We still believe in freedom, freedom of speech, freedom to choose, freedom from hate, and the freedom to love.”

“Don’t let them take your freedom.”

And parents haven’t been able to experience that “freedom of speech” at school board meetings without getting labeled “terrorists” and “extremists” for objecting to sexualized school curriculum and Critical race theory.

Newsom said California believes in “freedom to choose.” This is code for abortion on demand in California, the Abortion Sanctuary State. Sadly, the babies killed don’t have a choice.

Newsom said California believes in “freedom from hate.” Ask Conservatives how free they are from hate in the state. Ask the parents at school board meetings about the hate spewed at them for their objections to their kids being indoctrinated and mentally abused by radicalized activist teachers. Ask Conservative gay residents of California about they hate they receive.

Newsom said California believes in the “freedom to love.” All 50 states have this “freedom,” including Florida. On June 26, 2015, the United States Supreme Court ruled 5-4 that gay marriage is a constitutional right, meaning that all 50 states must allow it and that all existing bans are invalid.

Gavin Newsom has said he has “sub-zero interest” in running for President. This ad defies that.

That’s some audacity! Gavin Newsom who fundamentally undermined individual and religious freedom and basic principles of democracy, who still claims emergency powers running one of the the most autocratic state regimes in history is trying to lecture FL Governor about “freedom.” 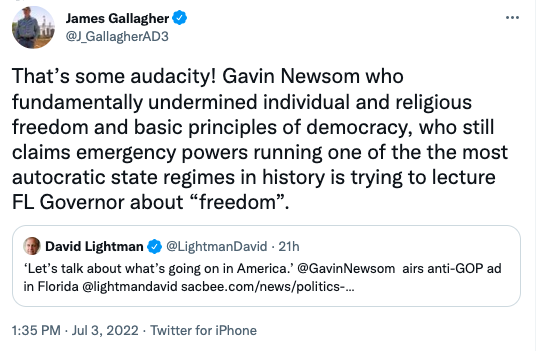 How about how Gov. Newsom and his predecessor banned oil and gas exploration. The vast energy resource beneath the San Joaquin Valley is known as the Monterey Shale. It has been reported that hydraulic fracturing could create 512,000 to 2.8 million new jobs, personal income growth of $40.6 billion to $222.3 billion, additional local and state government revenues from $4.5 billion to $24.6 billion, and an increase in state GDP by 2.6 percent to 14.3 percent on a per-person basis. But our Governor banned it.

How about California’s water rationing when we live on the Pacific Coast and this manufactured drought? California under Gov. Newsom is starving the Central Valley Farmers of water for their crops.

California has 1/3 of the nation’s welfare recipients and 12% of the country’s population. California is a sanctuary state for illegal immigrants, who now receive free health care, courtesy of the taxpayers.

Gov. Gavin Newsom’s hubris with this ad shows he lacks any self-awareness or ability to feel how the people of California are suffering – a common trait found in most autocrats.