Governor Gavin Newsom signed Senate Bill 265 into law, ensuring that, regardless of having unpaid meal fees, every student in California can receive a meal without being shamed or treated differently because of it.

It will still be required for parents to pay the balance due by the end of the year, but the child would not be shamed for getting a meal despite money being owed. A hungry child can receive a meal no matter what.

Examples of “lunch shaming” have included calling out students by name publicly, forcing a student to return a meal, making students stay behind during recess to “work” off the debt, and other similar actions. California is only the latest state in the nation to take action. “Lunch shaming” has received attention nationwide, with states acting on either reducing or, as in California’s case, eliminating the action from public schools.

The bill was introduced by Senator Robert Hertzberg (D-Van Nuys) earlier this year, as he has been a proponent of free or reduced price school lunches for years, and has spoken out against “lunch shaming” policies in the past.

However SB 265 wasn’t gaining much attention until June when a 9-year-old Napa student named Ryan Kyote personally paid off the school lunch debt of several students, amounting to nearly $80. This garnered nationwide attention, had both Democratic and Republic politicians supporting his decision, and brought SB 265 into the forefront. Governor Newsom personally met with Kyote in August and announced his support of the bill.

The bill quickly passed the Assembly and the Senate with full bipartisan support, and then was signed by the Governor, who was still giving Kyote as a key reason in his decision.

“Creating a ‘California for All’ means ensuring schools are inclusive, accepting, and welcoming of all kids. These bills help move us closer to that goal,” stated Governor Newsom after the signing. “I want to thank Ryan for his empathy and his courage in bringing awareness to this important issue.”

Governor Newsom also posted a Tweet after his signing: 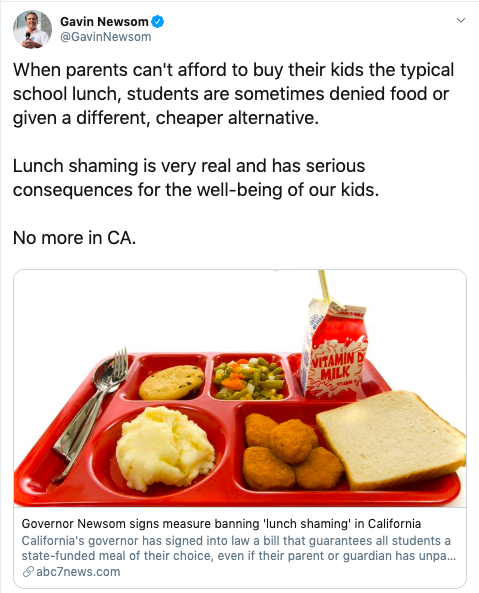 When parents can't afford to buy their kids the typical school lunch, students are sometimes denied food or given a different, cheaper alternative.

Lunch shaming is very real and has serious consequences for the well-being of our kids.

No more in CA. https://t.co/MBL9BOICal

Senator Hertzberg also responded positively to his bill passing, saying “Thank you Governor Newsom for signing my bill, SB 265, which will end the practice of school lunch shaming once and for all in California!”

SB 265, which received no large-scale or vocal opposition, went into effect immediately after signing.