“It is our hope that all schools will be able to physically open for five days per week in the fall but local conditions will determine whether that is possible.”
– Cecily Myart-Cruz, President, United Teachers of Los Angeles (UTLA Update 5/14/2021)

California’s budget bonanza, just announced last week, capitalizes on conditions unique to California that in retrospect are obvious. The COVID lockdown may have decimated California’s working families and small businesses, but the explosion in online activity delivered stupendous windfalls to California’s high tech industry. In California’s top heavy income tax model, the more money California’s super rich make, the more money pours into the state treasury. And pour it did. Quoting from the May Revision of California’s 2021-22 state budget:

“Compared to a projected budget deficit of $54 billion a year ago, the state now has a projected $75.7 billion surplus. Combined with over $25 billion in federal relief, this supports a $100 billion California Comeback Plan—a once-in-a-lifetime opportunity.”

This hundred billion dollar binge is a welcome distraction for the embattled Governor Newsom, who faces a recall election later this year. And of course, spreading an extra $100 billion around the state should certainly offer short-term relief, even in California’s $2.7 trillion economy. But as always, how this money is spent is more important than how much is spent. For example, Newsom is dumping an extra $4.2 billion into High Speed Rail, but only another $2.4 billion to repair highways and bridges. And in a sop to the teachers unions, Newsom is dumping tens of billions of increased funding into California’s public schools.

For decades, the universal solution to improving public education in California has been to spend more money. Mostly prior to the COVID disaster, during the 2019-20 school year, the estimated spending in California’s K-12 public schools – when taking into account capital spending and the state’s supplemental contribution to CalSTRS – was already nearly $21,000 per pupil. So now that Newsom has these windfall revenues, how much more will K-12 students be getting?

The base for California’s K-14 student funding is governed by Prop. 98, passed by voters in 1988. The complicated formula is generally summarized as guaranteeing that 40 percent of California’s general fund budget is allocated to K-14 education. In Newsom’s original 2020-21 budget, the K-12 portion of Prop. 98 funding was $84 billion. In the May revision, this amount swelled to 93.7 billion. Per student, that represents a rise of over $1,500. But that’s not all.

According to Politico, Newsom has promised that $27 billion of the surplus will go to K-12 schools and community colleges, an amount well in excess of the Prop. 98 increase. According to Capitol Public Radio, supplemental Federal funding of $15 billion will be going to California’s K-12 schools. Newsom also announced “$20 billion to transform California public schools into gateways of equity and opportunity,” including establishing “universal pre-k and college savings accounts for 3.7 million low-income children in public schools.”

With the revised budget just released days ago, it’s too soon to specify to what extent some of these reported numbers overlap, but it is indisputable that Newsom’s new plan for California’s K-12 public schools involves spending spending closer to $25,000 per pupil than $20,000 per pupil. Will it ever be enough?

After the Binge Comes the Bust

The problem with setting up vast new categories of public spending on education – universal pre-K, college savings accounts, massive new hiring for school counselors and other support personnel, is that these new programs create new structural, perennial costs, and that additional burden makes it even harder to adapt when the economy slows down. And someday it will, even in sunny California. 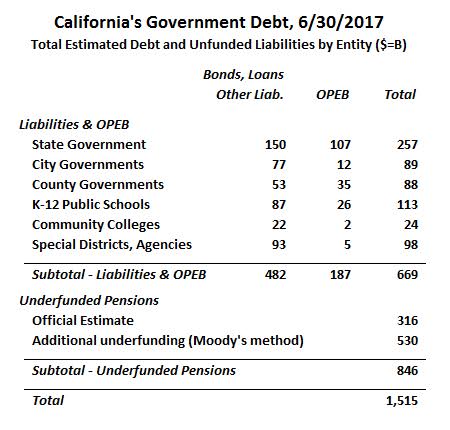 While this data is now nearly four years old, the overall picture has not changed.  Californians have continued to approve new local bonds, almost all of them for K-12 construction, adding billions in new debt at much faster rate than old debt is being retired. At the same time, California’s beleaguered public employee pension funds, notably including CalSTRS, have failed to crawl up from their officially recognized funding at about 70 percent of what is required for long-term solvency.

This is the dismal balance sheet that is being ignored by Newsom, the California Teachers Association, and every participant in today’s spending binge. Optimism is easy when you’re intoxicated, but the morning hangover is as predictable as the sunrise. What goes up, must come down. And why should public schools cost so much in California?

Relying on estimates from the Sacramento Bee, corroborated by California Dept. of Education data, there are roughly 475,000 K-12 students in California that attend private schools. Parents pay for their children to attend these schools because they offer a better education than the public schools. Otherwise, they wouldn’t pay the tuition. They’d just send them down the street to the local public school. And how much do private schools cost?

For example, an interesting 2018 analysis published by Education Next asked the question “Why Can’t the Middle Class Afford Catholic School Anymore?” The author surveyed the causes of tuition increases in Catholic schools. One of them, difficult to counter, was the gradual replacement of teachers who were members of religious orders or clergy with lay people. As they put it, there was “a decline in religious vocations and the subsequent disappearance of low-cost labor from priests, nuns, and brothers on staff.” But then the author makes a fascinating point, noting that as nationwide enrollment in Catholic schools declined from over 5.0 million in 1960 to just under 2 million in 2018, staffing levels stayed the same. Why?

The author speculates that a positive feedback loop occurred. As staff costs went up, to make ends meet, Catholic schools began to prioritize attracting affluent clientele. These affluent parents in-turn had an expectation of a high teacher/student ratio, which increased costs further, which created still more incentive to cater to parents with greater means. But in reality, as the author points out, the relationship between class size and educational opportunity is at best “complicated,” and in fact the quality of the teacher is far more determinative of student achievement than class size.

Don’t tell that to the teachers’ unions. Shrink the class size, hire more staff, spend more money. There is no amount of money that can achieve true educational “equity,” and for the education spending binge machine that Governor Newsom is feeding without reservation, that’s a good thing. Until it isn’t. School choice, in the form of schools of all types competing for students, cannot come to California too soon.