California Globe contributor Chris Micheli and nearly fifty of his lobbying colleagues released a new book of essays describing their experiences and advice for those interested in a lobbying career in state government. Based on Micheli’s past twenty-five years as a lobbyist at California’s State Capitol, he shares stories from colleagues and observations over the years.

The book, Perspectives on State Lobbying in California: Essays by Advocates in California’s Capitol, includes essays from 50 lobbyists working at the State Capitol.

“This is an effort to capture the stories of long-time lobbyists, even a few who have retired recently. The book shares their stories with the Capitol community,” Micheli explained. In addition to writing his own essay, Micheli got 49 current and former colleagues to write essays for the book, a first of its kind. These lobbyists’ perspectives are included in the book’s compilation of short essays.

Newer lobbyists who come after some of these individuals should know the stories of these advocates because they were among the first after California’s Legislature became a full-time lawmaking body in the late 1960s. 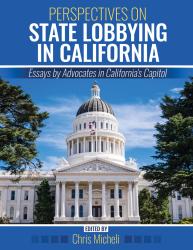 The book can be purchased from KendallHunt Publishing Company.