California Sen. Scott Wiener sent out an email Wednesday inviting me to his annual pumpkin carving event in San Francisco. And, there will be “celebrity drag queen judges and awards for winning pumpkins!”

Isn’t pumpkin carving an activity that kids usually do? Is this like Drag Queen Story Hour?

Hi Katy — I hope you’re doing well. I am reaching out because Halloween is in just a few days, and we have our annual Halloween pumpkin carving event on Saturday, with celebrity drag queen judges and awards for winning pumpkins!

It’s a really fun event, particularly after everything we’ve gone through as a community over the past 20 months.

The only thing that would make it more fun is if you were there, too!

Can you join us? (More details are below!)

I hope to see you there!

Sen. Wiener touting “it’s a really fun event, particularly after everything we’ve gone through as a community over the past 20 months” is rich since he’s one of the state leaders most supportive of the lockdowns and school closures. 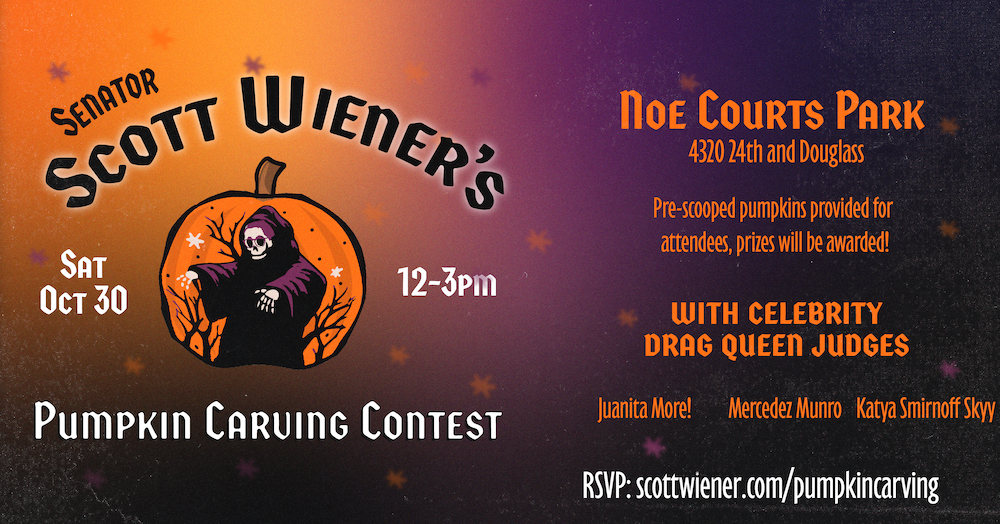 We’ll be giving out pre-scooped (!!!) pumpkins for you to carve, and we have a wonderful panel of celebrity drag queen judges (Juanita MORE!, Mercedez Munro, and Katya Smirnoff Skyy) to decide who will win our fun prizes.

We would love for you to join us. If you can make it, can you RSVP today?

The Senator’s Pumpkin Carving Contest is going to be “safe, fun, and festive,” something that does not usually need to be said about pumpkin carving.

San Francisco is ground zero for the Drag Queen Story Hour “movement” at local libraries, and there have been all kinds of issues inviting drag queens to be around children. The Federalist reported in June that Drag Queen Story Hour “has brought not just one, not two, but at least three convicted sex criminals, two of whom are convicted pedophiles, into confined spaces with large numbers of young children on multiple occasions. Its events also have been sponsored by a man who’s been charged with seven counts of child pornography possession. So much for the ‘safe space’ that drag queen ‘Miss Terra Cotta Sugarbaker’ claims the program provides.”

It’s not just a little curious that a State Senator holds an annual pumpkin carving contest judged by celebrity drag queens, and assures us that it will be “safe, fun and festive.”

Breitbart just reported that a division of the Walt Disney Co. is hosting a drag queen story hour event aimed at the children of employees, with the intention of celebrating the “gender fluidity of childhood” while providing kids with “unabashedly queer role models,” according to screenshots of internal emails seen by Breitbart News.

“Drag Queen Spooky Story Hour” is scheduled to take place virtually on Wednesday, according to an invitation sent to employees. The Halloween-themed event will capture “the imagination and play of the gender fluidity of childhood,” and will give kids “glamorous, positive, and unabashedly queer role models,” the email said.