Thursday the State Senate held their first virtual oversight hearing of the more than $2 billion in coronavirus spending Gov. Gavin Newsom has already committed. Lawmakers questioned Department of Finance officials, and in particular, the $1 Billion contract with Chinese-owned BYD to provide up to 200 million surgucal masks per month.

The hearing, which started late after technical problems, had two senators inside the Capitol hearing room, and seven on Zoom videoconference. Senators wore face masks. The public participants phoned in their questions and comments.

Sen. Holly Mitchell (D-Los Angeles), the committee chair woman, called the crisis “a public health and economic pandemic.” She set the tone for the hearing by explaining that “bold unprecedented actions” were needed “to protect public health.”

The Legislature passed Senate Bill 89, a coronavirus emergency measure, which gave stunning power to the governor to spend up to $1 billion “for any purpose” related to the COVID-19 crisis. However, Mitchell said the governor must give notification to the Legislature how the money would be spent ahead of spending, alluding to the many questions surrounding Gov. Gavin Newsom’s $1 Billion purchase of masks from Chinese company BYD.

“With 90% of our pharmaceuticals coming from China, why would we buy face masks too from them?” Sen. Moorlach asked. “Why not manufacture them here in California?”

About the contract with BYD, Curry also said she had “concerns about releasing too many details” until we are in possession of the product, because the PPE protective gear is in so much demand throughout the world.

“The concern with providing all of that information publicly is very high value, highly desired, and it could potentially open up issues with questioning decisions or creating a process outside of what we have,” she said.

It was a “we have to pass the bill to see what’s in it” moment.

Newsom’s finance officials also said that they anticipated spending an additional $6 Billion on the state’s coronavirus response, but they didn’t yet have the details on how the money would be spent.

“The course of this pandemic is uncertain, so we ask for your patience on that,” said Viswanathan, of the Department of Finance.

The hearing was also a chance to boost social justice credentials. “The virus has put a magnifying glass on the inequalities in this state,” said Sen. Anna Caballero (D-Salinas). She asked about California’s unemployment fund, noting that during the last recession, California had to borrow from the federal government to pay out unemployment claims.

Legislative Analyst Gabe Petek said unemployment claims indicate 12% to 15% of Californians have lost their jobs recently. He said economically, the state has entered a recession, and quite possibly a very bad one. Petek explained that the government faces not just a drop in taxpayer revenue, but also from the anticipated increased demand for government services such as health care and food assistance.

“It’s very likely that the state has gone from an anticipated surplus and is now likely facing a budget problem and potentially a significant one,” Petek said.

Petek added that two scenarios are possible: He’s hoping for pronounced rebound activity because of the intentionally induced economic slowdown, or if Californians are required to shelter in place at home longer, it will be at best, a sluggish economic recovery.

Either way, the state will have less money than what it has committed to spend in the governor’s largest budget in the state’s history, and inevitable cuts will be forthcoming. 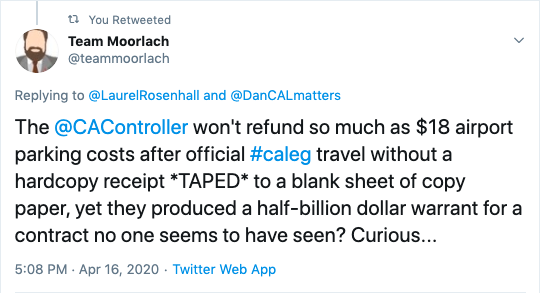