Why would a candidate for Yolo County District Attorney take campaign contributions from convicted child molesters and their families, as well as organizations seeking to defund and destroy law enforcement, and the rule of law? That question is on the minds of Yolo County residents, as well as the current DA.

The Globe spoke with Reisig about his race, his challenger, and the questionable campaign contributions from convicted child molesters, and others connected to criminal justice “reform” groups.

“These are notorious child molestation cases which received international attention,” Reisig said. “One was the case of Brett Pedroia, the brother of Boston Red Sox second baseman Dustin Pedroia, and the other went international because it involved people from Nepal. These are the two most notorious child molestation cases in Yolo County history.”

This led to a Facebook ad by Reisig calling out Rodriguez for “campaigning for criminals.”

“When my opponent was first approached about the campaign filings, she said ‘no comment.’ Then she claimed it was an attack ad. The reality is, all of these contributions are recorded, and public record. She should return the money.”

However, Reisig said Rodriguez says she turned one of the contributions over to a non-profit.

Who are Sanjay Dev and Brett Pedroia?

Ajay Dev was convicted in 2009 to 378 years in prison for sexual assault and rape of his niece/adopted daughter. According to Reisig, Dev raped the girl for years, yet his family sought and continues to overturn his conviction. Reisig said the Third District Court of Appeal upheld the 2017 conviction.

Reisig said Dev’s brother “is a witness in overturning his brother’s conviction and we have evidence Sanjay Dev submitted perjured testimony.” 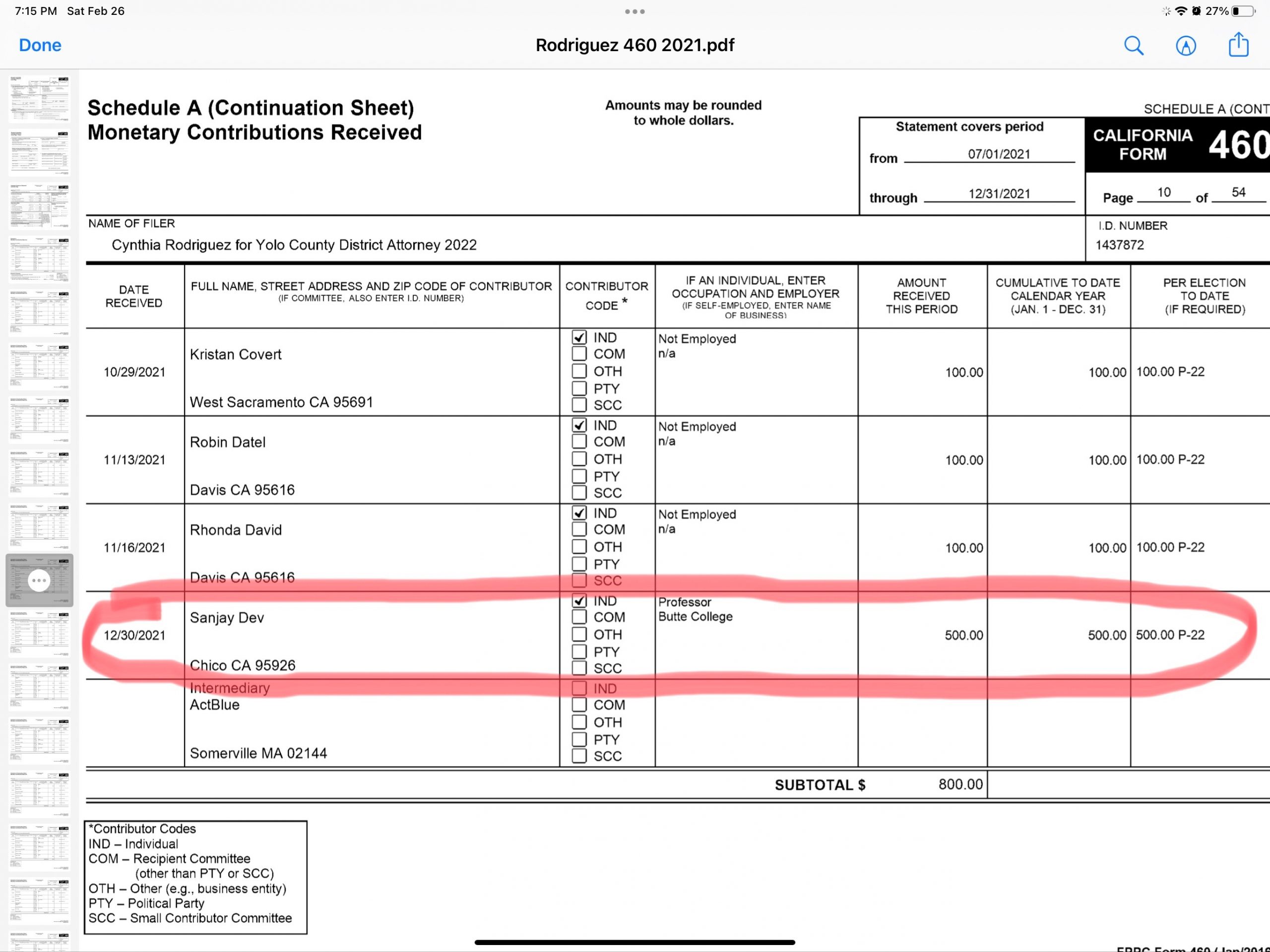 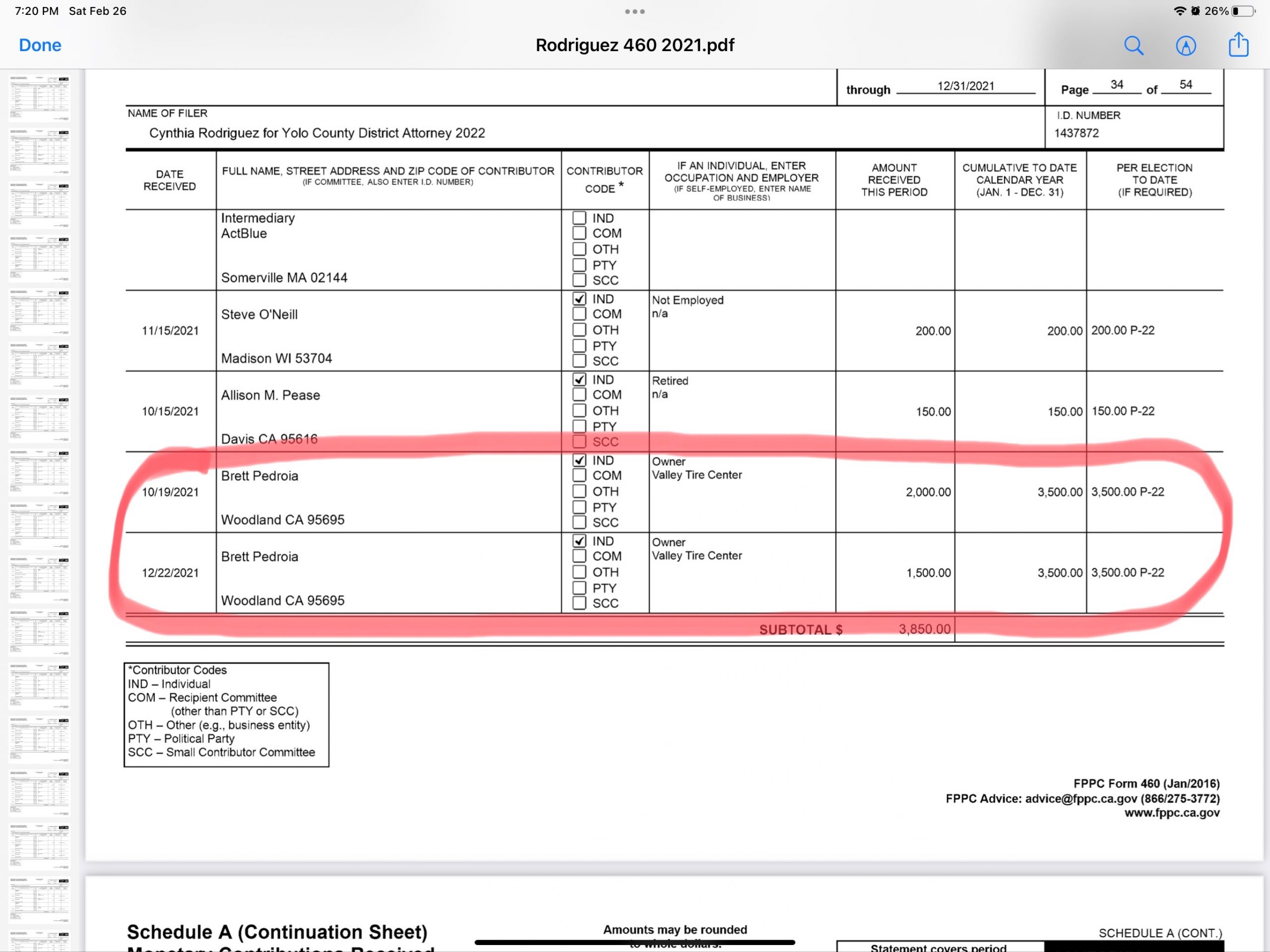 Brett Pedroia was convicted in 2009 of oral copulation with a minor. Reisig said the Yolo DA asked for 8 years in prison, but Yolo County Judge Paul K. Richardson granted Pedroia one year in jail. Some news media in the county suggested Pedroia was granted a far more lenient sentence than Ajay Dev because the Pedroia family is prominent in the region, and letters from local dignitaries on behalf of the Pedroias helped, as the Davis Vanguard reported.

Reisig said Pedroia contributed $5,000 in four separate donations, including the donation for $1,400 and $100, even after Reisig called Rodriguez out for taking contributions from convicted child molesters.

That aggregated amount given by Pedroia exceeds the limits set by CA law of $4,900 max per person.

“Pedroia said his family, which collectively made the contribution, doesn’t know Rodriguez but considers her the best candidate for DA,” the Enterprise reported. “He confirmed they have since contacted her campaign to request the funds go to a local nonprofit.”

As for motive, the Globe asked Reisig why any convicted person would contribute to the campaign of a District Attorney. “They want a new DA. They want leniency. Child molesters and rapists don’t like me because I’m convicting them and sending them to prison,” he said. “Prison is where they belong.”

“But seeing a candidate take thousands of dollars from convicted child rapists and molesters is something I never thought I’d ever see – and not just once but again, and again, and again.”

Reisig told the Globe that Rodriguez is a former Public Defender who has never prosecuted these kinds of heinous cases, or had to deal with the aftermath of the horrific crimes.

Rodriguez’s campaign priorities align with “criminal justice reform” groups seeking to diminish or do away with law enforcement including, “ineffective” mass incarceration; “prioritize public safety over mass incarceration,” overcharged cases and bias against marginalized communities, “fix past errors, decriminalize poverty, and advocate for equal treatment of all under the law.”

Added benefits of a Rodriguez DA (some would call overreach) would be to “stand up for working people by bringing charges against workplace abuse, wage theft, retaliation, and other employer crimes,” and “Hold public officials, agencies, and corporations accountable.”

Quillin is the wife of Netflix CEO Reed Hastings. “Delaney has been involved in criminal justice fights for decades, launching a foundation with her husband Wayne Jordan — a prominent Bay Area real estate developer — after voters passed a 2000 ballot proposition toughening sentencing for youth offenders.” 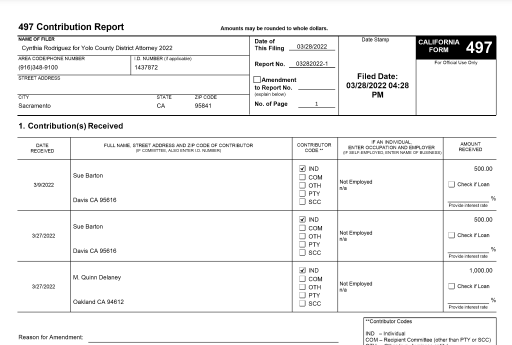 As for George Soros support, in her candidate statement, Rodriguez’s number one endorsement is “Smart Justice.” As the Globe has reported, Smart Justice California is a left-of-center criminal justice advocacy group, and a project of Tides Advocacy, with a $52 million budget. “Smart Justice California is a collective of donors that aims to overhaul criminal justice laws in California. It also attempts to influence the electorate to vote for left-of-center candidates and ballot initiatives.”

The Politico article also explains that Soros is behind Smart Justice, along with millions of Bay Area justice reform money. In the last week Rodriguez has received several thousand dollars from individuals associated with Smart Justice, according to Reisig.

“They came together in earnest in 2017 with the launch of Smart Justice,”Politico reported. “The 2018 cycle was an early test case. While an organization funded by George Soros supplied the most money, pouring millions into four California district attorney races, Quillin, Simons, Krieger and Delaney jointly spent around $360,000 on progressive candidates.”

Reisig said as soon as any candidate becomes aware of dubious campaign contributions, “you return it – you return all of that money. And she should apologize to those victims and not just those in these cases, but all child molest and child rape cases. It’s offensive and traumatizes victims again and again to see somebody running to be DA who is taking money from these predators.”