Scroll down for most current updates.

The first polls are closing in six Eastern states: Georgia, South Carolina, Virginia, Kentucky, Vermont, and Indiana. It’s too soon to call any of the races, but we will be updating key races throughout the night.

California voters are still casting votes in person and dropping off ballots. The Globe visited the Sacramento County Voter and Elections office where there was a long line of cars in a drive-through ballot drop off line. Voters were also opting to vote in person.

There are projections of more than 120 million voters in this midterm election. According RealClearPolitics, Republicans are expected to gain a 53-47 majority in the U.S. Senate.

There is a lot at stake even in deep blue California. Over the weekend, “Senate Democrats and other high level members of the Democratic Party denounced claims by California Governor Gavin Newsom made last week that the Democratic Party is getting “crushed on narrative” this election, showing further fracturing of the party only days before the election,” the Globe’s Evan Symon reported. Could the shine be wearing off California’s controversial and elusive governor?

California has several controversial ballot initiatives as well. And be sure to read about the hot contested races in California, as we reported earlier this morning (two articles).

Besides showing a rather intense distaste for Joe Biden, the exit polls reveal the economy, inflation, and abortion as top issues.

One poll asked whether “democracy was threatened” and got a 70 percent yes response.

Seems good for the Democrats?  Not really, because it does not appear if people were asked “threatened by WHAT?”

In other words, that 70 percent number – which seems high anyway – is made up of January 6-touting Dems and and angry at the Deep State Republicans, so it points to general national discontent but is far less relevant to specific voter decisions.

It’s like a “do you trust law enforcement?” query – Dems will say because of local cops, Reps will say no because of the FBI.”

We shouldn’t forget about that big bump that Republicans got a few weeks ago in polling. As FiveThirtyEight showed, economic worries and other lingering factors put a huge dent in support. I mean, look at the 27th District House race between Garcia and Smith. Smith was still within striking distance until that surge hit. Look at the graph, or this one between Salas and Valadao. It looks like the Democrat line got hit by a car battery.

That, combined with the hike in ads, is having a huge effect. Same in the LA Mayoral race, but although there we had a Democratic candidate who had it in the bag and then proceeded to blow a double digit lead in such a spectacular way that you would think her campaign was actually just a way to get a backdoor comedy pilot on NBC.

The GOP had such momentum going and an ad system in place that by the time that the races got close, the other side didn’t know what to do. No matter what happens tonight, Democratic leaders are going to do an autopsy on tonights elections and will not like what they will find.

All day I have been asked if California can be saved. Maybe not in this election, but the parent revolution taking place is a big start. Parents are running for schools boards throughout the state, in what is a try grassroots movement. Expect a new generation of citizen representatives, and citizen politicians. Just a new generation of people running for office is overdue and welcome!

As for current California politics, there is no doubting that with Republicans throughout the country predicted to win elections – local, state and national – it has to impact California races. Especially House races. Remember, current House Minority Leader Kevin McCarthy hails from California. If a Republican takeover is real in Congress, McCarthy will be House Speaker.

And I am hearing that there is Gavin Newsom fatigue – in California and especially in the rest of the country. As I asked earlier, did his star already burn brightly, and is it fading? Did he peak too early?

DeSantis and Rubio win their races in Florida – as expected.

But what was unexpected are both the margins – the wins were by an easy 10 points – and the fact that both took Miami – yes, a large conservative Cuban population, but still has 20 percent more Democrats than Republicans.

A former Obama strategist said the result shows that the “Obama coalition is dead in Florida.”

“Proposition 30 should fail because it will only accelerate business flight out of California. Even Gavin Newsom understands that.”

Republican Rep. Byron Donalds has been re-elected to Congress (R-Florida).

“Florida is where ‘woke’ goes to die,” said Gov. Ron DeSantis, in his reelection acceptance/celebration speech.

Usually when you win an election, your supporters shout “Four More Years!”

Wishful thinking or inside knowledge RE his presidential ambitions?  Or just funny and clever?

In a bit of a surprise, the Democrats appear to have held Rhode Island’s second congressional district, a bellwether that could indicate the red wave may not be as big as many expected.

Though the Democrats have held the seat for 30 years, it appeared to many observers (myself included) that this bellwether seat was ripe to elect Republican Allan Fung.

Fung led b y about 2 points for most of the evening until the portion of the city of Providence – as deep a blue city as it gets (save California) – that is part of the district came in – late, of course – giving Democrat Seth Magaziner a huge boost.  In fact it appears that Fung’s loss in Providence made up the entirety of his loss district-wide. Currently, with about 95 percent of the vote in, Fung is down by about 3 percent.

For a bit of a deeper dive on the race – and even more about this year’s seemingly unsuccessful Democrat campaign strategy – you can check out this piece: https://thomas699.substack.com/p/the-danger-of-bubble-wrap

In what could be a major blow to Eric Garcetti’s hopes of getting some kind of interesting sounding yet meaningless Biden administration job that doesn’t have to be approved by Congress, Beto O’Rourke has lost his bid to unseat Texas Governor Greg Abbott.

Why should Eric be worried?  Because his India gig is dead in the water, he was hoping to be appointed to something along the lines of Bicycle Lane Diversity Tsar.  Now, though, Biden may have to give that job to Beto, at least in part to keep him from hoovering up (took in $250 million in donations for three failed races) even more national Democratic money that could go somewhere it might be actually useful and won’t be simply lit on fire.Like the Ford Nucleon – the 1950’s nuclear powered concept car that looked like an El Camino with a reactor in the bed – Beto is – and has been for years – purely a concept candidate, something that was cobbled together in a lab in Brooklyn – okay, we got your Kennedy teeth thing, a nickname that will make people think he might be Hispanic, a brain that is perfect for TikTok, and we made sure not to give him that icky Texas redneck accent – done! – a sure winner!

Sorry, Eric – you could be the first person to lose to Beto O’Rourke

Republican Georgia Gov. Brian Kemp also sails to an easy victory against 2x Democrat challenger Stacey Abrams, 53.9% to 45.4%. Reports are that she conceded the race to Kemp, but voters want to know if she has conceded to both races, or just the 2022 election.

California Senator Alex Padilla (D-CA) won his first full-term to represent California in the United States Senate, yet the California Secretary of State shows only 7.2% of the votes have been counted. Gov. Gavin Newsom appointed Padilla in January 2021 to the Senate seat when then-Sen. Kamala Harris was sworn in at the Vice President.

“It doesn’t look like a tsunami but a wave of sorts.

Sunbelt governors are getting re-elected easily, as they are known for good governance generally.

If not for Trumpian misfits, the Senate would be radically changed. Too bad the Democrats can’t make the Republicans nominate Trump!”

California Gov. Gavin Newsom is announced as the winner by FoxLA, with 9.9% of the vote recorded by the California Secretary of State. 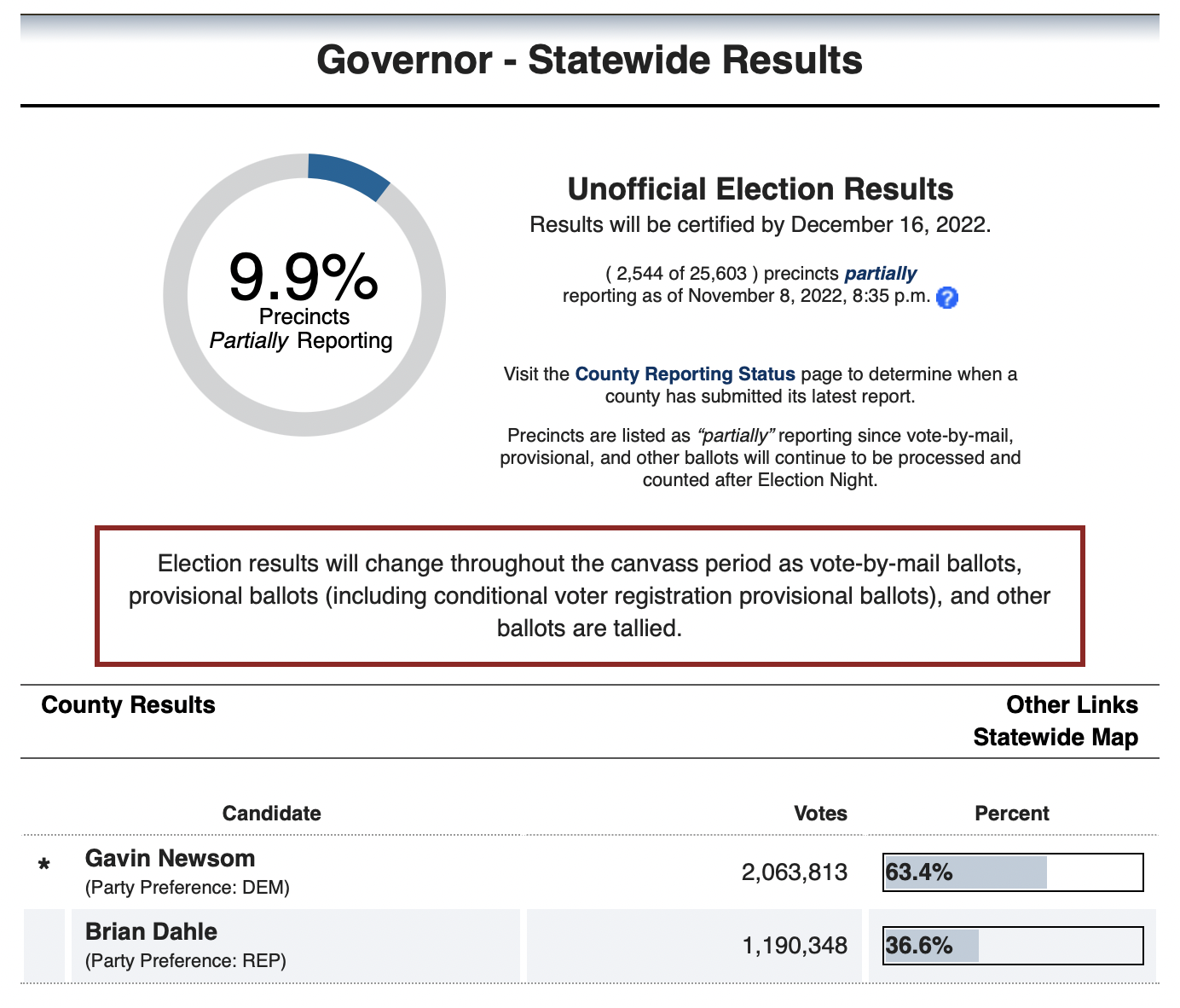 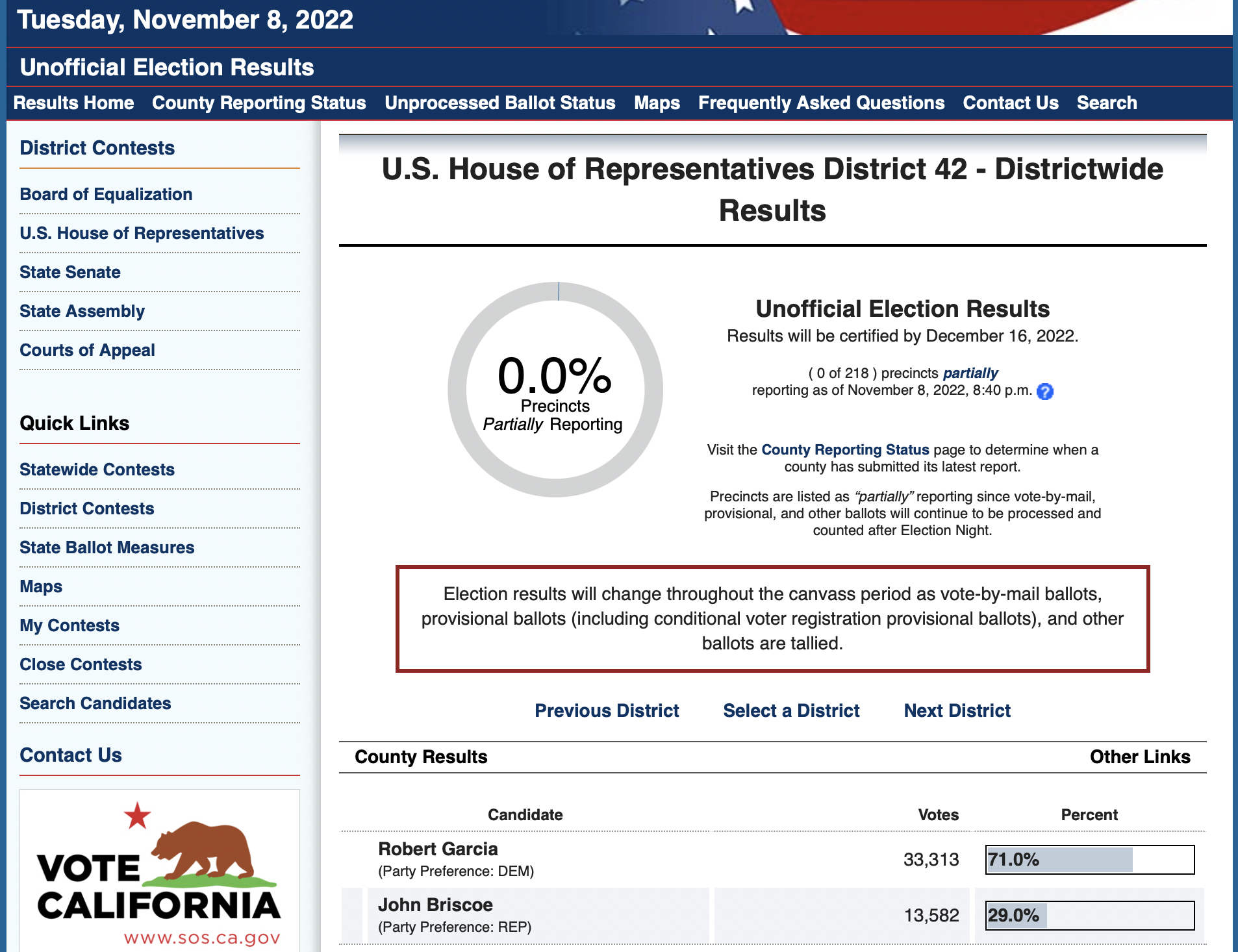 However, only a few minutes later, the SOS website updated to 100% results in: 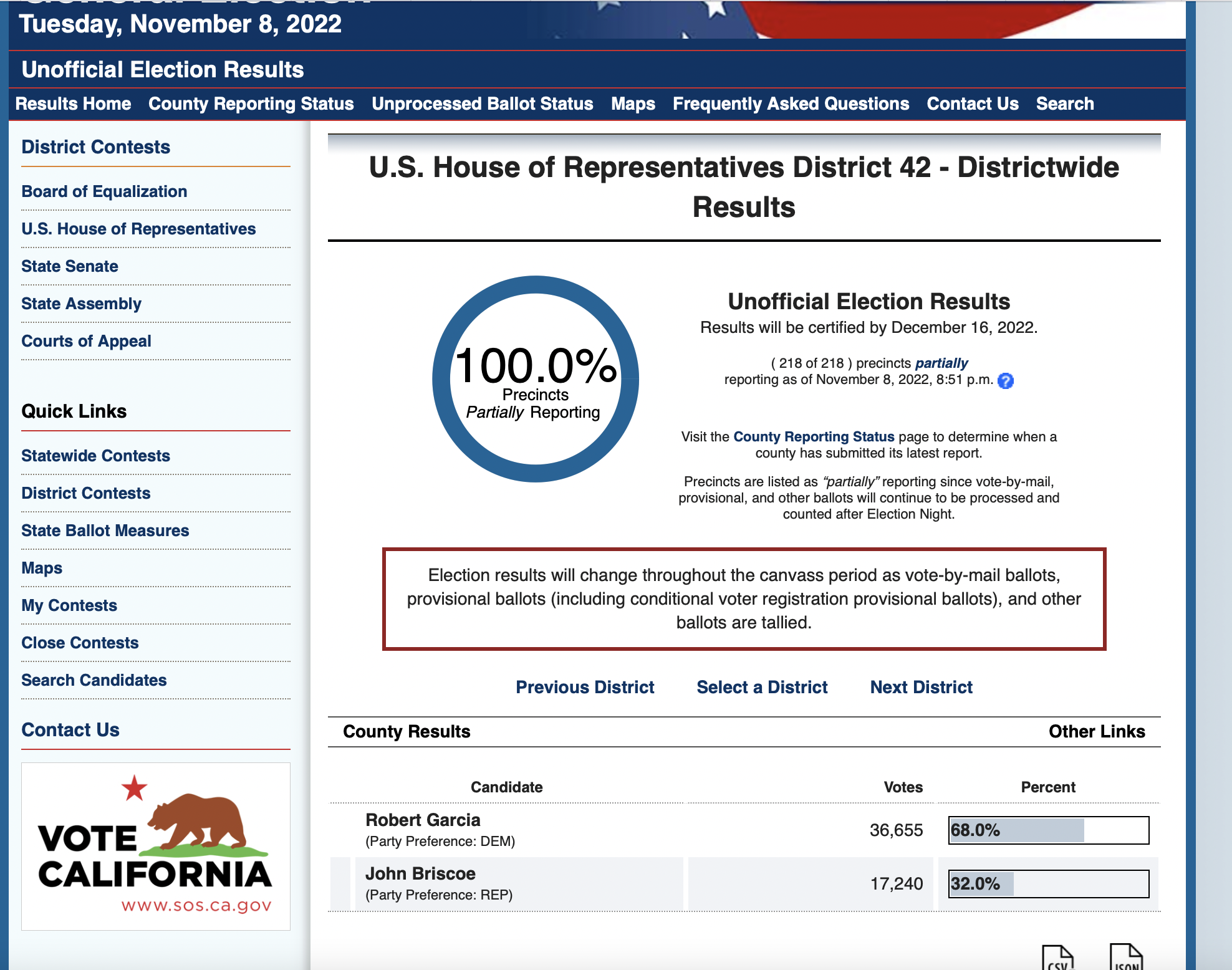 Even the Governor’s race is only reporting 31.8% of the votes in: 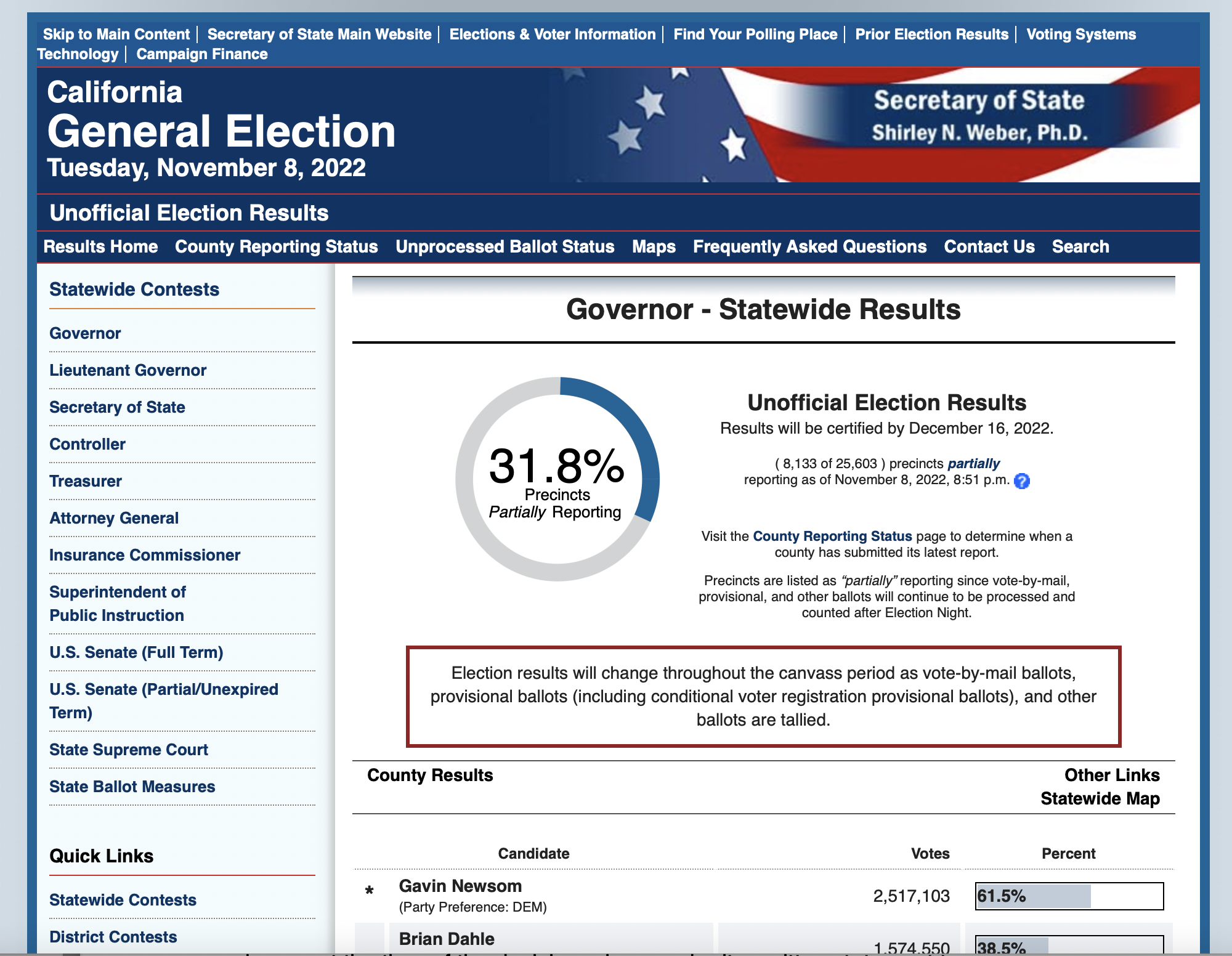 The Sacramento Bee is reporting Proposition 1 has taken an early lead. It is the initiative to provide an absolute right to abortion in the state constitution under any and all circumstances, including the vile practice of partial birth abortion. The Bee calls the initiative “abortion rights,” however, the recent United States Supreme Court decision to overturn Roe v. Wade actually “enshrined abortion rights” by sending the legal issue back to the states. California’s abortion law isn’t changing at all – it remains in tact.

Did COVID cause certain governors to benefit?  Were citizens willing to admit their governors took the wrong course, or the right course? Was there Stockholm Syndrome involved? How do we explain the case of Michigan and Gov. Gretchen Whitmer where she was just reelected, yet her constituents suffered excessively and pointlessly – just as with California citizens under Gov. Gavin Newsom, who still holds a needless State of Emergency.

Notable: By 7:15 p.m.on Election Day in South Carolina, results already showed a win for Sen. Tim Scott. In California we will be waiting 30 days for certified election results, and our Governor is still clinging to his emergency Covid powers. Hmmm. What’s wrong with this picture?

I’m seeing about 37 percent in with all the Democrats comfortably ahead, even Chen (in House race against Rep. Michele Steel). That being said, that is vote by mail and there should be a vote dump soon in the LA Mayor’s race – 50/50 there with again the vast majority mail in so that could mean happy Caruso.

With a bit less than 50 percent of the vote (mostly mail-in) counted, most of the statewide ballot measures – considering the current margins – appear to be able to be called.
Proposition 1, the abortion measure, is up by 2-1, as is proposition 28, the arts funding measure, and prop 31, the ban on menthol smokes.
Down by similar margins are props 26, 27, and 29 – expanded tribal gambling, phone gambling, and the union-backed effort that tried to get its members more jobs at kidney dialysis centers.
Losing significantly so far is the” fight forest fires but really help buy Lyft electric cars measure,” prop 30.  While it appears that it will fail to pass, it may yet be a touch early to officially unplug that particular piece of Silicon Valley welfare.

Still early in Los Angeles, but Caruso is leading and Councilman Mike Bonin’s acolyte running for his seat is losing.
On the odd side, at least two candidates backed by the LA branch of Democratic Socialists of America are leading.
On the inexplicable side, Sheriff Alex Villanueva is at this point losing badly.
Again, the votes counted so far are mostly mail-in so things could change.

Keep checking in for updates, commentary, and guest posts.