The definition of insanity is doing the same thing over and over and expecting different results.
– Albert Einstein

There is no solid evidence that one of history’s greatest geniuses ever said this, but its applicability to California’s housing crisis is too big to let attribution get in the way. Because California’s politicians are trying to solve the problem by doing the same thing over and over, and the result is always the same – the problem just gets worse.

One current example of how California’s ruling class continues to attempt fabulously expensive, laughably feeble “solutions” to increasing the stock of “affordable housing” can be found in San Francisco’s Proposition A, “Bond Issue for Affordable Housing.” Voters will decide whether or not to approve Prop. A on November 5th.

One misperception regarding these bonds may be found on the proponent’s website “Yes on A,” where they claim “this $600 million bond will fund the construction of more than 2,800 affordable housing units over the next four years.” This implies a cost of $214,285 per unit. But that’s not even half the story.

The average cost developers are turning in to construct “affordable housing” and “permanent supportive housing” in California’s big urban areas bottoms out at around $500,000 per unit. For example, in Los Angeles, the Measure HHH bond, approved by voters in 2016, poured $1.2 billion into construction of supportive housing. Three years later, with only a few units ready for occupancy so far, the estimated cost is over $500,000 per unit.

In San Francisco, the cost to construct a new apartment hovers around $700,000 per unit. At this rate, $600 million dollars will only pay for 857 apartments. Acknowledging this, proponents of San Francisco’s Prop. A intend to use most of the money to rehabilitate existing public housing. Which is to say, all this money will have a minimal impact on total housing stock in San Francisco. So what’s really going on?

To get the rest of the story, it’s first necessary to understand how any new affordable housing or supportive housing gets funded. Because of state and local policies that make it almost impossible for developers to build anything, the commercial price of a modest new apartment in California’s urban centers ranges between a half-million and $750,000 per unit. “Affordable housing” projects are no exception, and it’s important to realize that taxpayers cover 100 percent of the costs. When these bonds are issued with language that implies a total taxpayer contribution via the bond of $214,000 per unit (SF Prop. A), or $117,000 per unit (LA Measure HHH), taxpayers need to know where the rest of the money comes from – because all of it comes out of their pockets.

An illustrative example of this is found in the project summaries disclosed by the City of Oakland, showing the use of funds for their share of the Measure A1 “Affordable Housing Bond.” Measure A1, passed by voters in Alameda County in 2016, allocated $580 million for the construction of “affordable local housing.” The table shown below, taken from the City of Oakland report, shows the total project cost, and as can be seen, taxpayers funded nearly all of this project. 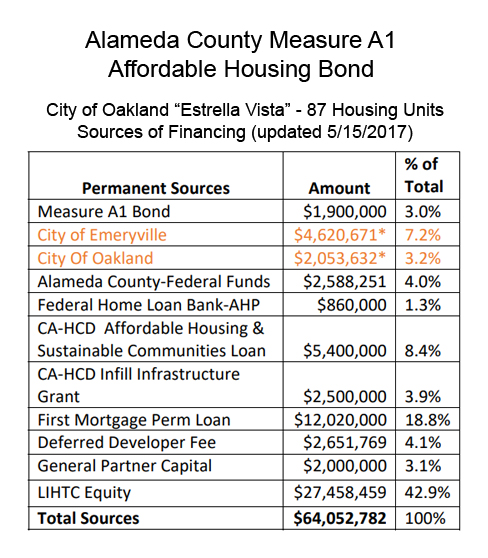 On the above table it can be seen that the Measure A1 Bond only contributed 3 percent to the construction of 87 affordable housing units. But the total project cost was a whopping $64 million, which equates to a cost of $736,000 per unit. And as can be seen, matching loans from the City of Emeryville (7.2%), the City of Oakland (3.2%), plus other federal and state sources (17.6%) constituted much of the remainder. The biggest source of funds, “LIHTC Equity,” at 42.9 percent, bears further explanation.

LIHTC stands for “Low-Income Housing Tax Credit,” and these tax credits, which can be bought, sold, and traded, represent a one-to-one reduction of a corporate tax bill. They are not a tax deduction, they are a tax credit, meaning that for any profitable corporation that pays taxes, their face value is equivalent to that same amount of cash in the bank. Who pays for tax credits? Taxpayers, since whenever taxes are avoided in one place, the resulting shortfall in tax revenues has to be covered by other taxpayers.

There are alternatives to the insanity of spending $750,000 of taxpayers money to build “affordable housing” for low income families and “supportive housing” for homeless people. The insanity of current policies should be crystal clear. According to the United States Interagency Council on Homelessness, “As of January 2018, California had an estimated 129,972 experiencing homelessness on any given day.”

By most accounts that number is understated because of flaws in how HUD manages the annual count, and the number is rising, not falling. But using that number, it would cost roughly one hundred billion dollars to get every one of California’s homeless individuals “permanent supportive housing” as it is currently designed and funded. This is impossible. This is insane. Again, what’s going on?

Once the property is converted to “affordable housing,” the owners are exempt from property taxes.

According to Thomas Busse, treasurer for the Libertarian Party of San Francisco, which is the only organization that has come out in opposition to Prop. A, “San Francisco’s ‘Affordable Housing’ is a patronage racket making housing less affordable.”

An October 7th report in the San Jose Mercury offers a vivid example of how affordable housing policies can actually increase costs to tenants. The article describes how an apartment building in Antioch was converted to affordable housing, but when the renovations were completed, the tenants actually ended up paying more in monthly rent. These renovations to existing housing (referred to in the bond text as “rehabilitating”) are exactly how most of the Prop. A money could be applied. And once the property is converted to “affordable housing,” the owners are exempt from property taxes.

Californians need to realize not only that it is insane to expect taxpayer funded housing this expensive to ever solve the state’s housing and homeless crisis, but that it has become a lucrative scam for all parties involved. To expand on the implications of the property tax exemption, for example, consider this finding by Reason Foundation researcher Marc Joffe, as reported in Fox & Hounds Daily: “Affordable housing projects are often operated by not-for-profits that qualify for a ‘welfare’ exemption from property taxes. In San Francisco, a total of $2.4 billion of real estate is shielded from property taxation due to this exemption.”

What libertarian Thomas Busse refers to as “natural affordable housing” is the only practical solution to California’s housing crunch. Streamlining the permitting process, reducing the requirements to be granted a development permit, lowering the extortionate building fees, taking away the exemptions granted nonprofit developers, and expanding the urban footprint are all ways to bring down the cost of housing. If taxpayer funds must be used, set up pre-fab homes, or, for that matter, durable tents, in low cost areas. But using government funds to convert existing housing into tax exempt “rehabilitated” “affordable housing” that costs tenants more in rent is insanity.

There are additional solutions to California’s housing and homeless crisis, but they encroach on many conventional pieties. Many of the homeless on the street, to indulge in rank heresy, are either there by choice, or severely mentally ill.

When it is impermissible to arrest and hold vagrants for petty theft or possession of hard drugs; when it is impermissible to require vagrants to move out of public spaces unless you can provide them with free and “permanent supportive housing;” when it is virtually impossible to commit demonstrably insane people to asylum care; when public shelters offer food and urgent care without any preconditions whatsoever (sobriety, drug counseling, drug testing); when the weather on the coast of California rarely dips below freezing – you will have an aggressive, problematic homeless population. Forever.

A memorable essay on San Francisco’s homeless crisis was just published in City Journal by the incomparable Heather MacDonald. She writes, “For the last three decades, San Francisco has conducted a real-life experiment in what happens when a society stops enforcing bourgeois norms of behavior. The city has done so in the name of compassion toward the homeless. The results have been the opposite: street squalor and misery have increased, even as government expenditures have ballooned.”

Another famous quote of indeterminate origin and indisputable wisdom goes as follows: “The first step in solving a problem is recognizing there is one.” San Francisco’s politicians have to understand the solutions they’re offering to solve their housing crisis and homeless crisis are insane. And they aren’t sort of insane, or arguably insane — they are batshit crazy insane.

One thought on “San Francisco’s Prop. A: Expensive Insanity Marches On”