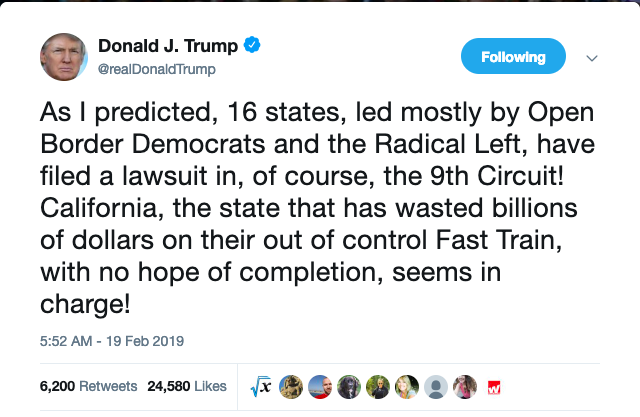 California Governor Gavin Newsom and Attorney General Xavier Becerra, leading a 16-state coalition of Democrat Attorneys General, filed a lawsuit in the Ninth Circuit U.S. District Court challenging President Trump’s declaration of a national emergency, claiming “President Trump has veered the country toward a constitutional crisis of his own making.”

The lawsuit also claims: “There is also no objective basis for President Trump’s Emergency Declaration. By the President’s own admission, an emergency declaration is not necessary. The federal government’s own data prove there is no national emergency at the southern border that warrants construction of a wall.”

“President Trump treats the rule of law with utter contempt,”said Attorney General Becerra. “He knows there is no border crisis, he knows his emergency declaration is unwarranted, and he admits that he will likely lose this case in court. He is willing to manipulate the Office of the Presidency to engage in unconstitutional theatre performed to convince his audience that he is committed to his ‘beautiful’ border wall. Today, on Presidents Day, we take President Trump to court to block his misuse of presidential power. We’re suing President Trump to stop him from unilaterally robbing taxpayer funds lawfully set aside by Congress for the people of our states. For most of us, the Office of the Presidency is not a place for theatre.”

In the complaint, Becerra alleges that the Trump Administration’s emergency declaration and diversion of funds is unconstitutional and otherwise unlawful. The states seek to block Trump emergency declaration, construction of the border wall, and any diversion of Congressionally-appropriated funds. Becerra’s lawsuit also claims “In the areas of California’s borderlands where construction of a border wall is most likely, dozens of sensitive plant and animal species that are listed as ‘endangered,’ ‘threatened,’ or ‘rare’ will be seriously at risk.”

“President Trump is manufacturing a crisis and declaring a made-up ‘national emergency’ in order to seize power and undermine the Constitution,” said Gov. Newsom. “This ’emergency’ is a national disgrace.”

At a news conference outside the White House on Friday, Trump predicted legal challenges to his emergency declaration. “So the order is signed and I’ll sign the final papers as soon as I get into the Oval Office,” Trump told reporters. “And we will have a national emergency and we will then be sued, and they will sue us in the Ninth Circuit even though it shouldn’t be there, and we will possibly get a bad ruling, and then we’ll get another bad ruling, and then we’ll end up in the Supreme Court and hopefully we’ll get a fair shake and we’ll win in the Supreme Court just like the ban. They sued us in the Ninth Circuit and we lost, and then we lost in the Appellate Division, and then we went to the Supreme Court and we won.”

President Trump has mocked the Ninth Circuit court before. When pardoning the National Thanksgiving Turkey, Trump joked, “Unfortunately, I cannot guarantee your pardon will not be enjoined by the Ninth Circuit. Always happens.”